PCC Library buildings are closed. Do not return materials. You will not be charged. Find out more about library resources and help when off-campus. 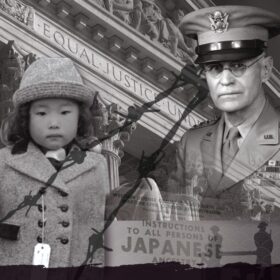 In 1942, Japanese Americans were interned per Executive Order 9066 signed by President Franklin D. Roosevelt. Locally, internees were held at the Portland Relocation Center, and while there, they published a newspaper called the Evacuzette. See a copy of this remarkable publication and explore other resources related to the internment of Japanese Americans through the PCC Library Topic Guide.

For the anniversary of Executive Order 9066, PCC is hosting a premiere of From Prisoner to President, an interview between President Mark Mitsui and his mother, Tammy. See PCC Remembers EO 9066 for additional information about this free event.

Alternative Facts: The Lies of Executive Order 9066
This film tells the untold story of false information and political influences which led to the World War ll incarceration of Japanese Americans. The film also examines the parallels to the targeting of groups today and similar attempts to abuse the powers of the government.