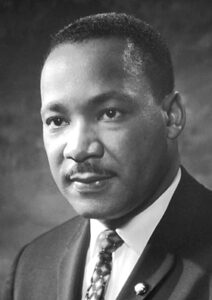 The third Monday in January is a federal holiday in celebration of the life and work of Dr. Martin Luther King, Jr. Renowned civil rights leader and youngest Nobel Peace Prize recipient, Dr. King was a proponent of nonviolent protest. For thirteen years, from 1956 until his assassination in 1968, he was the organizing force and principal voice of America’s civil rights movement. Challenging racial injustices, Dr. King was a catalyst for transformative societal changes. The landmark Civil Rights Act of 1964 and the Voting Rights act of 1965 are examples of his achievements. A riveting speaker, Dr. King’s speeches include: ” I Have a Dream,” “Eulogy for the Martyred Children,” “The Birth of a New Nation” and “I’ve Been to the Mountaintop.”

From Resilience to Black Liberation

Register for From Resilience to Black Liberation: Uprooting Systems of Inequality, a virtual racial justice teach-in presented by the Campus Collaborative (Universities and Community College partners around the Portland area.)  This event will center on the history of Portland’s Black community during, and around, Martin Luther King Day.  The event will be held on Saturday, January 23, 2021 from 10:00 am – 3:30 pm.  A variety of panels, workshops, community engagement, and facilitated dialogues will be held throughout the day.

Dr. Martin Luther King, Jr.: A Historical Perspective
This documentary traces the life of Dr. Martin Luther King and the development of his non-violent philosophies over the course of the historic Civil Rights Movement. A political and social context drapes across the story of the African-American plight, determined to find an identity through the war at home and abroad.

Dr. Martin Luther King, Jr: Look Here
One of the first in-depth televised interviews given by Martin Luther King, Jr., this program was the first broadcast on October 27, 1957, on the NBC News show Look Here. Filmed only a year after he had reached national prominence during the Montgomery bus boycott, the 27-year-old King offers host Martin Agronsky invaluable insights into his goals, his philosophy, and his unshakable dedication to equality and civil rights.

I am not your Negro
An Oscar-nominated documentary narrated by Samuel L. Jackson explores the continued peril America faces from institutionalized racism.

Voices of Civil Rights
Representing the largest archive of oral histories of the civil rights movement, this program offers a fascinating look at one of the defining social movements in American history – told through the personal stories of men, women, and children who lived through the turbulent period.

From Civil Rights to Human Rights Martin Luther King, Jr., and the Struggle for Economic Justice.
Drawing widely on published and unpublished archival sources, Jackson explains the contexts and meanings of King’s increasingly open call for “a radical redistribution of political and economic power” in American cities, the nation, and the world.

Stride toward Freedom: The Montgomery Story
This book describes the conditions of African Americans living in Alabama during the era, and chronicles the events and participant’s planning and thoughts about the boycott and its aftermath.

The Measure of a Man
In August 1958 Dr. Martin Luther King, Jr., preached two sermons, “What is Man?” and “The Dimensions of a Complete Life,” at the first National Conference on Christian Education of the United Church of Christ at Purdue University. In response to demands made by conference attendees, King allowed publication of the addresses. With King’s consent, the sermons were published by the Christian Education Press in a short book entitled, “The Measure of a Man.”

This Worldwide Struggle: Religion and the International Roots of the Civil Rights Movement
Azaransky’s research reveals fertile intersections of worldwide resistance movements, American racial politics, and interreligious exchanges that crossed literal borders and disciplinary boundaries, and underscores the role of religion in justice movements. Shedding new light on how international and interreligious encounters were integral to the greatest American social movement of the last century, This Worldwide Struggle confirms the relationship between moral reflection and democratic practice, and it contains vital lessons for movement building today.

Where Do We Go From Here: Chaos or Community?
n 1967, Dr. Martin Luther King, Jr., isolated himself from the demands of the civil rights movement, rented a house in Jamaica with no telephone, and labored over his final manuscript. In this prophetic work, he lays out his thoughts, plans, and dreams for America’s future, including the need for better jobs, higher wages, decent housing, and quality education. With a universal message of hope that continues to resonate, King demanded an end to global suffering, asserting that humankind-for the first time-has the resources and technology to eradicate poverty.

The King Center
The meaning of the Martin Luther King, Jr holiday by Coretta Scott King.

Nobelprize.org
Includes King’s Nobel lecture and acceptance speech when he won the Nobel Peace Prize in 1964.