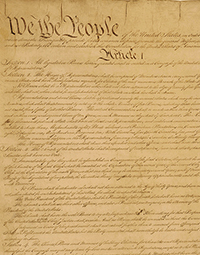 Join Portland Community College (PCC) in celebrating Constitution Day on September 17, 2019. This is a time to reflect on the many freedoms guaranteed us by the Constitution. Come by PCC Library to get free copies of the booklet The U.S. Constitution and Fascinating Facts About it.

Preamble to the Constitution:

“Congress shall make no law respecting an establishment of religion, or prohibiting the free exercise thereof; or abridging the freedom of speech, or of the press; or the right of the people to peaceably assemble, and to petition the Government for a redress of grievances.”

In honor of Constitution Day on September 17, 2019, Portland Community College Librarians have created a list of recommended materials highlighting the importance of the U.S. Constitution in guaranteeing freedom of speech and freedom of the press.

America’s Historical Documents
Includes the Declaration of Independence, The Constitution, The Bill of Rights and more.

Constitution Day – Debate it, Discuss it, Understand it
From the American Bar Association, this website has interactive features and conversation starters.

Government Printing Office: Constitution
The Constitution of the United States is available in PDF format.

The Library of Congress: United States Constitution
This site features debates, compromises and other events that occurred in the process of getting the Constitution approved.

United States Senate: Constitution
Explore various articles, charters, federalist papers, amendments, the works of the Continental Congress, and the convention that finally authored the Constitution of the United States.