This content was published: October 6, 2014. Phone numbers, email addresses, and other information may have changed.

Portland Community College starts its 53rd year in the midst of its largest makeover ever. From new buildings and renovated facilities to developing a new five-year strategic vision, PCC is soaring through plenty of change.

As the 2014-15 academic year officially gets rolling each campus is evolving thanks to the 2008 voter-approved $374 million bond measure. This month, PCC is celebrating Southeast Center becoming a comprehensive campus with a large celebration on Saturday, Oct. 18. As a result of upgrades and new construction, students can now complete requirements for an associate’s degree at the new Southeast Campus. This comes on the heels of the Swan Island Trades Center, a new 20,000-square-foot trades education building, that opened earlier in September. It is a center for trades and apprenticeship training as well as a resource for continuing education, retraining and professional development for Swan Island businesses. 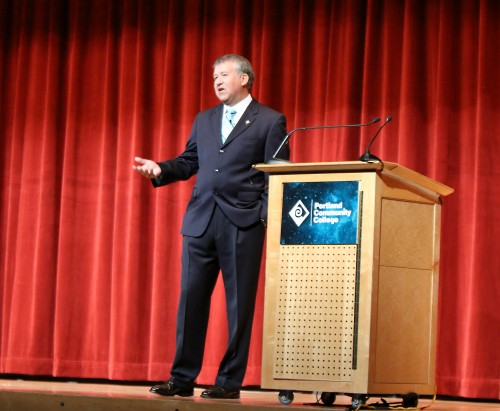 ‘As we launch our college strategic plan in the months to come, we will embark together on a journey to places we’ve never been,’ PCC President Jeremy Brown told attendees at this year’s In-Service.

But that’s not the only thing changing. Portland Community College has launched a strategic visioning process to identify goals and initiatives for the next five years to help guide the college and assist with its upcoming accreditation.

“As we launch our college strategic plan in the months to come, we will embark together on a journey to places we’ve never been,” Brown told attendees at this year’s In-Service. “And that will be both challenging and thrilling. As we all know, the start of each academic year is a much-anticipated launching point, a chance to move forward, aim higher, learn more, achieve more. As more people look to PCC as the primary route to achieving their educational and career goals, and as the state looks to PCC as the lynchpin of its ‘40-40-20’ plan, we have a responsibility to think in new ways about what’s next.”

This process, which has been led by a blue-ribbon Strategic Planning Steering Committee made up of staff, faculty and students, presents an opportunity for everyone at PCC to think about how to respond to serving the students of tomorrow and their needs. When approved by the Board of Directors this fall, the five-year strategic plan will enable PCC to better chart its future amid many uncertainties.

These include the evolving higher education landscape where technology is changing how students learn and do business at the college, and how instructors teach; the overhaul of higher education in Oregon as completion and achievement of state goals are being emphasized; accommodating the changing demographic of students and their needs; redefining the community college concept in the 21st century; and the PCC Board of Directors’ need to prioritize limited resources and have a guide to future decision-making.

At In-Service, Brown led the college in strategic planning workgroups to gain input on this plan. The breakout sessions were packed with staff and generated lively discussions. Brown said he has been impressed with what he’s seen. 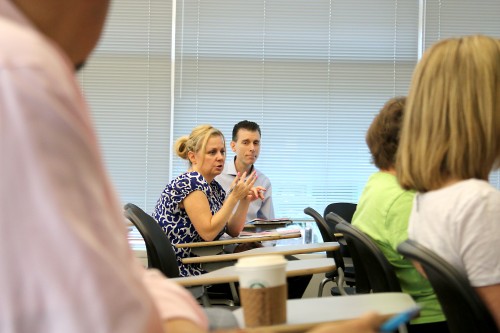 At In-Service, the college leadership organized strategic planning workgroups to gain input on the plan. The breakout sessions were packed with staff and generated lively discussions.

“I dropped by several breakout sessions to hear first-hand your thoughts on the strategic plan,” Brown said. “I heard many cogent and constructive observations. I heard profound insights about the nature of our work and the natural tensions that occur as organizations grow and evolve, embrace new ambitions and become subject to ever-more-complex pressures. It was a fascinating and important discussion, and many amongst you expressed a strong desire to keep the conversation going. I agree.”

Once the plan is approved by the Board, PCC will move to the second phase in identifying priority actions and initiatives.

Degree Completion – PCC moved into the top-ten for degree completion in the nation among community colleges. According to a list compiled by the U.S. Department of Education, PCC ranked fifth in awarding associate’s degrees for the 2012-13 academic year. In total, the college awarded more than 4,200 degrees for that period.

Model Career Pathways – At a press conference this summer, President Barack Obama and Vice President Joe Biden signed the Workforce Innovation and Opportunity Act and named Portland Community College’s Career Pathways Program as one of 30 examples nationwide that are making a difference in job training. The White House wants to use those examples like Career Pathways to replicate them across the country.

MakerSpace All the Rage – This summer, Sylvania’s MakerSpace lab became a star. From student Jordan Nickerson fabricating his own prosthetic hand to Latinas learning about cool new technology in the Girls Wearable Tech Camp, the MakerSpace was riding high at PCC and in national media.

New Leadership – This will be the first full year for some key PCC leaders. Karin Edwards is the new president of the Cascade Campus and Sandra Fowler-Hill is the president of the Rock Creek Campus. Suzanne Johnson is currently the interim president for the Sylvania Campus.

Basketball Repeat? – Later this term, the PCC men’s basketball team will begin defense of the NWAACC championship. It was the college’s first athletic championship since the 1970s and was punctuated by a turnaround in not only play on the court, but academics of the players, all in honor of the late board member and community leader Harold Williams.

x by Rita 7 years ago

I am a student at PCC. I love being around such a diverse group of staff and students! However, I haven’t seen any developmentally disabled students in any class I have been to whether it be regular or developmental education classes. I wonder whether PCC has overlooked this group. In any case, this group needs to be recruited and any barriers to higher education for them need to be removed so that they are given the same opportunities in life as their non-disabled peers. Maybe then there won’t be such a high unemployment rate (88%) among this group of people and they don’t have to be poor all their lives just because they were born with a disability.

From attending other community colleges in the past, along with some four year universities, I believe Portland Community College to be the best by far. I have found they offer more programs in an academic plan or more courses for people interested in vocational careers. Everyone I have been in contact with at PCC are top notch professionals I would recommend to anyone at any age. Another thing I have noticed is that the textbooks cover the most up to date information on the subjects I have covered so far. I feel PCC can provide anyone with a top notch education if they choose to attend. Thank you, Peggy

x by John Doe 7 years ago

All that they are “boldly” going toward is policies which benefit management and screw over both teachers and students. This is a bunch of doubletalk garbage. This new president is a joke.