This content was published: March 24, 2014. Phone numbers, email addresses, and other information may have changed.

A commitment to academics helps the Panthers win one for Harold

It wasn’t on the scale of the 1977 NBA title parade for the Trail Blazers, but the small championship celebration on Tuesday, March 11 was no less important for basketball fans of the Panthers.

An enthusiastic crowd at the Cascade Campus (705 N. Killingsworth St.) dining hall honored the Portland Community College men’s basketball team with much jubilee. A big gold trophy sat near a podium while head coach Tony Broadous and his collection of stellar players made their way through the throng of well wishers, high-fiving and hugging anyone within reach. 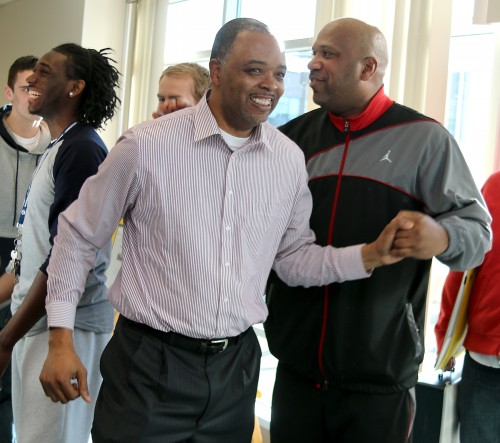 “It’s been really fun,” the coach said of the response by fans and PCC community. “The feedback we’ve gotten has been fantastic.”

Why such a collective enthusiasm by so many people? Broadous, 46, took a team that had won once in two years (2010-2012) out of a total of 47 games to become Northwest Athletic Association of Community Colleges champions this season. He guided the team to a 23-9 record and a share of the South Division title with a 10-4 league mark, earning co-coach of the year accolades as a result. It’s a stunning turnaround for a program that was used to losing more than it won and had trouble finding players to field a team just a year and half ago.

“It’s been really fun,” the coach said of the response by fans and PCC community. “The feedback we’ve gotten has been fantastic. It’s really cool. Not just for me, but I really enjoyed seeing the guys having people come up to them saying how great they were and how proud they are of them. This is definitely more rewarding than the other successes I’ve had.

“We wanted to put two banners in a gym where there’s none,” he said about his goals at the start of the season. “Some people may of thought, ‘well that’s crazy. You’ve never been to the tournament.’ We didn’t feel like that. We felt we could win the NWAACC championship.”

The spark for “Tony’s Turnaround” began almost two years ago when Broadous was announced as the new head coach of the men’s basketball team on June 12, 2012. It was a homecoming for the coach. A Jefferson High School graduate, Broadous grew up playing pickup games at the Cascade Campus’ old gymnasium. He served as the head coach of nearby Grant High School for 10 years before coming to PCC, earning the Portland Interscholastic League Coach of the Year award twice and leading the team to the Oregon 6A championship in 2008.

The move largely came as a result of a recommendation by the late Harold Williams, a PCC Board member at the time representing North Portland, who said at Broadous’ press conference, “This is a great step forward for PCC athletics. I’ve known Tony for a long time – he’s from this neighborhood and he’s a great fit for PCC basketball.”

The day he was hired, Williams and Broadous spent time together planning the future of basketball at PCC. Afterward, the new head coach took Williams home. That night, Williams had a stroke and never could recover. The longtime community leader, who had been a member of PCC’s Board of Directors since 1990, passed away on July 1, 2012 at the age of 69.

“He was so excited about this, about my hiring, and he goes home and has the stroke and he never gets to see his vision come true,” Broadous remembered. “But he lived a great life. I always kept him in my mind and I just began to work hard.” 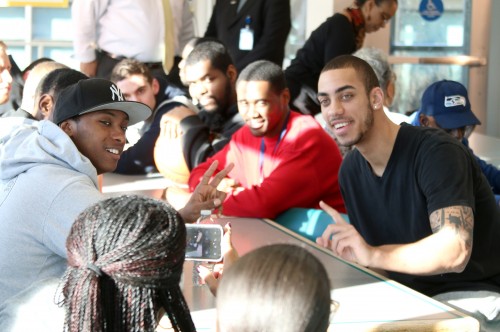 The job, though, would be very hard. Before being hired, Broadous had watched the Panthers lose by 40 points at the Cascade gymnasium and heard that the program had just six players (the others were lost to poor grades).

“That really hurt my heart because I’m a Portland native, born and raised here, and I grew up right over here on MLK and Ainsworth,” he said. “I began to think, ‘what can I do? Could I come over here and make some good things happen?’”

Broadous, who played collegiately at Lane Community College in Eugene, hired Tyrone White and Aaron Bell, both former NWAACC players at Chemeketa and Grays Harbor community colleges, respectively, to be his assistants. Even though the staff was behind in recruiting for the season, they found players and established rules and high expectations, on and off the floor.

As a result of a commitment to academics, the Panthers didn’t lose anyone to grades thanks to volunteer study hall coordinators Jay Klusky the first year and Bradley Muhammad this season. The two, along with Athletic Director Richard Magruder and Program Assistant Maura Stine, made sure the players got the mentoring and all the academic assistance they needed to succeed. On the court, everything just came natural for Broadous and his crew.

“We ended up putting together a good group of guys that really competed,” Broadous said. “Commitment was the No. 1 thing – you had to be committed to your team and have to be committed to school. We just had that combination of guys, playing together, working hard, and believing in each other and we were on a mission.”

That mission would never have been accomplished without that spark from Harold Williams.

“I think about him all the time,” Broadous said. “As coaches we’d get together for a post-game meeting and talk about how proud he would be right now and the fact we wanted to go ahead, continue to do the best we could and be as classy as we can just like he was. If it wasn’t for him the basketball program probably would have gotten cut. He was a real advocate of keeping athletics here for PCC.”

x by Linda Browning 8 years ago

Congratulations to Mr. Broadous and the entire Panther team! We are very proud of you.

x by Kate Chester 8 years ago

What a beautiful article! Tony and his players should be so proud of themselves — as we are of them! Thank you, James, for covering such a “feel good” story!

Absolutely awesome! PCC is the perfect place to combine athletics and academics. Students learn life lessons in both arenas. Very pleased to see this news…we celebrate the Seahawks, the Blazers, the Timbers, etc. Now we get to see public recognition for the PCC Panthers! YEAH!

x by Nicholas/Christopher Wickliff 8 years ago

Proud of you. God Bless you & family

x by Jennifer McBratney 8 years ago

James, this is a wonderfully written article. The players of the team are showing the entire PCC community that high academic achievement and successes are all possible at PCC. We are so proud of all the men and women who play basketball for PCC. You are setting a wonderful example for all of our students. Well done

[…] just one game between 2010-12 until the college hired Tony Broadous as head coach. Last year, the Panthers went 23-9 and 10-4 in their league before storming through the league tournament playoffs to capture the […]