This content was published: March 4, 2014. Phone numbers, email addresses, and other information may have changed. 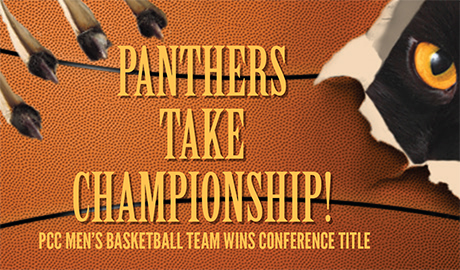 Josh turner led the way with a game-high 23 points, in what was a true team effort from PCC. No fewer than six Panthers scored in double figures. Portland jumped out to an early lead and held off Pierce in a tense second half to take the game, and the laurels, from Pierce in Kennewick, Wash.

PCC Head Coach Tony Broadous and his team were not immediately available for comment.

PCC opened the NWAACC Tournament on March 1 with a narrow 56-54 victory over Lower Columbia CC. They followed up with another nail-biter, a 1-point, 77-76 win over Bellevue in the second round.

Not bad for a team that before this year had never reached the post-season.

“It feels wonderful!” sophomore Carl Appleton said after the Panthers’ playoff-clinching home with over Chemeketa Community College on Feb. 19. “This is the first time it’s ever been done – bringing the playoffs to PCC. It’s a beautiful thing, man!”

PCC entered the NWAACC Tournament as the No. 1 seed, and as co-champions of the conference’s South division.

“We’re going up there with the intention of winning the whole thing,” said second-year Head Coach Tony Broadous before the tournament. “Only the best teams will be there, but we have a solid group of men and we’re confident we can win.”

Tonight’s championship game represents a dramatic reversal in the fortunes of PCC Basketball, which to this point has been relegated to spectator status during the post-season. The turnaround began last year when Broadous and his longtime assistants, Tyrone White and Aaron Bell, arrived and made it known that the program now faced higher expectations.

“The groundwork was laid last year,” Broadous said. “We refused to be defined by what had happened before. And this year, we added a few key men who enabled us to take the team to the next level.”

Foremost among the priorities instilled by Broadous and his staff was a commitment to academic excellence. With the help of two dedicated volunteer study hall tutors, Jay Klusky and Dr. Bradley Muhammad, the team buckled down, hit the books, and didn’t lose a single player this season to academic ineligibility. 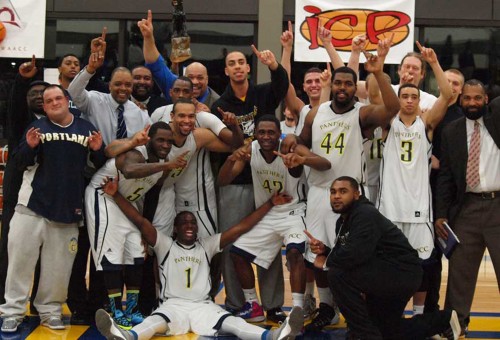 The PCC men’s basketball team celebrates their historic advancement to the NWAACC Tournament.

“We really work hard on academics, and on making the guys understand that basketball is a short piece in life,” added Broadous. “It’s lots of fun and it’s really rewarding, but in the end it’s two games a week for a brief time while they’re young. Getting an education is far more important.”

This commitment to academic achievement is mirrored on PCC’s women’s team as well. Across both teams, the players maintained an average GPA of 3.0, including four perfect 4.0s on the women’s team.

The team’s new attitude, along with the coaching and mentoring of Broadous, White, and Dell, is paying dividends. The Panthers are poised to reach greater heights than they’ve ever before attained.

“I can’t wait to see what’s next,” said sophomore C.J. Easterling after the win over Chemeketa. “We’re ready.”

And ready they were.

x by Luis 8 years ago

x by Jessica Howard 8 years ago

The entire college is so proud of the team and this great accomplishment. Congratulations, Panthers!

x by Jim Fasulo 8 years ago

Congratulations to the PCC Panthers Men’s Basketball team!
This is a great story in two ways….first, the incredible
turn around by Coach Broadous in such a short time (terrific
coaching!) and for the academic success these players have
achieved under Coach Tony’s guidance.

x by Teresa Salinas 8 years ago

What an excellent way to end the season. May you be an inspiration for all students that at PCC the “impossible” is not.

x by Danese Jundt 8 years ago

We watched the semi-finals on Monday and the championship game last night on an internet live stream and it was awesome!! Thanks to Abe Proctor for sending those emails with the links so we could see and celebrate this tremendous achievement! We have an extraordinary group of talented players, coaching staff and support staff! And our team consists of local Portland and Vancouver players! We couldn’t be happier for everyone hailing from PCC!!!

x by Jennifer McBratney 8 years ago

Congratulations!!! We are so proud of you and all the work and effort you put it. You should be proud of yourselves as well, you’ve created history for PCC. Good job.

x by Linda Reisser 8 years ago

We are so proud of our players, and so grateful to the coaches and staff for supporting this great leap forward!

x by Karen Morgan 8 years ago

The guys have been amazing to watch all season. We owe Tony, the Coach, an overwhelming round of applause. It is his vision and tireless efforts that made this possible at PCC.

x by Demarcus White 8 years ago

x by KJP 8 years ago

Great win, great consequences all around. Great final score, too!

x by William Butler-Paisley 8 years ago

Go Panthers! Is it too early to start talking about a repeat?

x by Katy Nadal 8 years ago

Congratulations! It’s great to learn that team effort and hard work came together for such a successful season. Thank you players, thank you coaches.

x by Matt Schenk AS (and band Virtual Zero!) 8 years ago

I am impressed by the new coaching and player talent! Grats!

x by PCC 8 years ago

Awesome season, thanks to all the players and coaches for all their skills and talent. It has been proven once and for all.

WAY TO HUSTLE, BROTHERS! KEEP TAKIN YOUR VITAMINS AND SAYIN YOUR PRAYERS!

x by Feature: A commitment to academics helps the Panthers win one for Harold | PCC News 8 years ago

[…] 46, took a team that had won once in two years (2010-2012) out of a total of 47 games to become Northwest Athletic Association of Community Colleges champions this season. He guided the team to a 23-9 record and a share of the South Division title with a 10-4 league […]