This content was published: September 15, 2014. Phone numbers, email addresses, and other information may have changed.

Miranda O. Salinas and Ariana Rivera gather around a mannequin wearing a hoodie, putting the final Panther “markings,” or black decals and other artwork on the apparel. To the outsider, it looks like a normal hoodie, made of a cotton and sporting Portland Community College logos. But when one of the girls puts it on, eyes on the hood light up as sewn-on electronic circuits blink, vibrate and sense body temperature. Immediately, the subject gets into a Panther pose, complete with clawing hands and scary growl. 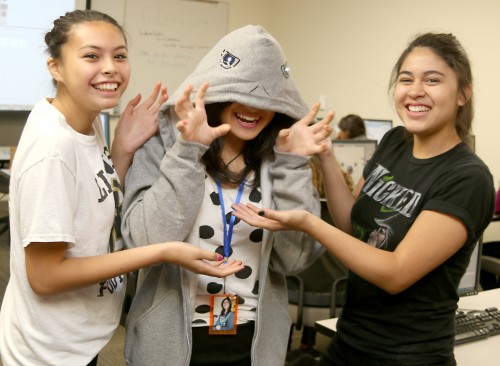 Salinas, 15, a sophomore at West Linn High School and Rivera, 16, a junior at Hillsboro’s Century High School, were part of the Wearable Tech Summer Camp at the Sylvania Campus’ MakerSpace in August. MakerSpace is an interdisciplinary innovation studio with more than a dozen 3D printers and scanners, CNC machines, lasers, and more. In total, 14 high school girls recruited through Adelante Mujeres and Rock Creek’s Las Hermanas Conference last spring gathered to learn about the intersection of engineering, design and fashion.

“My favorite part of the camp was learning the new technology,” Rivera said. “The LilyPad was my favorite thing. We learned how to do coding on it. That was really fun and new.”

Salinas nodded in agreement, “Yeah, I like the coding and learning how to make all the different technology.”

The aforementioned electronic LilyPad is the flowery technological device sewn onto the hoodie that sends the commands to the lights and vibrating circuits on the fabric. It’s used as the brain of the wearable technology, sensing movement and then sending orders to lights or electronics on the sweatshirt. It’s a device the girls were trained on during the four-day camp and is just one example of the type of technology that was introduced. The girls also made safety goggles with small LED lights, created necklaces from a laser cutter and fabricated bracelets with LED “bling.”

PCC has ramped up its Maker collaboration ever since it opened at Sylvania earlier this year by forming camps, partnering with companies like Intel and participating in Mini Maker Faires. The college’s MakerSpace offers an opportunity for staff and students to collaborate and bring ideas to life, a place where budding scientists, technologists, engineers, artists and mathematicians can find common ground to collaborate on cool ideas. A computer science student is even making his own prosthetic hand at the space. 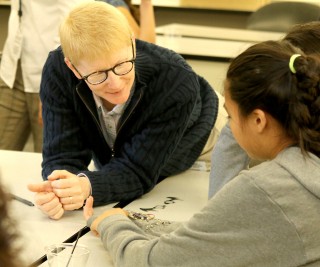 Sylvania Campus Interim President Suzanne Johnson has a chat with Salinas and Rivera during the Wearable Camp’s fashion show.

The Wearable Tech Camp is just another way that the college is trying to introduce STEAM-related (Science, Technology, Engineering, Art, Mathematics) studies to populations that may not have the opportunity or the encouragement to join related programs and careers. It’s a chance to spark interest in high school girls in the engineering fields and show them they can be as talented and successful as boys. The camp illustrated to girls the wide range of applications that engineering can take, especially in the worlds of design and fashion. Basically, it can be a whole lot of fun.

“There is an ‘Intro Digital Tech’ class at my school and they work with 3D printers and laser cutters,” said Rivera as her fellow campers rushed to put final touches on their wearable devices they made for an impromptu fashion show. “I’ve never taken the class. But to be able to see (the technology) here and see how it actually works is really cool. I know I wanted to do something in the science field, but I wasn’t completely sure exactly what it would be. Having this camp has definitely sparked my interest in this area.”

For Salinas, she knows her high school has a giant computer lab that, “they use for the technology stuff.” Now, after going through the Wearable Tech Camp and learning about the wide variety of technology, she plans to visit that lab more often this year.

“I didn’t really think that it would to be that fun when I first came here,” Salinas said of the PCC camp. “It seems like the people here at PCC are happy with their jobs, which is really cool. Then I realized that this technology was really fun and that you can do so much with it.”

For one PCC faculty, wearable tech did a lot more than vibrate, blink lights or sense temperatures. It saved a family member’s life.

x by Teresa Salinas 8 years ago

x by Feature: Wearable Tech Series: Thanks to a shirt, instructor’s mom is alive and well | PCC News 8 years ago

[…] Rep. Blumenauer expressed interest in visiting a community college civics course and PCC is made it happen. He stopped by Nicholas Paine’s “U.S. Public Policy and Democracy” course to take questions from the 30 or so students and talk about the economy and foreign policy. From there, the Congressman visited the MakerSpace lab to learn about the latest on the Maker movement. Staff and students talked about the interdisciplinary innovation studio dedicated to the art and science of making ideas real through technology: rapid prototyping machines including 3D printers and scanners, CNC machines, lasers, vinyl cutters, sheet metal tools, and a plastic injection molder. The lab was made possible in part by Intel and has produced numerous success stories this summer – Jordan Nickerson’s new hand and Latinas learning about wearable tech. […]