This content was published: September 22, 2014. Phone numbers, email addresses, and other information may have changed.

Wearable Tech Series: Thanks to a shirt, instructor’s mom is alive and well

Engineering instructor Gregg Meyer knows intimately what wearable technology can do for people.

He took a break from a girls wearable tech camp at the Sylvania Campus in August to chat with visitors and representatives from the PCC Foundation, the college’s philanthropic arm. The camp means much more than just another new technology that’s becoming all the rage. For Meyer, it’s personal. 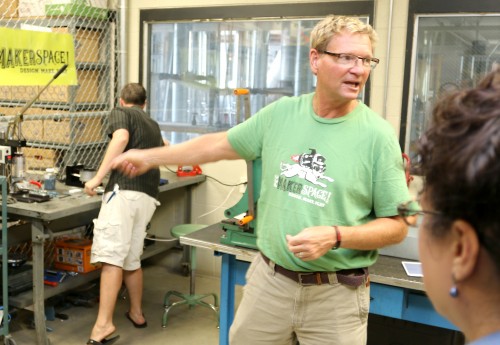 “My mom’s life was saved by wearable tech,” he said, standing in front of diagrams he sketched on a white board. “She was having all sorts of medical problems so they outfitted her with this wearable device that she actually wore around for three to four days collecting heart rate and all kinds of vital statistics. She got a call from a center in Pennsylvania asking her, ‘Are you alive? We’re monitoring your heart rate and your heart recently stopped for nine seconds and you should not be awake, if not alive, right now.’”

Meyer said the emergency personnel then instructed her to call a friend and have herself transported to the nearest emergency room. She eventually had a pacemaker put in and is fine today – all thanks to a smart shirt.

This story helps illustrate the impact that wearable technology can have on people’s lives. Sure, blinking LEDs, temperature controls and vibrating fabric is pretty cool, but wearable tech can also mean shoes that react to movement to help avoid bad falls for the elderly or smart watches that monitor vitals. The list of applications is pretty crazy.

Having the technology hit so close to home has helped spur Meyer’s involvement in introducing the technology to PCC and to high school students in the community. He was instrumental in establishing the Wearable Tech Summer Camp. The camp introduced STEAM (Science, Technology, Engineering, Art, Mathematics) studies to the girls, mostly Latinas, who typically don’t have the opportunity or the encouragement to get into related programs and careers. 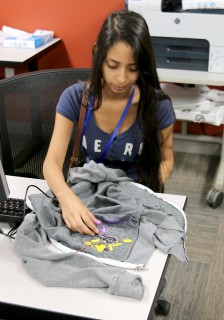 The girls in the Wearable Tech Camp were able to use all of the machines and tools available in the MakerSpace. They got to learn that engineering is much more than designing fighter jets, quad coppers, or robots.

The camp was made possible by a $120,000 Oregon Department of Education grant to PCC to assist in incorporating dual credit engineering programs into local high schools. With the Wearable Tech Camp, which also introduced the girls to industry experts in fashion, health, engineering, anthropology and business, it was a way for the college to satisfy requirements and assist in the mission.

“We wanted to come up with a way of marketing those high school classes and since part of that grant was getting more under-represented minorities into those programs we came up with this idea of a wearable tech camp,” Meyer said. “The growth in this area is going to be insanely cool. It’s really something that students need and want. This idea of merging textiles, mechanics and electronics into something that is fun is our main goal.”

The girls were able to use all of the machines and tools available in the MakerSpace. They got to learn that engineering is much more than designing fighter jets, quad coppers, or robots. It can mean coming up with something a person can wear that can affect the human body and society.

“The girls are having fun,” Meyer said at the time of the camp. “None of them knew each other coming into the camp. The overarching goal is to get them to see themselves as future technologists, get them to break the stereotype barrier in their mind of, ‘I’m not a good math student and I can’t go into engineering.’ Through this discussion, I wanted to dispel that.”

The camp aims to give the girls the confidence and excitement to find their path engineering. Meyer said for many girls who attended their families may not be supportive and the students must combat ignorance and perceived social norms of what girls should be interested in.

“They are going to have to own that themselves,” Meyer said. “They have to want it and latch onto it and say, ‘Hey that’s cool enough to where I’m just going to go for it and not let anybody get into my way.””

Missed Part 1 of this series? Check it out!

x by Donna Bezio 5 years ago

This is so terrific! Will they offer this again for girls?

x by Linda Gerber 5 years ago

This is a terrific opportunity for young women in our community. The Maker Space is generating enthusiasm about STEAM careers in young men and women. How cool is that? Thanks to the Sylvania Campus Engineering Department for making this happen, to Dean Dieterich Steinmetz for his incredible support, and especially to Greg Meyer who championed the idea through the college bureaucracy to make it a reality.