This content was published: August 25, 2014. Phone numbers, email addresses, and other information may have changed.

The ranking is part of the publication’s annual Top 100 Associate Degree Producers Special Report. PCC also ranked 11th overall when the list combined all four-year universities that offer two-year degrees. The list was compiled from 2012-13 academic year degree completion statistics provided by the U.S. Department of Education. PCC, which awarded 4,217 degrees in 2012-2013, moved up six spots from No. 11 last year. 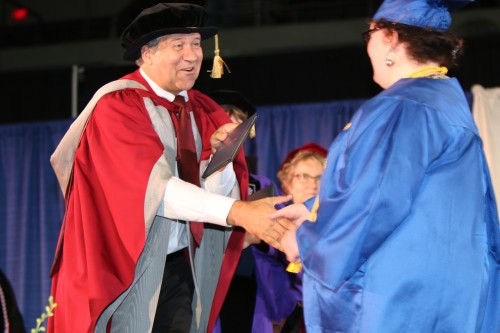 PCC President Jeremy Brown hands out diplomas on stage at the Memorial Coliseum during the college’s commencement in June.

The move up in degree completion rankings for PCC is part of the college’s effort to meet goals set by of Oregon’s emphasis on completion and measuring community colleges. It is tied to the state’s “40-40-20” initiative (40 percent of the state’s adults have four-year college degrees, 40 percent have two-year degrees, and the remaining 20 percent have high school diplomas by 2025). The bottom line is that the state’s community colleges must make sure students achieve their goals, by way of earning a certificate, career pathway, associate’s degree, or transitioning from developmental education to college level courses.

The reason for the improvement in national ranking had to do with PCC sustaining an enrollment surge due to the recession and having success in retention during that time. In addition, dual enrollment pacts with Portland State University, Oregon State University, Oregon Institute of Technology, Concordia University, Western Governors University, Marylhurst University and Linfield College also helped. In fall of 2012, PCC began automatic awarding of degrees where the college would automatically award degrees when students had enough credits and waived the fee associated with the old process. And, improvement in students’ financial literacy and the deletion for non-payment initiative helped move them along to their goals (having a payment plan, having a financial aid award, having their books…etc).

“This (change in) ranking demonstrates the dedicated work that has taken place over the past year at every level of the institution,” said Chris Chairsell, Vice President of Academic & Student Affair. “PCC faculty and staff are courageous in confronting the data and systematically implementing the best practices that will result in student retention and completion.”

Below are the current rankings where PCC made the top-100 in associate’s degrees awarded to certain groups and areas among community colleges, compared to its ranking the previous year (2011-12):

This is the second time in a month PCC has been noted nationally for its work. In July, President Barack Obama and Vice President Joe Biden signed H.R. 803, the Workforce Innovation and Opportunity Act (WIOA), and named Portland Community College’s Career Pathways Program as one of 30 examples nationwide that are making a difference in job training.

x by Huyen dap 8 years ago

PCC is a community college for my future. Thank you PCC that give me a opportunity to go back College and get a good career in future

x by Feature: Bold strategic visioning effort to map out next five years at PCC | PCC News 8 years ago

[…] nation among community colleges. According to a list compiled by the U.S. Department of Education, PCC ranked fifth in awarding associate’s degrees for the 2012-13 academic year. In total, the college awarded more […]