This content was published: May 4, 2012. Phone numbers, email addresses, and other information may have changed.

This year, Portland Community College turned 50 years old. From campus kickoffs to Diamond Alums to an ongoing exhibit at The Oregon Historical Society to 50,000 hours of volunteer service, PCC has celebrated, and continues to celebrate, in style. 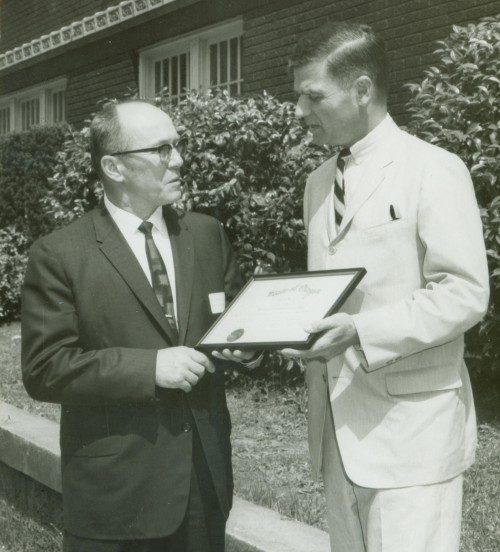 When Oregon’s Legislature approved the formation of community colleges in 1961, the Portland Public Schools launched Portland Community College. But it took a dedicated group of education pioneers to make it happen. The week of May 14-19 is all about them.

The college will celebrate the founding of PCC with Founders’ Week with daily events aimed at celebrating PCC’s role in the community and telling its stories. All week there will be trivia contests and historic displays, and PCC’s exhibit, “PCC: 50 Years of Education Revolution” will still be going on at the Oregon Historical Society (1200 S.W. Park Ave.). Admission to the museum is free for PCC students, staff, retirees and alumni all week long.

The following is a schedule of planned events. The entire PCC community is invited to attend.

Start Founders’ Week off right with a trip to the PCC Bookstore – select “PCC Spirit Gear” and get 50-percent off all week! Plus, look around campus for free 50th anniversary buttons, pens and decals.

Visit tables at each campus from 11 a.m. to 2 p.m. to report any volunteering you have contributed throughout the year – it all helps the college exceed its goal of 50,000 hours of community service in honor of the 50th Anniversary! In addition, while you’re there support the Children’s Book Bank by donating gently-used or new children’s books. Tables will be located at Building 3 Mall (Rock Creek); Student Center (Cascade); Mt. Tabor Great Hall (Southeast Center); and Lower CC Mall (Sylvania).

PCC Reads presents national best-selling author and PCC Alum Rebecca Skloot as she returns to PCC to discuss her acclaimed book, “The Immortal Life of Henrietta Lacks.” Rebecca first learned about Henrietta Lacks in a PCC biology class. She will speak at two events: 10–11 a.m. at the Event Center, Building 9, Rock Creek Campus and 6-7 p.m. at the Slavic Church Emmanuel, adjacent to the SE Center (2025 SE 82nd Ave., Portland). Transportation will be provided to the evening event from Cascade and Sylvania’s shuttle stops. At Sylvania, the shuttles will leave at 4:30 p.m. Two 60-seat buses will be available. The Cascade shuttle will leave at 5 p.m. and return after the talk.  It requires a reservation by emailing jzunkel@pcc.edu (limited space, first come, first served).

Join District President Preston Pulliams in welcoming back five of PCC’s past presidents at the Presidents’ Picnic! All students, staff, retirees and alumni are invited to a BBQ lunch outside Rock Creek’s Building 9’s Event Center, for 1961 prices, from noon to 2 p.m. Hear from past presidents tell how PCC has grown and changed, enjoy live music and view the dedication of the PCC Unity Project – four large-scale sculptures commissioned for the college’s anniversary, to be given to each PCC campus.  Pre-registration is required.

The PCC Foundation invites you to a 1961-themed benefit gala event featuring dinner, silent auction, and live entertainment. Tickets are $125 per person, and proceeds support scholarships and programs that foster PCC student success. Register to reserve your seat to this event now.

Read the “The PCC History Series.”