This content was published: May 1, 2012. Phone numbers, email addresses, and other information may have changed.

Southeast Campus: 30 years in the making

From the very start of PCC in 1961, DeBernardis (“Dr. De”) envisioned that there would be a major campus in the southeast Portland area, just as the college would have full-service campuses in the southwest, northwest and north areas of town. During the past five decades, the college grew fast and opened strategically placed campuses to serve this growth and to open doors of education to new populations. 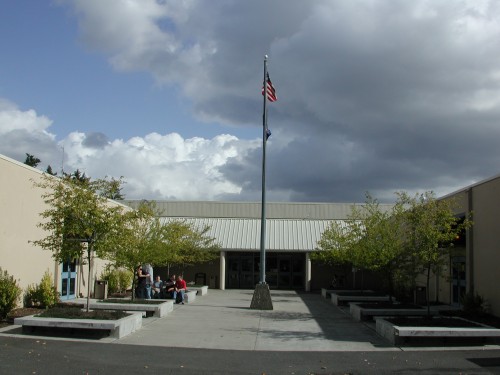 In the 1970s, PCC had orchestrated much of its southeast area instruction in rented classrooms at the old St. Anthony School near Southeast 78th Avenue and Powell Boulevard. In 1978, PCC purchased the U.S. Corps of Engineers Building on Southeast 82nd Avenue for $1.5 million and began remodeling it into a major educational center called the Southeast Center.

It would be the beginning of Dr.De’s vision for Southeast Portland. Eight acres of property came with the 86,000-square-foot building and DeBerbardis estimated at that time that the college would need 3-5 years for the building to be brought into complete operation. When finished in 1981, PCC began offering fire science, basic education, business, a few apprenticeship programs, drafting, small engine repair, art, law enforcement, supervisory development, electronic services, vocational classes for high school students, college transfer courses, counseling and community service offerings.

Through the years the Southeast Center trained thousands of employees for business and technology firms, including Walker Siltronic Corporation, a German firm located in Portland. In the late 1980s, the center was the focal point for computer and technology courses for PCC.

The reason the Southeast Center never became the Southeast Campus like its brethren at Rock Creek, Cascade and Sylvania, was somewhat due to the retirement of Dr. De in 1979. 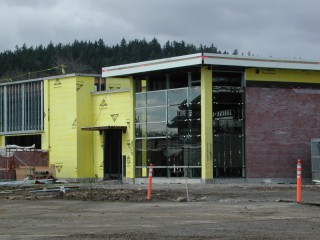 PCC bought a new location just down the street on 82nd Avenue and Division Street as part of the passage of the $144 bond measure in 2000 to address the enrollment growth at the center.

Through the Jim Van Dyke and Dan Moriarty years, it was the status quo for the Southeast Center. Toward the end of Moriarty’s tenure in 2001, PCC bought a new location just down the street on 82nd Avenue and Division Street as part of the passage of the $144 million bond measure in 2000 to address the enrollment growth at the center.

But the Southeast Center always remained short of being called a “campus.” Opened in 2004, the new 94,000-square-foot center allowed students to complete the first year of a college transfer degree at the site, not a sure thing at the old location. On top of transfer courses, Southeast now offered art, history and writing to math, business administration, economics and general science classes as well as Computer Applications and Office Systems, Management and Supervisory Development, and Industrial Occupations (trades). The new center houses the college’s alternative high school program, Gateway to College as well as English as a second language.

The multi-building location offered a dance studio, fitness center, ceramics and painting studios and a photography darkroom. The headquarters for PCC’s Extended Learning Campus, which offers a wide array of workforce training, adult basic education, personal interest and continuing education programs for PCC, was moved to this site.

“To have a community focus with this center will benefit all of us,” said Paul Ellison, who was at the time president of the 82nd Avenue Business Association. “The education center will help attract students and improve the economic diversity in the area. It’s nice to have something of this caliber next door. PCC will be a good neighbor.”

Since its grandopening, the Southeast Center has experienced the most rapid enrollment growth of any PCC location. 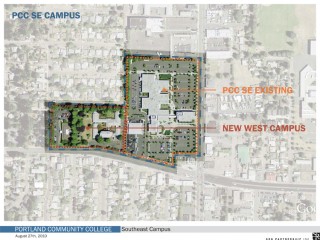 After voters approved PCC’s $374 million bond measure in 2008, PCC bought a restaurant, a Kaiser Permanente clinic and the German American Society of Portland building adjacent to the center as part of expansion plans.

In data released by PCC’s Office of Institutional Effectiveness for the last three years, the center has grown to 6,175 credit students in 2011, up from 4,705 in 2008 – an increase of 31 percent, but the number of class sections has risen by one third.

“And in that same time frame we went from 7,200 advising visits to 13,038,” said Luis Rodriguez-Garcia, the academic advising coordinator for the Southeast Center. “That is an increase of 81 percent. Because of this surge there was a two-hour wait to see an advisor.”

Rodriquez and his office manage this increase with one coordinator, two full-time advisors and one assistant for the center’s START Lab – a resource center enabling new students to drop in and complete their orientation, first advising session and registration in a group-like setting.

“When it comes to scheduling, we try to get students to take most of their classes at the Southeast Center, but most of the required classes fill up quickly,” Rodriguez said. “Space is limited, so we encourage them to take that next step and ride the free PCC Shuttle to other campuses.”

It has been clear for quite awhile that DeBernardis’ initial vision of a comprehensive campus in Southeast Portland was wanted and needed. After voters approved PCC’s $374 million bond measure in 2008, PCC bought a restaurant, a Kaiser Permanente clinic and the German American Society of Portland building adjacent to the center.

Construction crews are expected to begin work this fall on a $39 million expansion where the Southeast Center will become a comprehensive campus by adding classrooms, science labs, a full service bookstore, a learning center/library, food service facilities, commercial storefronts, green space for public gatherings and a child development center. When work is completed, students can earn academic credentials without having to leave the center for another PCC campus.

In the end, the new Southeast Campus will accommodate more than 20,000 students annually, up from nearly 11,000 now.

“Our Southeast Portland community will be better served as a result of the expansion of the center into a comprehensive community college campus,” said Craig Kolins, Extended Learning Campus president.

Read the other installments in “The PCC History Series.”

Portland Community College is doing a good job, putting the student comfort at heart for effective academic performance. Statistic show the institutions determination to providing comfortable learning environment for its student. I am glad to be a student of this amazing institution which is raising above it circumstance and leading the path way for others to follow. Keep the good job on am proud of you.

[…] makes sense. Thanks to the 2008 $374 million bond measure, the Southeast Center will expand and become a full comprehensive campus to serve this same community. Construction crews are expected to begin work this fall on a $39 […]

x by Feature: Founders’ Week: PCC welcomes back its past presidents | PCC News 1 decade ago

[…] to the 2008 $374 million bond measure, the Southeast Center will expand and become a full comprehensive campus to serve this same community. More than 80 PCC students, faculty and staff marched in the parade, […]