This content was published: December 12, 2011. Phone numbers, email addresses, and other information may have changed.

History Series Part 2: The Battle for the Rock Creek Campus

In 1969, the vision for what is now the Rock Creek Campus officially began. It also started what would become one of the college’s fiercest fights that still has those who remember “The Battle for Rock Creek” chatting in hush tones and looking over their shoulder. The mere mention of it causes one current Oregon Congressman to shake his head. 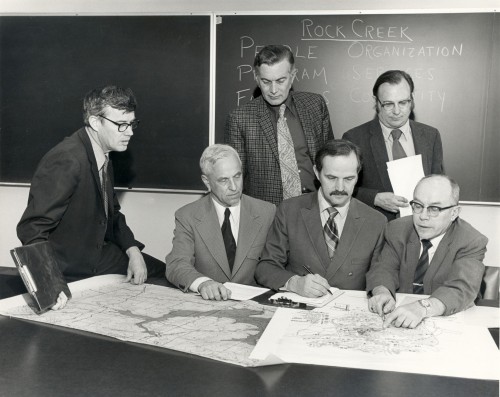 Dr. Amo DeBernardis (first row, far right) was passionate about establishing a campus in Washington County and made it happen despite political opposition.

That year the Washington County Planning Commission and its chief planner okayed PCC to go ahead with plans in developing a comprehensive campus near the Rock Creek Reservoir, 10 miles north of Beaverton. The idea was that a new PCC campus would help lure more development to rural Washington County.

Not so fast, Portland Community College

But before PCC could start the campus, the commission changed its mind and announced they weren’t going to give the college permission to build the Rock Creek Campus. The problem? They feared overcrowding. That’s not something you want to hear after plunking down $584,955 to buy the land.

“We asked them what about the 250 acres we had bought on their recommendation,” recalled the late Roy Lindsay. “They said: ‘That’s your problem.’ And then the whole thing developed into a real dog fight.”

Founding president Dr. Amo DeBernardis’ vision, one he was most passionate about, was in jeopardy. DeBernardis would go on to spar with the Washington County Planning Commission, Department of Environmental Quality, Columbia Region Association of Governments, Portland Area Metropolitan Boundary Commission, and conservation groups. 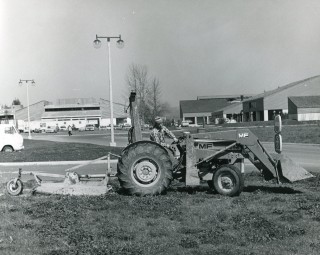 Grounds crew tend to the new Rock Creek Campus landscape on a sunny day in the late 1970s.

Oddly, these battles included the likes of State Legislator Vera Katz (future PCC Director of Public Affairs), college faculty and even his own board member – Earl Blumenauer (the Oregon Congressman), who was elected to the PCC Board on the platform of stopping a Rock Creek Campus.

This war of wills featured PCC pouring fresh concrete on a Rock Creek building one day before the use permit expired in 1974 and many subsequent battles in the Legislature punctuated by DeBernardis storming out of a Ways and Means Committee hearing when Katz threatened to block its funding of $2 million, yelling, “We’re going to build Rock Creek anyway!” Despite this, thanks to DeBernardis’ determination, the committee voted to fund the campus construction.

But roadblocks still lay ahead. Conservation groups opposed the campus because it was in a timber conservation zone and no utility services could be brought to the campus not to mention that the 250 acres were prime farm land. PCC’s own instructors were against it because they felt the college was expanding too quickly and that building commitments to the Cascade Center hadn’t been met. The DEQ disapproved of PCC’s plan to construct an interim sewage treatment plant so only pure water would be dumped in the Rock Creek basin. Even the college’s alternative pressurized sewer system plan to connect to Somerset West was rejected by the Unified Sewerage Agency, which preferred a gravity sewer line.

When the college got approval for its sewer system, the Columbia Region Association of Governments declared Rock Creek didn’t conform to their policies. Another commission didn’t like PCC’s annexation to the Wolf Creek Highway Water District. And on and on. By the summer of 1974, PCC had gotten all the approvals to finally build the campus, but it was just two months before the college’s conditional use permit for the land expired. If PCC didn’t get some sort of construction going by the end of that permit, it would have to get approval from all of those organizations again. 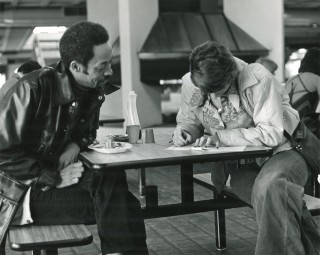 Back in the day, students could study next to the fireplace in the Building 2 mall.

Despite an injunction by the Oregon Environmental Council to prohibit a building permit, on Sept. 27, 1974, concrete footings for the campus’ toilet tower were poured just a day before the land use permit expired.

“It was the first time I ever heard of anyone building a toilet and then building a campus around it,” said Walt Allen, a longtime superintendent of maintenance and supervisor of construction for PCC in the 1970s. “But to get under the conditional use permit wire that’s the way we had to do it – and that’s the way we did it.”

‘The Promise’ driving force in ‘The Battle’

Why was De Bernardis so adament to fight politicians, public agencies and even his own staff to get Rock Creek built? It stemmed from a promise he made to Washington County in the 1960s. During that time counties around Portland were trying to determine who should have their own community college. All of them wanted their own with no ties to anything “Portland.” To ensure PCC’s growth and inclusion in the metropolitan area, DeBernardis promised Washington County reps that if they joined PCC, their county would have their own major campus after Sylvania was built. He argued that it would be far cheaper to residents if they were part of the college’s system.

“Rock Creek was a real long shot,” said PCC instructor and state legislator Michael Dembrow. “Back in the 1960s it was a dream for PCC’s founding president, Dr. Amo DeBernardis. He wanted to build a campus out here and people thought he was crazy. Why do you want to build a campus out in a middle of a field when the industry is in Portland and everyone lives in Portland and he said, ‘First of all, land is cheap.’ Also he had a vision there in the 1960s that Washington County was going to be a very different place in the future and it was going to be an economic engine and a place where a lot of people would move to and all of those people were going to need education.” 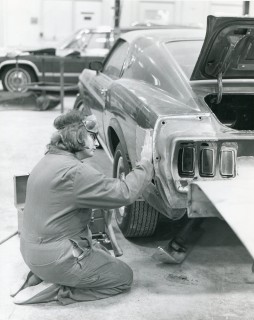 Auto Body Repair is a longstanding program at Rock Creek, with numerous ties to businesses in Washington County.

Dr. De was right. By April of 1976, the Battle for Rock Creek had been won. With the first phase of the campus completed, more than 600 students were taking classes on a campus with a capacity to serve 2,500. The $14 million phase two began that summer to add food services, art, drama, landscaping, music, photography, agriculture and general education classroom space.

Ever since the Rock Creek Campus started in 1976-77, thanks to the determination and grit of DeBernardis, the campus has grown rapidly to serving 25,800 students today, making it the fastest growing PCC campus. Today it’s surrounded by growing housing communities, schools and infrastructure. DeBernardis was adamant about extending that opportunity to residents of Washington County when he went against the conventional wisdom at the time in the well-known “Battle for Rock Creek.”

“The basis for our innovation, the ability to be creative, is when Rock Creek was started 35 years ago with the vision of our founding president Dr. DeBernardis who pushed, and cajoled and worked to have a campus here,” said PCC District President Preston Pulliams. “And he had a lot of detractors about that vision who pushed back and said, ‘Now wait a minute there is nothing there. Nothing is going on. Why should we invest college money or public dollars to come out here?’ That value and vision of creativity and being out and accessible and being innovative remains one of our key values.”

To read Part One of our History Series, visit “PCC’s origins started with a Failing school.”

x by Southeast Campus: 30 years in the making | PCC News 1 decade ago