This content was published: October 17, 2011. Phone numbers, email addresses, and other information may have changed.

“For the first two years we operated with part-time day faculty members because we couldn’t afford full-time faculty members,” said Bryce Hanning, a supervisor for the school district’s adult and vocational education program in the early 1960s. “We used the high schools after 4:30 p.m., and often students had to drive clear across town to get to their next classes.”

The school was closed down and the building abandoned. Located at 049 Southwest Porter Street near the west end of the Ross Island Bridge, it was a central location for the fast-growing community college. Despite the poor name for an education building, Failing provided PCC with 22 classrooms at a single location and a place for its new headquarters, which had been in an old portable building behind Benson High School. 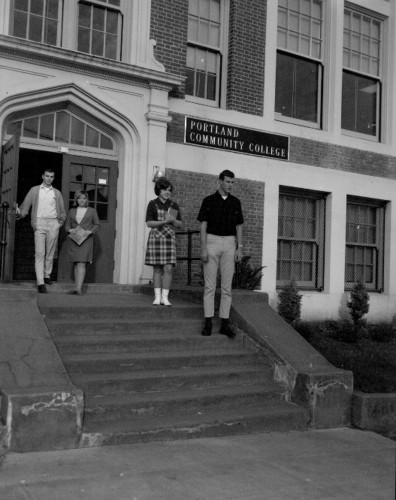 Circa 1962. The old Failing Elementary School opens for business. When staff started the move to the new location, they realized Failing had a leaky roof, poor lighting, irregular heating and power, little furniture for staff and needed a cleaning. But by Monday morning, PCC had three study programs up and running.

“The real beginning of moving into a community college type of operation came when we moved into the Failing School building,” Hanning recalled.

At this time, a do-it-all assistant superintendent for buildings and budget with Portland Public Schools had been given extra duties of overseeing the adult and vocational education program in addition to other duties. Despite being overworked, Dr. Amo DeBernardis knew the move to Failing would be best for students and put up the idea of forming the community college to a vote by the then small group of directors by secret ballot – it passed by one vote.

“And I remember that we got approval to move into Failing on a Thursday and were scheduled to begin classes there the following Monday,” Hanning said.

When staff started the move of out-of-date desks, chairs and equipment from

PPS’s Guilds Lake storage unit to the new location, they realized Failing had a leaky roof, poor lighting, irregular heating and power, little furniture for staff and needed a cleaning. But by Monday morning, PCC had three study programs up and running.

“At Failing in those days it was a brown baggers’ paradise,” Hanning recalled. “Our service budget allowed us to have a coffee machine, a candy machine, and I believe we had a cigarette machine which we had hidden out. Smoking in the schools was starting to become taboo about that time.”

But there were growing pains. By fall of 1964, Failing had 844 students and by the fall of 1965 enrollment grew to 1,100. Phone operators managed an antiquated switchboard, deans, secretaries, faculty and counselors all were wedged into Failing’s main hall. Dr. DeBernardis’ office was a closet-like hole, which used to be a restroom off a hallway. Because it had been a building for elementary students, bathroom stalls were very short and not very private. Locations of restrooms caused switchboard operators – all female – to duck into the nearest convenient one, which was the men’s lounge. The mailroom was a closet under the stairwell.

“But we overlooked a lot of negatives because we functioned like one big family, and there was a strong feeling of camaraderie at Failing,” said Venola Kohl, a secretary and switchboard operator then.

The audiovisual program grew fast, even offering audiovisual training for Alaskan Eskimos, who would return to their frozen villages to teach others what they learned. Even though it was successful, audiovisual’s Failing quarters were not ideal. 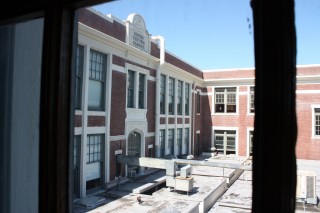 The Failing school facility still looks like it did 50 years ago and is still used for education – by the National College for Natural Medicine.

“It was a single room with only three light bulbs and two power outlets,” said Walt Munhall, head of PCC’s audio visual aids program at the time. “Later we moved to part of an outdoor playcourt which had been sealed in and turned into rooms. When we had occasion to show instructional films, we did it out in a hall.”

Many of the staff and faculty wondered if there wasn’t a better name for the building, but when told of its history, no other name seemed appropriate. Josiah Failing, often cited as the father of Portland schools, came to Portland from New York in 1851. He immediately spearheaded efforts to form a school district that same year. Failing became an important man in Portland – attending the Republican National Convention that nominated Abraham Lincoln and leading a drive to establish the first tax-supported public high school in 1880.

But in following years of Failing’s acquisition, the PCC Board of Directors grew tired of the chuckles at Failing’s name and officially changed it to the Ross Island Center, which still stands today. Through the years, as PCC expanded, the Ross Island Center became the hub for personnel, Open Campus and business operations of PCC – the heart of a fast growing community college up until 1995 when PCC sold it to the National College for Natural Medicine.

In a way, it was a perfect way to honor the man known as the founding father of education in Portland, who happened to have the imperfect name for education.

x by Southeast Campus: 30 years in the making | PCC News 1 decade ago