This content was published: February 20, 2012. Phone numbers, email addresses, and other information may have changed.

In comparison to PCC’s well-documented “Battle for Rock Creek,” the development of the Cascade Campus was a breeze with the minor exception of a passionate retired couple. 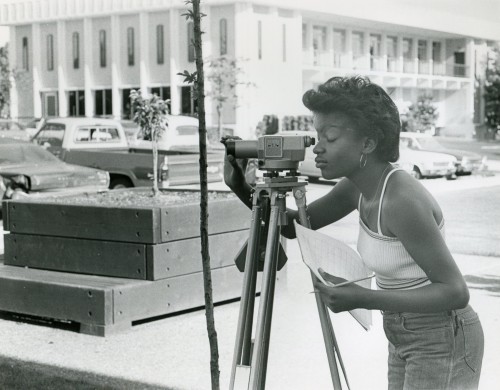 Thanks to the new Cascade Center, future education and career opportunites for North Portland students were right in their sights.

When PCC bought the land to develop the new Cascade Center, it had to tear down a few homes. But the college agreed to leave one untouched – the house of Olga and Irvin Walters. In their 70s and children long moved out, they had lived most of their lives in this house.

“We worked so hard on this house to make it a comfortable home that we just can’t think of moving,” Olga told PCC’s land acquisition team in 1971. “That little kitchen is where the five us used to eat.”

The Walters sold their house to the college for $9,600, but with a provision they could live out their remaining days there rent free, pay no property taxes and PCC would maintain the home. Campus landscapers tended to their garden as the home remained an oasis among parking lots and PCC buildings.

Before it opened as the Cascade Center, not all plans went as smoothly as the deal the college brokered with the Walters. According to PCC’s founders, too many people and too many organizations had a piece of the action when the college tried to acquire property and buildings of the old Cascade College. This college had started out as a bible school in 1918, grew to become a four-year liberal arts college, before collapsing under debt in 1969 after expanding to accommodate its enrollment growth. But in ’69, enrollment began to decline and costs rose and soon the bankrupt Cascade College had to close its doors.

Liens against the buildings associated with the Cascade College were an obstacle as the mortgages for the lands were held by private financiers. Competition from the Model Cities Commission, a federally funded organization that tried to regenerate neighborhoods in the 1960s and 70s, also eyed the area as an education and community center to anchor and upgrade North Portland. PCC officials eventually acquired the Cascade properties after flying to Washington D.C., to get Oregon Senator Bob Packwood to lean on the Housing and Urban Development Commission. It worked. HUD and the City of Portland acquired the suspect mortgages and gave PCC an interest free loan to buy the Cascade Student Union Building outright, repaying HUD $90,000 a year for the next five years. It was also agreed that PCC could occupy the entire Cascade property if it worked with Model Cities to provide three-years worth of educational programs to its residents.

In the fall of 1970, the Cascade Center opened with 400 students. Most of them were transferred from the Sylvania and Shattuck campuses to relieve overcrowding at those sites. Cascade was much more than a branch campus of PCC; it opened with the intent as a multipurpose operation of providing education opportunities to North Portland residents. 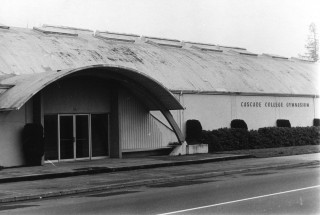 This building became the gymnasium for the Cascade Campus for many years until a 2001 bond measure gave the college a brand new facility across North Killingsworth Street.

Even though it wasn’t entirely PCC’s, the Cascade Center became a model of partnering with area organizations, from Portland Public Schools to Portland State University’s School of Social Work to the YMCA and Girls Scouts, to name a few. They all came together to provide cultural enrichment, adult education, career selection and training, community activities and extensive job entry training at the center.

By 1971, Cascade had 800 students and by 1974 it grew to 2,240.  One of its services was literacy tutoring for the large number of Cambodian and Vietnamese refugees that came to Portland after being displaced by war. Today, the center is now called the Cascade Campus and serves more than 21,000 students annually.

“I think Cascade has brought a pride to the community here and by being a member of the community I can appreciate this,” said retired Cascade Librarian Yvonne Williams in the mid-1970s.

A luminous career is born in North Portland

Cascade wasn’t only a place of opportunity for students of North Portland, but also staff and one particular future state senator. Margaret Carter began as a PCC counselor at Cascade in the 1970s. During her stint at Cascade, Carter’s time was divided between outreach program, transfer and international students. During the gas shortage crisis of the mid-1970s, she would drive to students’ homes to counsel them on their academics or would drive welfare recipients to their classes at the campus. 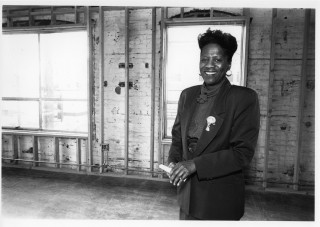 Sen. Margaret Carter began her career as a counselor at the Cascade Center, even driving to students' homes so they wouldn't miss out on needed guidance.

Carter is one of the few people who have seen the college grow through its five decades of existence. As she became a successful counselor and instructor with the college, her burgeoning stature in the community led the Louisiana native to seek public office. She ran successfully for the Oregon House of Representatives in 1984, becoming the first African-American woman to be elected to the Oregon Legislature. She followed this with a successful bid for the state Senate in 2000, where she eventually served as President Pro Tempore and co-chair of the Joint Ways & Means Committee and co-chair of the Joint Ways & Means Committee. She capped her public career as Deputy Director for Human Services Programs at the Oregon Department of Human Services.

As a result of this career, Sen. Carter was honored last fall at the Cascade Campus with a ceremony and building dedication.

A move is narrowly avoided

In 1982, PCC flirted with moving the Cascade Campus to the old Adams High School building that would provide the college with 250,000-square-feet of usable space and vocational shop areas compared to Cascade’s 110,000. But community members and staff as well as students opposed the move because Cascade had become a vital part of the community for education, recreation and a center of community activities.

And for the Walters, their home oasis would soon make room for additional parking to serve the growing student population. Irvin died in 1977 and Olga continued to live in the home until 1986 when she was in her 90s. “All the automobiles never bothered us, and I don’t think our home was very much in the way,” she said.

To read part two of our history series, visit “The Battle for the Rock Creek Campus.”

Or, to read part one, visit “PCC’s origins started with a Failing school.”

x by Southeast Campus: 30 years in the making | PCC News 9 years ago

x by Feature: Founders’ Week: PCC welcomes back its past presidents | PCC News 8 years ago