This content was published: October 24, 2011. Phone numbers, email addresses, and other information may have changed.

In front of a hushed crowd at Portland Community College’s Moriarty Auditorium on the Cascade Campus, Oregon Historical Society Director Kerry Tymchuk pulled out a small bell and rang it into the podium’s microphone.

And remembering as well as modifying, a famous line from the classic film, “It’s a Wonderful Life,” Tymchuk put the bell down and spoke into the mic.

“Every time a bell rings, an angel gets a building named after her,” Tymchuk said to applause. 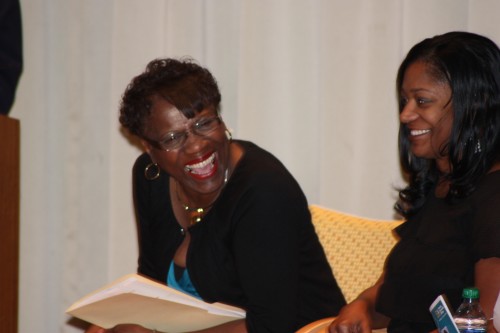 On Friday, Oct. 22, PCC christened the newly-named Senator Margaret Carter Technology Education Building at the Cascade Campus (705 N. Killingsworth St.) in front of more than 200 friends, family and community members. In addition, the event served as the campus kickoff for PCC’s 50th anniversary and celebration of its five decades of giving students opportunity at education, now, then and always.

All year long, in honor of PCC’s 50th anniversary, the college has pledged to donate 50,000 hours of service to the community. PCC will partner with local community service efforts throughout the year to achieve its 50,000-hour goal. The college is also launching the PCC Diamond Alum Awards where it is searching for 50 alums who shine by making positive impacts on their community and others. For nomination details, visit PCC’s Opportunity webpage.

Sen. Carter’s personal and professional association with the college covers five decades, when she began taking classes at the Cascade Campus to support her baccalaureate studies.

“Today marks an honor and milestone in my life,” said Sen. Carter. “For without the support, the motivation, the strength and the intestinal fortitude given to me by all of you I would not be standing here today and please know that. Allow me to say to all of you, give yourselves a hand because it is not only for me, but for you that we do what we do today.”

“Both the college and Sen. Carter are true beacons of achievement for our state,” said Gov. Kitzhaber. “This institution really has allowed thousands and thousands of people to get good family wage jobs, which of course has made our community even stronger. And as we work to rebuild Oregon’s economy clearly we need to create even more family wage jobs and spur innovation and I have no doubt whatsoever that Portland Community College, with its 93,000 students and its connections and partnerships with business and industries like Intel, will definitely be a part of the solution. Today, this institution changes peoples lives and opens the doors of opportunity and that’s what Sen. Carter has done throughout her entire political career.” 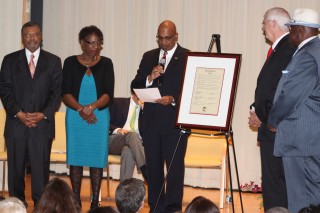 Sen. Carter is one of the few people who have seen the college grow through its five decades of existence. As she became a successful counselor and instructor with the college, her burgeoning stature in the community led the Louisiana native to seek public office. She ran successfully for the Oregon House of Representatives in 1984, becoming the first African American woman to be elected to the Oregon Legislature. She followed this with a successful bid for the state Senate in 2000, where she eventually served as President Pro Tempore and co-chair of the Joint Ways & Means Committee and co-chair of the Joint Ways & Means Committee. She capped her public career as Deputy Director for Human Services Programs at the Oregon Department of Human Services.

“It is truly fitting that we’re having this remarkable gathering today in recognition of Margaret while we’re pondering a half century of commitment to this community for Portland Community College,” said U.S. Rep. Blumenauer. “(PCC is) truly a beacon of action, not just in Oregon, but nationally for making a difference for a community. Margaret has a commitment to community, commitment to the college. She has had so many roles. This woman has had more hats than Imelda Marcos had shoes, but they were all focused on the community, on the future and for people who needed the help the most.”

The bell-ringing Tymchuk, who was branded as Sen. Carter’s favorite Republican, served as a top aide and advisor to Elizabeth Dole, Bob Dole and Gordon Smith. But most importantly, he’s also president of Sen. Carter’s fan club. 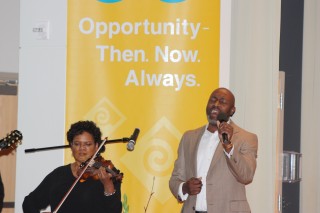 Michael Adams, a PCC Foundation recipient, sings for Sen. Carter and the crowd of 200-plus.

While in Salem, Sen. Carter continued as a vocal advocate for higher education in general, and for community colleges and PCC in particular. In 1989, she was instrumental in establishing the Cascade Campus Skill Center, which was renamed in her honor in 2007.

“She spent the past four decades making the impossible seem routine,” added President Gatewood. “Sen. Carter has been a part of the campus’ history since the beginning. We opened our doors about 40 years ago and she began her educational career in the spring of 1973. Sen. Carter has been an unwavering supporter of education in this community, throughout Portland and the state of Oregon. During her work in the Legislature she tirelessly advocated for funding so we would have the resources to give our people the opportunity to better themselves.”

Sen. Carter’s commitment still shines bright and the love people feel for her in the community showed up when she took the stage. A couple years ago, she established a $25,000 endowed scholarship at the PCC Foundation and is within $1,500 of endowing the scholarship fund. So when told of this, people in the audience started standing up to pledge hundreds of dollars each so that she could have her scholarship.

“My grandmother has always demanded excellence in education and she would not accept any excuses, not even to this day,” said Phillips. “She believes in, and instilled the belief in all of us, that education is the key to economic and social success in America.”