This content was published: April 5, 2012. Phone numbers, email addresses, and other information may have changed.

It was 1966 and enrollment stood at a whopping 9,710 students. Shattuck Hall near Portland State University and Failing Elementary School (later named Ross Island Center) were crammed with so many bodies that people sensed there would be a breaking point. The college had built a wide assortment of temporary buildings in the parking lots to help deal with the overcrowding at PCC. But the cries for more breathing room were growing louder. 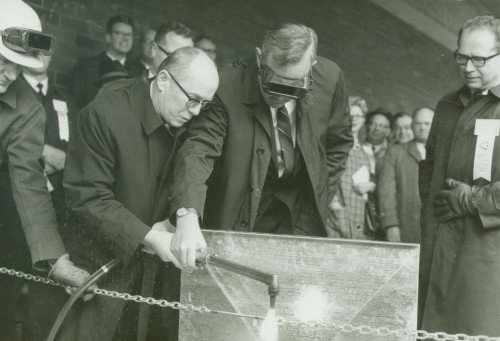 PCC broke ground at Mt. Sylvania on July 6, 1966, but the three buildings that were planned in the first phase wouldn’t be ready until 1968. But the fact that relief wouldn’t come for more than two more years was the least of the college’s problems, according to one manager quoted in the book “They Just Did It,” about PCC’s history.

“I remember the first time they showed me the site where they planned to build the Mt. Sylvania Campus,” said Walt Allen, longtime construction and plant superintendent. “I said ‘You’re crazy – that’s a woods with a steep slope – you can’t build buildings there.’ The place seemed like the end of the world at the end of a cow trail. There was nothing around, except for trees, rocks and sloping mountains.

A fiery start to Sylvania’s construction

“De” was founding president Amo DeBernardis. By late 1967, his community college was occupying the Shattuck and Failing locations plus portable buildings at both locations, the Lifetime Building on Southeast Powell Boulevard, the Beech Center at 22 North Beech Street and a building behind Benson High School. In addition, PCC instructors were teaching classes at Washington High School a few nights a week. So, yeah, a big campus was needed. 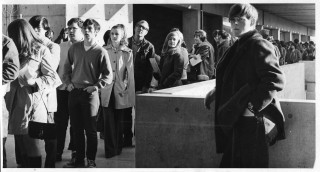 Long lines for class registration were the norm when the Mt. Sylvania Campus first opened.

On Jan. 10, 1968, PCC opened the first phase of the Mt. Sylvania Campus with an acetylene-torch-cutting-a-chain ceremony performed by Dr. De and then Oregon Governor Tom McCall. The phase included three buildings that housed a heating plant, auto body space, welding and machine shop classes, science and drafting classrooms, and classrooms for social science, business and liberal arts courses. And, amongst it all, was a small little side room that served as the president’s office. In total, Mt. Sylvania was a monument to what PCC could be and where it could take students.

“The community college movement is the most volatile thing that has happened to education,” McCall said at the campus opening.

PCC built it and the students came

But there were worries. At a cost of $20 million, PCC planned to construct nine buildings to accommodate 5,100 student seats and create parking for 3,000 cars. The question was, “Would anyone come down from Portland to attend classes at Sylvania?” Staff and faculty wondered this and even both major newspapers in Portland at the time wrote critical editorials about the plan.

In March, with spring term registration set to begin, assistant to the president Roy Lindsay arrived to Sylvania at 7:30 a.m. What he saw laid to rest any questions about whether the community would embrace Sylvania as student car traffic backed up on Southwest 49th Avenue down the hill to the freeway and Barbur Boulevard.

“And by ten o’clock that morning the governor couldn’t have found a parking place on the campus,” Lindsay remembered. “Every possible parking spot was taken, and you couldn’t have squeezed in even a toy automobile.”

What was life like at the Sylvania Campus in the early days? There was no cafeteria except for a small fry station in the lower mall of one building and hot food was prepared each morning at Shattuck Hall and trucked over to Sylvania. The library was essentially a converted classroom and the bookstore lived in the auto body shop.

Campus wasn’t a hit with students or faculty (at first)

Work on the student center, cafeteria and library was ongoing with an aim to come on line in 1970. In addition, the third phase included the health technology and communications buildings, which were to be completed in 1972. 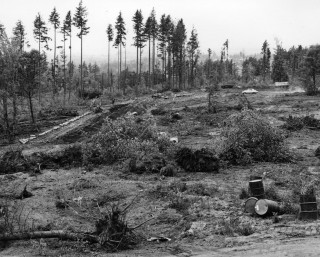 As one PCC manager said, the Sylvania Campus location, "seemed like the end of the world at the end of a cow trail."

All this construction work made it a muddy and sometimes hectic place for students.

“When it rained, I can remember walking through the muddy outside areas of the Sylvania Campus with my boots on because there were no concrete sidewalks,” said Ken Berry, a PCC Diamond Alum who worked at KGW Radio as a disc jockey in the 1960s while taking classes at Sylvania.

And the style of architecture didn’t necessarily go over well with students either. The student newspaper, The Bridge, cited clogged drains, cramped quarters, parking issues and drab surroundings as sources of contention for students. Faculty had their own complaints as construction work made teaching in classrooms difficult as noise and ground shaking made for an annoying orchestra of sound.

However, Sylvania’s brutalistic bunker architecture style, which featured lots of concrete slabs and open classrooms with generous amounts of windows on the outside and inside so visitors could see education in action, was making national news. The style was Dr. De’s shopping center approach to education and was reflected in buildings that were made with large, open areas, just like shopping centers and malls. Classrooms were built with windows facing the malls and hallways so people could see classes happening as they passed by.

Not everyone may have appreciated Mt. Sylvania in the early days, but it accomplished the vision that Dr. De wanted – an open and accessible facility for the public to use for its educational needs. Today, it serves almost 27,000 students annually.

“We teach what the people want to learn – as long as it’s legal,” said DeBernardis when the campus got under way. “If you want to study and learn more, find us 10 people who want to learn the same thing and we’ll find you a teacher and a classroom to learn in.”

Read the other installments in “The PCC History Series.”

x by Southeast Campus: 30 years in the making | PCC News 9 years ago

x by Feature: Founders’ Week: PCC welcomes back its past presidents | PCC News 8 years ago