This content was published: February 23, 2010. Phone numbers, email addresses, and other information may have changed.

Dr. Amo DeBernardis, the founding president of Portland Community College, passed away Friday, Feb. 19. He was 96. An on-campus remembrance event has been planned.

DeBernardis, or “Dr. De” as he was known at the college, served as PCC’s president from 1961 up until 1979 when he retired. His strong vision helped establish PCC’s footprint that the community knows today. He spearheaded development of all the major comprehensive campuses (Sylvania, Rock Creek and Cascade) and devised its mission.

“He cared zero about the accouterments of the office, but cared everything about the mission,” said former PCC President Dan Moriarty. “His legacy lives on. I am honored to have worked at PCC and to have used his desk for fifteen years. For Amo the presidency was not just a job. He believed passionately in the mission and more specifically in the idea of educational opportunity for all the citizens of the community. Everything and everyone else came second.” 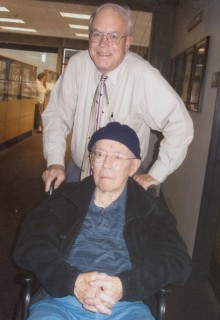 DeBernardis pioneered concepts that today are integral to PCC’s mission, such as fostering a robust open campus, cultivating business partnerships and designing curriculum aimed at giving students and employers what they want and not meet some academic agenda.

“When we started Portland Community College in 1961 the name of the game was ‘students come first and everything else about the college is supportive and secondary,’” wrote DeBernardis in the PCC historical book “They Just Did It.” “This perception of what a college should be should never change.”

In 1961, DeBernardis was named administrator of the newly founded Portland Community College while remaining assistant superintendent of Portland Public Schools. PCC had been the Vocational and Adult Education Division of PPS in the 1950s. In the early 1960s, the State Legislature approved a bill authorizing the formation of community colleges in Oregon.

It wasn’t easy establishing PCC then. Detractors kept advising him that a community college would never make it in Portland. The colorful DeBernardis was known for his passion for education and his ability to be blunt and forceful, and an administrator at the time said that if the college refused to be born naturally, DeBernardis would have taken a scalpel in hand and performed a caesarian to make it happen.

“I always felt he was one of the great people in the educational field there ever was,” said Glen Fors, department chair of many of PCC’s Vocational Programs from 1965-1988. “And, ultimately, you did things his way or they didn’t get done.”

PCC would soon have space in the 22-classroom building in the old Failing Elementary School, which would later be renamed the Ross Island Center. In a bold move that would come to symbolize his management style during his tenure, DeBernardis pulled up stakes from his own office at Portland Public Schools and moved to a room at the building. He had been warned it was a poor career move and that he was tying his future to a hopeless cause.

It was far from it. Today, PCC is the largest institution of higher learning in Oregon, serving approximately 87,200 full- and part-time students, and serves the geographic area the size of Rhode Island. It has three comprehensive campuses, five workforce training and education centers and 200 community locations. The college now is experiencing one of its most dramatic growth spurts in enrollment with 10 consecutive terms of increases. This winter term, PCC has grown by more than 22 percent in credit students compared to last year.

“I would like to add that for the most part and with few exceptions  Amo ‘bulled’ ahead on so many of his initiatives with little or no support from the established political system of any persuasion,” added Moriarty. “Indeed in several instances the system worked explicitly against him. Amo was a believer in the community college mission and that sustained and motivated him. And he believed in the people, the citizens of the community and they supported him. He got the job done.” 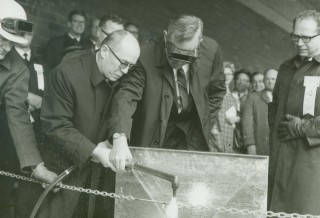 DeBernardis officially opens the Sylvania Campus in 1968 with a welder's torch.

That wasn’t the last time DeBernardis would assert his will on modeling PCC. The famous “Battle for Rock Creek” is stuff of legend in the college community and is probably the most public example of how determined DeBernardis could be. Starting in 1968 when he and his administrators began planning for a campus on the Westside, DeBernardis sparred with the Washington County Planning Commission, Department of Environmental Quality, Columbia Region Association of Governments, Portland Area Metropolitan Boundary Commission, conservation groups, State Legislator Vera Katz, college faculty and even his own board member – Earl Blumenauer, who was elected to the PCC Board on the platform of stopping a Rock Creek Campus.

This war of wills featured PCC pouring fresh concrete on a Rock Creek building one day before the use permit expired in 1974 and many subsequent battles in the Legislature punctuated by DeBernardis storming out of a Ways and Means Committee hearing when Katz threatened to block funding, yelling, “We’re going to build Rock Creek anyway!” Despite this, thanks to DeBernardis’ determination, the committee voted to fund the campus construction.

“People always ask me about him and I’ve always said Dr. DeBernardis had more ideas in five minutes than most men had in a lifetime,” said Roy Lindsay, who worked as DeBernardis’ assistant and vice president during his tenure. “I mean that in a positive way. His mind never stopped with what we were doing and looking ahead to what we should do be doing. He always asked, ‘What is in it for the students?’ There was not a matter that came up or proposals made where that question wasn’t asked.”

Even though his parents, who emigrated from Italy, had very little formal education (his dad was a third grade drop out) they instilled a strong commitment to education in the young Amo. “They saw a value in education and were determined that their children would have a basic education,” DeBernardis recalled.

His parents, Bert and Maddalena, also believed that idle hands can lead to trouble and thus enlisted Amo in the family’s small wicker furniture business. At home, he spoke very little English as Italian was the language of the household and when outside of the home, he tried to hide his Italian heritage and dared not speak the language to anybody. At the time, those of Italian heritage were targets of hate and DeBernardis had his fair share ethnic slurs hurled his way. 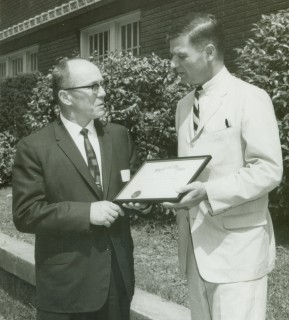 Even though he was known as being blunt, DeBernardis (left), seen here with a young Sen. Mark O. Hatfield, was also skilled at politics.

He enrolled in Kennedy Grade School in Northeast Portland and wasn’t the best student and often skipped classes. But it was the school’s principal who instilled the value of staying in class that sent DeBernardis on his way to an education.

“I’m sure that had it not been for our principal I would have never finished elementary school,” he said. “I would have probably have dropped out and gone another route.”

He gradually got hooked on school and would later attend Benson High (a vocational school) against his parents’ wishes, where he excelled at auto mechanics, math, English and blacksmithing. After an accident in the shop where he sustained an eye injury, his father sat him down and demanded he attend an academic school. So he transferred to Jefferson High School, where teachers taught more than what was in class and inspired DeBernardis to expand his talents. For example, during his senior year he built a 16-foot boat to compliment his active involvement with Sea Scouts. Afterward, he became an officer in the U.S. Navy and served in World War II as a lieutenant commander.

This interest in the sea would pay off in an unusual way at PCC when the college established a marine technology program to teach students about boatmanship, boat repair and maintenance. To get the program off the docks, the college secured a mooring near downtown Portland and purchased the TD-81 tug boat, which was in Ballard, Wash. DeBernardis and a collection of deans, administrators and a licensed skipper sailed the tug all the way from the Puget Sound to Portland in four days. The tugboat journey featured storms, a loss of power, a near miss of the Steel Bridge, and DeBernardis getting slammed into the bulkhead on some choppy waters when he tried to navigate the tug near Westport. Unfortunately, in the years after this grand endeavor the program was scrapped for a lack of enrollment. He was part of the Tyee Yacht Club, Portland Power Squadron, Blue Gavel and Coast Guard Auxiliary.

He attended Oregon State University (then Oregon State College) where he graduated with honors in industrial arts and vocational education. He completed his master’s degree at OSU in audiovisual aids and education, later earning a doctorate in higher education, curriculum and education administration from the University of Oregon. But his wish was to work as a shop teacher, which he did at Ockley Green Elementary School where he excelled as somebody who preached learning by doing through “the school of hard knocks.”

In the years following his retirement, Amo DeBernardis has had the College Center Building at the Sylvania Campus dedicated and renamed in his honor (1995) and the city of Portland proclaimed June 20, 1995 as “Amo DeBernardis Day.” He served on an advisory committee for vocational education under the Lyndon B. Johnson administration and served on the boards of KATU, Providence Hospital and Willamette University. He also was an active donor to the PCC Foundation and his family suggests memorial contributions to the Amo DeBernardis Scholarship Fund at the Foundation.

“He led the way in developing the Sylvania, Cascade and Rock Creek campuses,” said current PCC President Preston Pulliams. “He grew PCC from a division of Portland Public Schools to the largest institution of post-secondary education in the state of Oregon. Upon retiring, he remained a sage council for myself and the other college presidents who followed in his footsteps.”

Checks should be made payable to the PCC Foundation, PO Box 19000, Portland, OR 97219, Attn: Dr. Amo DeBernardis Scholarship.