This content was published: May 31, 2020. Phone numbers, email addresses, and other information may have changed.

HARTS: So you’re PCC’s Writer-in-residence. First of all, is this a new position? What is it exactly? Yeah, it’s the first year, the pilot program. I’m a guinea pig! And a happy one. PCC President Mark Mitsui pitched the idea of an Artist-in-residence program to the HARTS Council last August. He was inspired by programs he saw during his time in the Obama Administration— artists were invited to sit in on administrative meetings, so they could take part in those dry processes that would otherwise lack the creative perspective artists can bring.

HARTS: So, is that what you do? Sit in on meetings? Yeah! I’ve had the immense pleasure and privilege of being the poet in the room for many of the Strategic Planning and reorganization meetings. I’ve mostly listened, absorbed, but I’ve also chimed in when I felt qualified as a teacher and writer, trying to help shape language and vision. The school is undergoing massive change, and I think it helps to have a metaphor-maker sitting at the table. 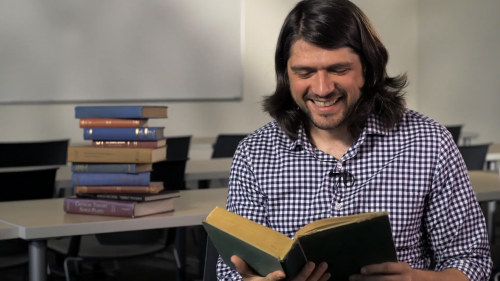 HARTS: That makes some sense, the artistic perspective, but can you give us an example? Oh, gosh—well, I think it was my first meeting with Vice President Sylvia Kelley and Traci Fordham, and we were discussing trajectories, et cetera, and I got really hot on this idea of the school being like a living organism, a cell, the implications of it, and I wouldn’t shut up about it. I was excited! I felt bad for the poor consultant they had in there that day.

HARTS: That’s amazing. So what else have you done as Writer-in-residence besides sitting in on meetings? Well, I’ve written a few poems and an essay for the school but I’ve also been doing a bi-weekly poetry post on Inside PCC called “Two Deep Breaths” – I post poems by faculty or nationally recognized writers, poems “to lift your spirits, to help you catch your breath” is what it says. Although recently I’ve posted a few somber ones, given the circumstances.

HARTS: Yeah, there’s a lot that’s happened since you took on the position. How do you see your role with regard to everything going on, first a virus shutting down the school and now the protests against racialized police violence?  I stand with the protestors. I’m a white guy, which means I’ve got an inordinate amount of privilege. How does my voice matter? It honestly doesn’t, not right now, so besides speaking out against white supremacy, I’m trying to step back and focus on foregrounding the voices of writers of color, like this week’s poem by Danez Smith. And if you haven’t yet, please go back and read Tricia Brand’s “Woke at Work” articles, also on Inside PCC. Tricia is PCC’s Chief Diversity Officer, and we’re really lucky to have her.

As for the virus, I think the college has handled it remarkably well—we’ve got amazing people like Tricia and Mark and Katy Ho in leadership who are very very capable, even visionary. They’re steering this ship toward equity and unity and sustainability, a leader among colleges in the Northwest, and I’m really proud to be a part of all of it.