This content was published: April 19, 2019. Phone numbers, email addresses, and other information may have changed. 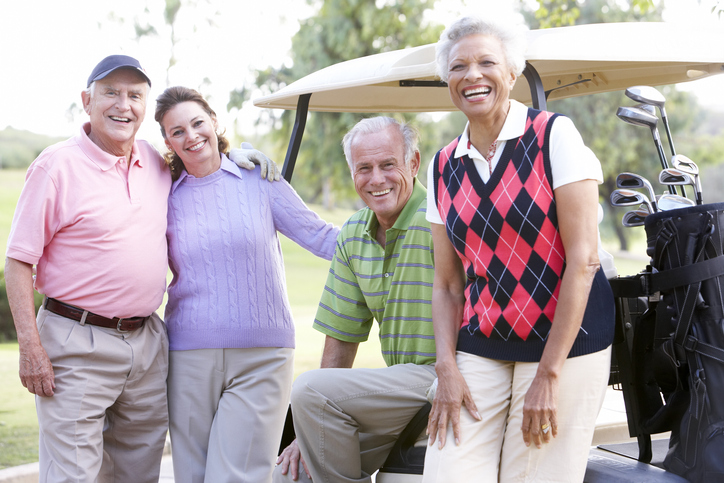 Golf has been around since at least the 15th century, when it first became popular in Scotland. Before that, similar games were played in Rome and China. A 1368 Ming Dynasty scroll even appears to show someone playing a game with the main elements of golf.

Today, golf is one of America’s favorite pastimes. It provides fitness, relaxation, social activity, a chance for networking, and plenty of outdoors time. The term “fitness” may not naturally come to mind when thinking of golf, but golfers actually use more calories than gymnasts. Players who do not use carts or caddies burn up to 360 calories per hour. Gymnasts, on the other hand, typically burn just 345 per hour. That said, many play the game to relax and socialize, and do use carts and/or caddies so the focus is on the fun.

About the Game of Golf

This game is classified as a precision club-and-ball sport, where players compete to get balls into the holes on a golf course. Several different clubs and stroke types are used. The goal is to complete the course with the fewest possible strokes.

Unlike many games, the playing area is not standardized. Each course is highly individual, and courses are often designed with specific difficulty levels in mind.

Below is a brief timeline of notable events in the world of golf:

Players need only clubs and balls in order to play. The course is typically owned and maintained by a club, municipality, or other such large organization.

Golf clubs each have a shaft with a grip, or “lance,” at the top and a club head at the bottom. Long clubs are used to propel the ball long distances, while short ones have a higher degree of loft, but send the ball shorter distances. The terms “long” and “short” refer to how far they are supposed to send the ball, not the length of the shafts.

Clubs are made from a variety of materials and come in several types, and golfers select the one they think will be best for a particular shot. The top types are “woods,” which are actually made of metal in modern times; irons, which are shorter in length; hybrids, which have characteristics of both woods and irons; and putters, used on the green for the final shots (“putts”).

Golf is great as both a social activity and a sport, and one of the best ways to get started is to take lessons or a class. PCC offers golf courses and provides instruction to help you get the most from your outings. Students will learn the fundamentals of golf, including putting, chipping, full swing and basic rules and etiquette. Sign up today for access to PCC golf courses, instructors, and of course, to have fun!