This content was published: February 19, 2018. Phone numbers, email addresses, and other information may have changed. 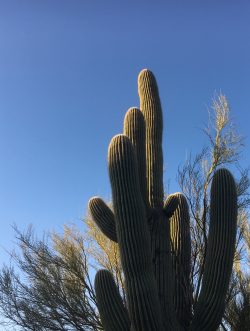 I had the good fortune to attend the ITC eLearning conference last week in Tucson, AZ. Rather than a specific Best Practice, I wanted to share a few things that stood out to me from the conference that seem timely based on what has been happening here at PCC.

This presentation was by Kirsten Butcher, PhD from the University of Utah. She herself is an instructional designer but also teaches to aspiring instructional designers. The presentation was great (and my full notes from this session are in Spaces), but I want to focus on her defense of multiple-choice question as a tool for deep learning. From working with faculty for years, we know that there can be problems with multiple choice questions. However, Kirsten argued that they can be an excellent tool for formative assessment if you write them well and provide constructive feedback. And using the LMS quiz tool means instant feedback for students. To summarize her session:

There was a lot more but too much for a brief post, so I suggest checking out my notes or her slide deck.

This session detailed the efforts behind a grant-funded program to increase student retention (especially among minority and first generation students) by using a combination of high-tough interaction facilitated by technology tools. There are many such projects like this, but I appreciated that this project has been happening now for several terms and has useful data. I also appreciated that the co-presenter identified himself as a non-technical instructor. Some of the biggest take away ideas were:

Again, this was an info-packed session. I’ll try to add the slides to my notes but they weren’t that pretty. One of the things that I think might most resonate with instructors was something Tom mentioned. “Teaching is more fun now!” He acknowledged that there was more work in the setup and first week, but overall, less time was spent on administrivia. And the course evaluations from students were much higher than those in the control group.

It shouldn’t be any surprise that students really appreciate interaction with their instructor. That seems to be time and time again one of the most valuable things online students refer to. I also attended a panel discussion from online students from Pima Community College. Interaction and timely feedback were the most critical things for them to stay motivated and feel connected.

I'm the Director of Learning Technology & Innovation (LTI!), where I oversee our infrastructure, technical support, and online student services teams. I've been with the College since 2001 and have worked in several positions, from tech... more »

x by Peter Seaman 4 years ago

Thanks, Andy, for sharing your main takeaways from the conference. I’ve been pushing the quiz tool as a *learning* tool, as opposed to an assessment tool, for years. Well-crafted, automatically graded questions can be an outstanding means of helping students check their understanding. And the LMS never gets tired! Students can complete quiz after quiz, as many times as they need to, to achieve mastery in a subject-area. Nice to hear that leading thinkers support this approach. – Peter

x by DeLyse Totten 4 years ago

Andy – I’m so glad you shared this! I found the information on how to effectively use multiple-choice questions intriguing. While I haven’t (yet) used this exact approach quizzes, I do use a similar approach for online multiple-part homework problems and it seems to work well to help students learn the information. Hmm….It sounds like I now need to make an intro video :-)

x by Shirlee Geiger 4 years ago

THANKS for sharing the PPT from Kirsten Butcher. (I am still working my way through that one, and not yet ready to move on to Roddenberry and Rankin!)

The idea of deep, low-stakes formative quizzes sounds WONDERFUL to me. But I am not at all confident I have the distinction clear between deep and shallow quiz items (especially multiple choice.) Do you by any chance have any other resources to recommend? I am thinking about investing the time to change my strategies for using quizzes — which would be a LOT of time — but I want to get more confident before I go forth and put this good idea into practice!