This content was published: October 22, 2015. Phone numbers, email addresses, and other information may have changed.

On a hot, steamy August day under the Tualatin Hills Parks and Recreation District’s soccer field pavilion, Walter Arevalo is the center of attention.

Arevalo welcomes players to the artificial turf field next to Portland Community College’s Rock Creek Campus (17705 NW Springville Road), handing each their blue-and-white jerseys, white shorts and multi-band long socks with impressive skill and swiftness. It’s made a bit harder amid the playful shouting and general craziness that comes with corralling 25 college students for a team photo. 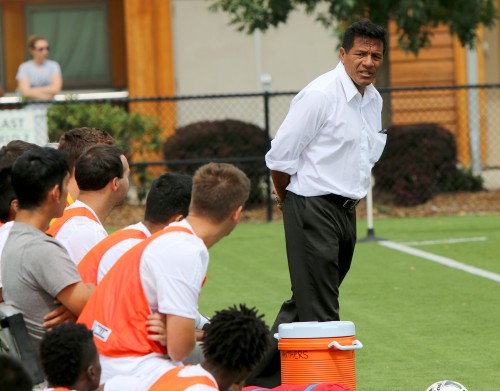 Walter Arevalo, who earned an associate degree in Computer Information Management from credits he garnered at PCC and the U.S. Air Force Community College, holds a FIFA and Conmebol Associate “A” License from Peru and Brazil.

“It’s part of the administration skills,” he said with a shrug and smile.

It’s not any team photo day. It’s a day that signifies the reboot of PCC’s new intercollegiate men and women’s soccer teams, both competing in the Northwest Athletic Conference this fall. The college announced this past spring that it was bringing back soccer and held a series of tryouts in June. Arevalo was named the first men’s coach while respected former Astoria High School boys coach Bill Patterson was picked to lead the women.

It isn’t the first time the PCC Panthers pounced on the pitch. PCC briefly sported intercollegiate teams in the NWAC in the early 1990s with the men placing runner-up in 1994 in the league championship. From the late 1960s until the early 1980s the PCC club soccer team was a force among similar teams throughout the Northwest. The Panthers captured state titles in 1971, and 1977-81 and in 1982 beat Oregon State University 2-1 in the title club game, their last trophy.

On the men’s side, Arevalo isn’t phased by the frenetic moments of getting players ready for a team photo or to play a real intercollegiate season. In 1989, he moved to the U.S. to seek political asylum from Peru where he trained the police’s special forces in handling explosives. He quickly joined the U.S Air Force and Air National Guard, enjoying a long career before retiring in 2009. When not at PCC, he’s on the coaching staff for the Olympic Development Program with the Portland Timbers and Thorns FC that supplies players to the regional and national teams.

Arevalo, who earned an associate degree in Computer Information Management from credits he garnered at PCC and the U.S. Air Force Community College, holds a FIFA and Conmebol Associate “A” License from Peru and Brazil. The former club coach was working at Centennial High School and Forest Grove School District as a bilingual monitor and English for Speakers of Other Languages assistant teacher, respectively, when he entered coaching and worked his way up through the local ranks.

Arevalo said he’s excited by the potential of his Panthers, which has players from Paraguay, Congo, Hillsboro, Beaverton, Forest Grove, Milwaukie and others. 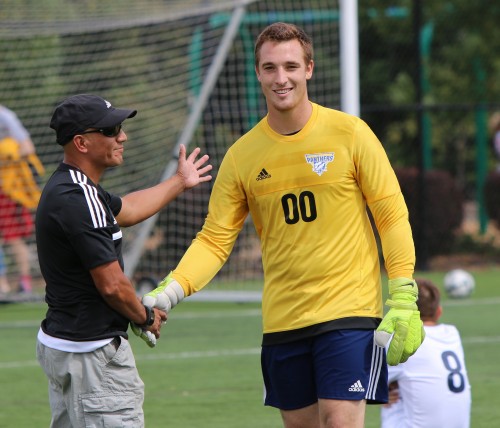 Tim Hancock cut his teeth playing intramural soccer on the Ramstein Air Base in Germany. Whether it’s playing keeper or learning how to fly, Hancock is stoked to be at PCC.

“I’m a competitor and a competitive coach so I don’t want to say right now that we’ll get to the finals, but it’s pretty much the feeling of the players,” he said. “I want to be in the finals and I believe we have a chance because we have good players.”

Midfielder and computer science major Marcelo Franca said he’s pumped to have soccer back at Oregon’s largest post-secondary institution and said, “I’m over the moon about starting the season. This is going to be my first time playing college soccer and that’s a big excitement. I take a lot of pride in being here and playing for PCC.”

Panthers keeper Tim Hancock shares that sentiment. Aiming to be an Alaskan bush pilot, the Colton High School graduate served in the Air Force from 2010-13 and is using the GI Bill to earn his associate degree in Aviation Science at Rock Creek.

“I really want to transport people to remote locations and into very, very small airfields that most pilots wouldn’t normally land on,” Hancock said. “I like the adventure so I’m going to go try to do that.”

Hancock cut his teeth playing intramural soccer on the Ramstein Air Base in Germany. Whether it’s playing keeper or learning how to fly, Hancock is stoked to be at PCC.

“We are really excited about the first soccer season and I think we have a lot of chemistry as a team,” he added. “We’re starting to become a family and were gonna see if we can win some games.”

While Arevalo hurriedly tried to get his players clothed for the team photo, women’s head coach Bill Patterson was putting his players through their paces during practice on the artificial turf. Patterson, who has coached soccer for 20 years and is a philosophy instructor at the Rock Creek Campus, got intrigued by the sport because of his kids, who were top high school players in the 1990s. As they progressed through the ranks, he would watch the coaches and became interested in their craft. 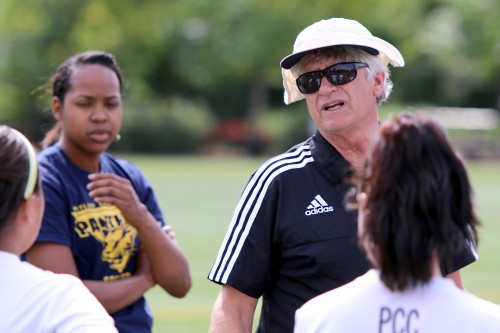 Bill Patterson, who coached two adult national championship amateur teams, led Astoria to six league titles and to the state playoffs every year during his 10 years there. Not bad for a guy who never played soccer as a kid.

Eventually he got licensed to coach soccer and was hired to be the head coach of the Astoria High School boys soccer team. Patterson, who coached two adult national championship amateur teams, led Astoria to six league titles and to the state playoffs every year during his 10 years there. Not bad for a guy who never played soccer as a kid.

At PCC, Patterson hopes to build around talented core players with a sharp, crisp passing and possession style.

“I’m really encouraged by the season,” Patterson said. “We have a group of committed players who want to get better and play as a team. They put their uniforms on with great pride. That’s a great thing – to give these players who may not have the opportunity to play intercollegiate sports a chance to play. They get to represent their community, their school and themselves.”

Midfielder Yvette Barrera is definitely looking forward to it. The computer science major from Boardman has played soccer for four years and chose PCC to save money on her college education and continue her soccer exploits. She said practices have been an opportunity to get to know one another and build chemistry with players who hail from such locales as Tanzania, Malaysia, Hillsboro and Tigard.

“All the girls are really friendly and I like the practices, too,” Barrera said. “The community should come out and support us.”

For more information on trying out for any of these teams, call the PCC Athletics staff.

Is there a PCC website where I could learn more about the new soccer teams?

x by Adan duale 7 years ago

I want to know when is our next tryout please, so that I can participate. I played soccer in high school and I’m pcc student also. Do we have one in the fall term also?

x by Adan duale 7 years ago

I want to know when is our next tryout please, so that I can participate. I played soccer in high school and I’m pcc student also. Do we have one in the fall term also?

Hey you bet Gabriel and Adan, you can contact any of the PCC Athletics staff listed here: http://www.pcc.edu/about/athletics/staff.html

[…] has rebooted its intercollegiate men and women’s soccer teams, both competing in the Northwest Athletic Conference this fall. The college announced this past […]

x by Wilson Zevallos 7 years ago

If you need extra help coaching. let me know

congratulations to pcc for reviving the soccer programs.i started the soccer program at the college in 1966.i taught pe soccer classes, and coached the game until 1972, when I became the athletic director at the college.in 1971 my team won the(oisa) Oregon intercollegiate soccer association championship.pcc was the only community college in the league at that time.my overall win /loss record was 41 wins 1 loss.
as the ad for pcc I had the good fortune for hiring all subsequent soccer coaches from 1972 through 1981.i am very proud of the overall playing record of the program during my tenure in the pe dept.you have my best wishes for a long and successful pgm.coach emeritus,bill macdonald

Congrats and thanks for that bit of history on PCC’s proud soccer past, Bill!

x by John Wangusi 7 years ago

I AM SO EXCITED TO BE A PART OF THIS OPEN FORUM WITH RESPECT AND ASSURE THAT MY VIEWPOINTS WILL ALWAYS BE IN LINE WITH THE CONVERSATION AND NEVER ABUSIVE.

IM A NEW STUDENT AT THE PCC AND, IM A SOCCER PLAYER A GOOD ONE BUT I DONT KNOW THE PROCEES TO BE A PART OF THE PCC MEN SOCCER TEAM.