Lisa Albarran scored two goals, leading Portland to an important 2-0 win over Chemeketa Oct. 21 in the rain at the Rock Creek Campus.

The result keeps the Panthers firmly entrenched atop the NWAC Southern Region standings, with one game to play. That matchup will feature 2nd place Southwestern Oregon, with the region championship potentially on the line.

PCC scored one in each half, both off the foot of Albarran who raised her season total to 12.

The Panther defense was once again up to the task, holding the visiting Storm to five total shots. Goalkeeper Sophia Barr made four saves to keep the clean sheet.

The clash with SWOCC will take place on Wednesday, October 26th at 2pm and held at the Rock Creek Recreation Fields.

Another Shutout at Lane CC

The Portland Community College women’s soccer team posted their eighth shutout of 2022 with a 4-0 win at Lane CC on Oct. 18 in a make up of a postponed match from last Saturday. 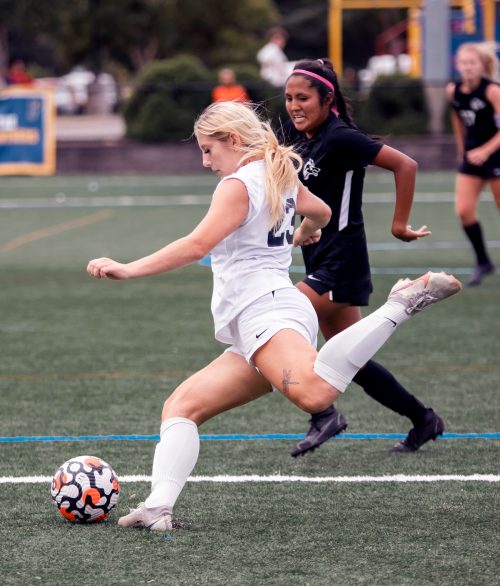 Nyah Jalof on the move.

Goalkeeper Sophia Barr and the Panther defense held the host Titans to just one shot for the game, and have given up just two goals on the season in NWAC Southern Region Play.

Despite launching 12 shots at the Lane goal in the first half, the score at the break was 0-0 thanks to 11 saves from Lane goalkeeper Kaylin Dea.

The second half was a different story, as PCC put four into the net. Lisa Albarran scored her 10th goal of the season in the 62nd minute, with the assist going to Ava Martins.

Paige Nguyen added an unassisted goal in the 67th minute, followed almost immediately by a goal from Mya Smith.

Smith then got her brace by tacking on the final goal of the game in the 87th minute.

The result keeps Portland perched atop the region standings at 7-1, and a playoff berth is already secured. Now the Panthers look to claim a region championship with two huge contests on the horizon. Chemeketa and Southwestern Oregon visit PCC next week, and both are tied for second place in the region at 6-1-1. Two wins by PCC will give the Panthers their first ever region crown.