This content was published: May 21, 2020. Phone numbers, email addresses, and other information may have changed.

Last summer, President Mitsui contacted HARTS with a visionary idea: to have artists participate in the administrative process. Inspired by a similar program he had seen during his time in the Obama Administration, he hoped these artists would bring their creative perspective to the Strategic Planning and reorganization PCC is currently undertaking. Over the next month, the HARTS Council worked together with the President and his cabinet to create two pilot artist-in-resident positions, one of which I hold as Writer-in-residence. The other, PCC’S 2019-2020 Artist-in-residence, is held by Sandy Sampson (a third artist-in-residence, Rochelle Nielsen, is preparing now to cycle into the role). I interviewed Sandy (they/them) to help give you an idea of who they are and what their position as Artist-in-residence is all about. 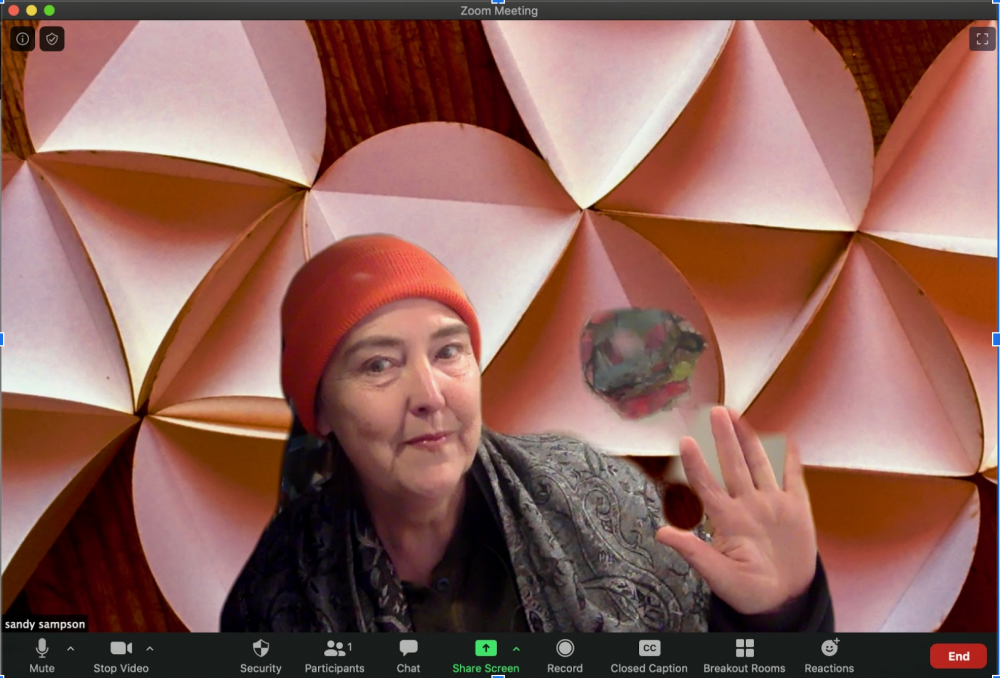 JUSTIN: Hello, Sandy! First off, tell us a little about yourself— your background, your art practice.

SANDY: Hi! Well, when I moved from Denver to Portland in 1982, I took classes in graphic design here at PCC. After that, I moved to the UK for about 5 years and worked for a design studio in London. London and Glasgow— then back to Portland.

I worked a wide variety of jobs—as a scenic artist, mostly for Opera and Ballet, and even some work on contract for Will Vinton studios back in the day (now Laika)— but that work was pretty incompatible with single parenting, so I tapped back into PCC to learn some “marketable” skills.

After a few years of working a  “straight job” with a financial consultancy, I started to feel like maybe I could do something I believed in rather than helping to make rich people richer (I was in the hedge funds department). I decided to go back to school, this time to PSU, with the goal of becoming a teacher of art.

As an artist, I first started showing in Denver as a painter, but I was soon doing performance and more conceptual work— including something I didn’t think of as “art” then but now would call Social Practice, or socially-engaged art.

Whether I work with paint or other materials, I try to match the media and process to the project. When people ask me what medium I work in and I say that I’m involved in more project based work, that’s what I mean. The objects I make are most exciting and successful to me when they are artifacts of a process, particularly a collaborative process, when they come preloaded with a shared history. 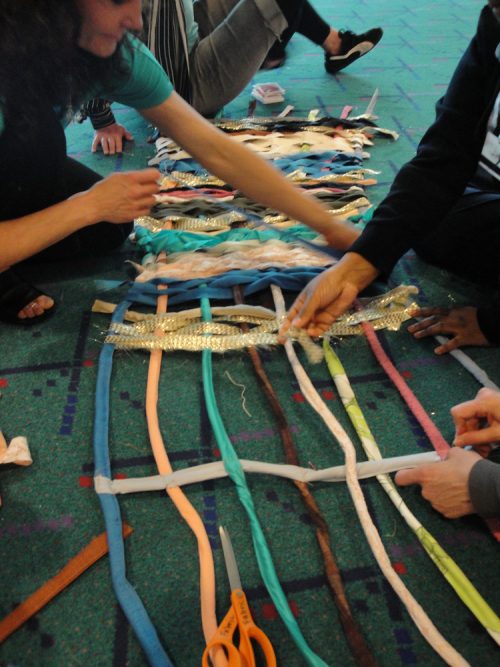 JUSTIN: You said you earned your MFA at PSU with the goal of being a teacher. How long have you been teaching? What do you teach?

SANDY: Once I received my MFA in 2009, I began teaching pretty much right away, One term at PSU, and pretty shortly after at PCC—so, a little over 10 years. I always teach drawing, and lately also design, black and white and color, and occasionally painting or experimental media with a socially engaged art focus.

JUSTIN: So, you are one of PCC’s two Artists-in-residence— what’s it been like so far? What has your position entailed?

SANDY: It’s been really amazing. Just the fact that this is happening is so exciting. Incredible, really. It’s also been a bit like that children’s book “Harold and the Purple Crayon”—you know, the one where he draws what he needs around him and under him as the need arises.

We were asked to reflect on and convey something about some of the changes that PCC is building right now— specifically the Strategic Plan, the reorganization, and the YESS initiative. Whether what we made was about the feelings people are having about these changes, the processes of building these changes or something else related to them was left entirely up to us. As is the form.

Even though what we make and how we make it has been up to us, the administration has invited us to sit in on meetings where these things are being discussed. Very powerfully in the fall, my first real introduction to this project was attending many of the facilitated listening sessions with various groups district wide.

It is so unusual for an institution, or more to the point, for people holding power in a large institution, to recognize the value of artists, not simply for their abilities to manifest an object or textual composition, but for the different lenses we bring. This is a profound acknowledgement of the importance of diverse perspectives in every aspect and at every level.

JUSTIN: Are you working on a project for the residency? If so, can you give us a hint of what it is?

SANDY: Yes, as I mentioned earlier, I try to find a material or form that makes sense conceptually, and then work with it collaboratively. I’ll tell you it really took me a minute to latch on to an idea I felt was right— but I have.

So, I’m going to make a form, and the idea is to create a basic material to eventually build with. That basic material starts with a surprising ingredient: dryer lint from the PCC community. That way, everyone’s experience will already be embedded in the actual material that the form is built from. 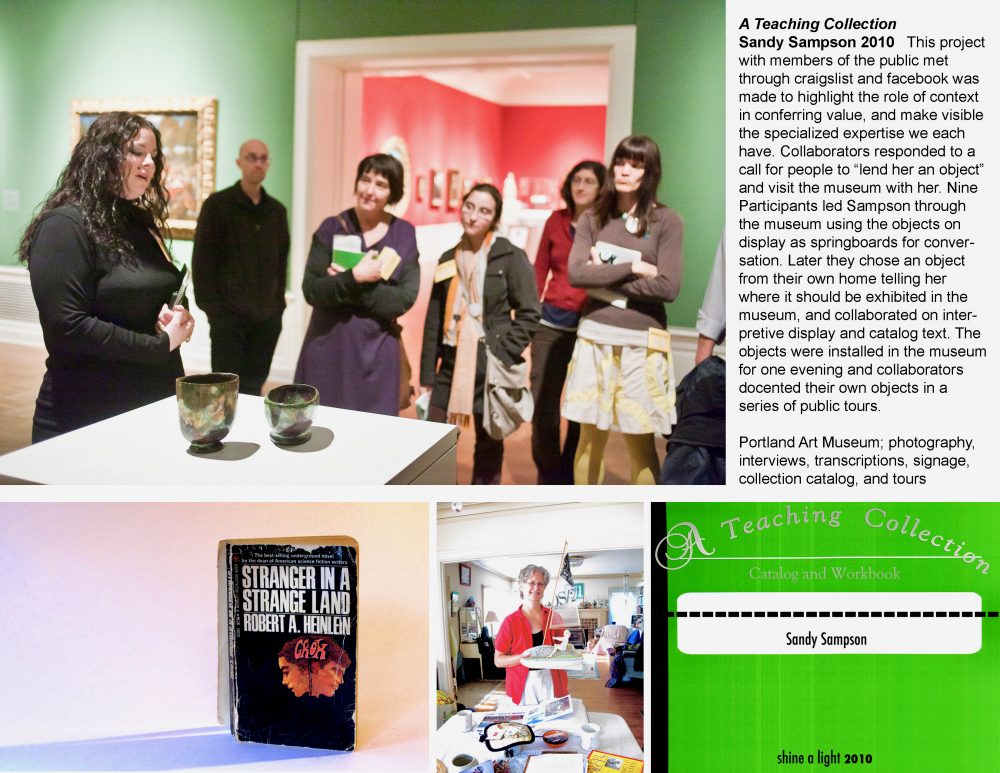 To do all this, I’m making use of some of PCC’s amazing resources, the printing presses, and the laser cutters, in order to create a modular system. Then I’ll ask folks to come together to help me assemble the form, and each time we meet to stitch these pieces together, we’ll also be talking about our stories of change, the story we would like to see PCC enact. What’s the narrative we want to see—what’s the change that we imagine?

My project was all about change from the beginning, and now we’re all experiencing change of a whole different magnitude, which I’m sure will be manifested in the project. I’m having to alter my process since I no longer have access to certain facilities and equipment, but the most important need I have is for collaboration, so I’m shifting up my process to include snail mail and zoom, at least for now.

I’m really excited about it— this project is evolving a lot like Harold and his purple crayon; a project about change that is changing its form in response to the changing context of its making!

For more information about Sandy’s project and to get involved, contact them at sandy.sampson@pcc.edu.