This content was published: June 14, 2021. Phone numbers, email addresses, and other information may have changed.

Portland Community College Gerontology Program faculty Jenny Sasser was recently named a Fellow by the Gerontological Society of America (GSA) in the Academy for Gerontology in Higher Education. The status of Fellow — the highest class of membership within the Society — is an acknowledgment of outstanding and continuing work in gerontology. 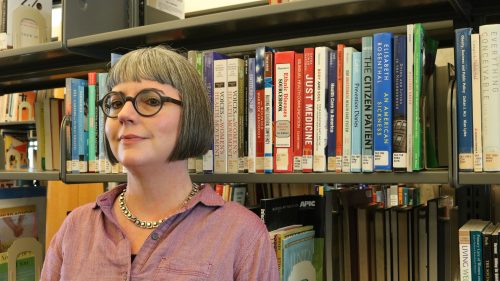 “I have been involved with the Gerontological Society of America and the Academy for Gerontology in Higher Education starting when I was a graduate student and throughout my multi-faceted career as an educational gerontologist, so receiving this honor is quite meaningful to me,” Sasser said. “Being named a Fellow not only recognizes my own work but the work of my treasured collaborators, colleagues, and students.”

GSA, which is the nation’s largest interdisciplinary organization devoted to the field of aging, named 38 exemplary professionals as its newest fellows. Sasser is one of three new fellows in the Academy for Gerontology in Higher Education and the only person from a community college in the list of 38.

“As a nationally recognized author, in-demand speaker, exceptional teacher, and former program administrator working in the field for more than 30 years, Dr. Sasser has distinguished herself within the field of educational gerontology,” said Mike Faber, a gerontology instructor who nominated her for the honor. “We are fortunate that she is part of the gerontology faculty team at PCC.”

Sasser has been working in the field of gerontology for more than half her life, beginning as a nursing assistant and senior citizen advocate before focusing on scholarly inquiry and education. Before joining PCC in 2016, she served as Chair of the Department of Human Sciences and Founding Director of Gerontology at Marylhurst University from 1999 to 2015. She is also an accomplished author with multiple publications.

Sasser and the 37 other new fellows will be formally recognized during GSA’s 2021 Annual Scientific Meeting, which will be held in November in Phoenix, Ariz.