This content was published: September 18, 2017. Phone numbers, email addresses, and other information may have changed.

Most weekdays, Sylvia Koch commutes from Fairview to Portland Community College’s Cascade Campus eager to attend classes for her nursing degree. But her first stop is Cascade Hall, where she drops off her 4-year-old daughter at the Albina Head Start childcare center.

This makes Koch fortunate compared to many of her peers. Studies have shown that parents with young children are often unable to attend college because they can’t find affordable daycare. According to the nonprofit organization Childcare Aware of America, in 2015, the average annual cost for an infant in center-based care was higher than a year’s tuition and fees at a four-year public college in 30 states (including Oregon) and the District of Columbia.

Koch, a single mother with three older children, said that before she enrolled her youngest at the Cascade facility, she had to rely on an in-home babysitter, which was not only costly but sometimes made attending class difficult.

“It would be a lot harder for me because of the financial situation — paying for childcare — and having to make sure the babysitter actually showed up,” she said. “Before my daughter started going to Albina Head Start, my babysitter wasn’t able to make it for a couple days and I had to miss school.”

More than 2 million community college students in the U.S. are raising a child, or 30 percent of all community college students. However, the Institute for Women’s Policy Research reported that while the number of student parents has been growing, the number of two-year colleges offering childcare has fallen from 53 percent in 2003-04 to 46 percent in 2013.

Portland Community College is among those that have made the commitment to offer on-site childcare to many of its students – a goal that would be realized if the college’s bond measure, on the November 2017 ballot, passes. At Cascade and Southeast campuses, new childcare facilities have been created thanks to the bond measure passed by voters in 2008. While Cascade’s childcare center is run by Albina Head Start & Early Head Start, Southeast’s is run by YMCA of Columbia-Willamette. At PCC Sylvania, the childcare facility is operated as part of the campus’ Early Education and Family Studies program.

If passed, the college’s 2017 bond measure would enable PCC to build a childcare facility at the Rock Creek Campus, as it currently is without this service line. 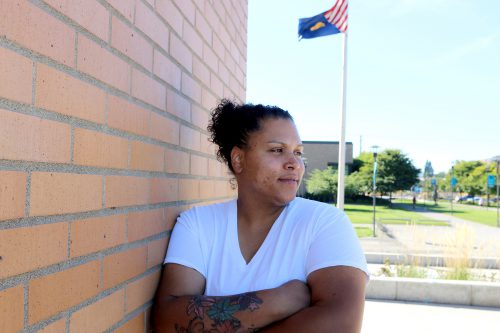 Sylvia Koch said PCC’s childcare services at the Cascade Campus have made a big impact on her ability to continue with her classes.

PCC’s existing centers serve infants through preschool-aged children. Care at Southeast and Sylvania campuses is fee-based, although grants and subsidies are available for some parents. Cascade parents must meet federal poverty guidelines, but care is free for those who qualify. Head Start’s program includes educational and wrap-around services that have been shown to be especially valuable for children from low-income homes.

Koch said that both she and her daughter appreciate Cascade’s center. “I like everything about it,” she said. “The staff are wonderful. They teach the children a lot, and I like that it’s at PCC, which is where I want to be. ”

“The parents are feeling more secure about the care of their children, which is allowing them to focus on school and other parts of their lives,” she said. “It’s allowed some of our parents to be able to go from part-time to full-time.”

x by vanessa 5 years ago

Was the author of this article aware of the fact that the head start program on this campus is suuuuuuper offended if you refer to them as “childcare”? My first phone call to them, when I was simply trying to get on a wait list, I got chewed out for even muttering the word “childcare.”

x by ashkan kordmahaleh 5 years ago

x by Chelsea Holt 4 years ago

I had an Algebra class with her awhile back and she told me all about this, although I wasn’t able to get my son into Head Start, I was able to get childcare assistance. Thanks Sylvia!