This content was published: November 17, 2015. Phone numbers, email addresses, and other information may have changed.

Another successful bond project has been completed on the Sylvania Campus and just in time. 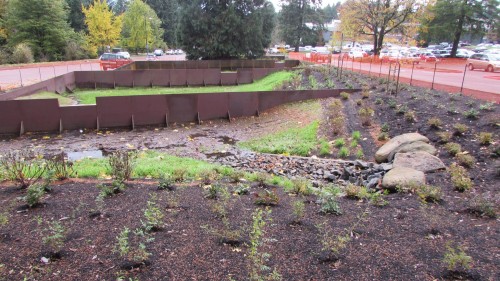 The detention pond, with its layers of plants, filters pollutants from the water, slows the water flow and reduces erosion.

The new large storm water mitigation structure near Parking Lot 5, on the south side of campus, handled a massive rainstorm runoff that occurred last month, moving thousands of gallons of water through the three-tiered system. The detention pond was built with funds from the 2008 voter-approved $374-million Bond Program. It is one of many storm water mitigation projects on campus that are designed to control water flow and improve water quality as well as fish and wildlife habitat.

Storm water runoff can have a negative effect on neighboring land and watersheds. The Sylvania Campus is covered in more than 50 acres of non-permeable surfaces, which includes asphalt parking lots, walkways, buildings and other structures. The rain that falls from the top of Mt. Sylvania, upper neighborhoods and streets, down through campus, and into local watersheds can carry oil from vehicles, silt and other pollutants. The rate from that water flow can also cause significant erosion over time. The detention pond, with its layers of plants, filters pollutants from the water, slows the water flow and reduces erosion.

During the Halloween day storm, when more than two inches of rain fell in just a few hours, the terraced basins of the new detention pond were full, but the system worked as it was intended. The flow was slowed significantly, taking more than two days to move through the ponds, into adjacent storm drains and into nearby Ball Creek. Ball Creek empties into Fanno Creek, which eventually reaches the Tualatin River.