This content was published: June 17, 2009. Phone numbers, email addresses, and other information may have changed. 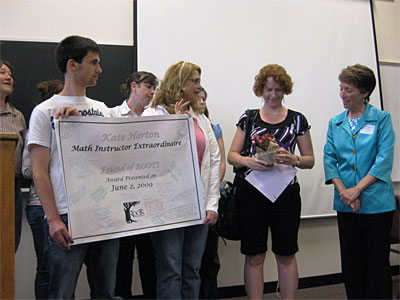 Sylvania ROOTS students John Zeller and Andrea Hoskins offer a “thank you” banner and gift to Math teacher Kate Horton, who was chosen as this year’s recipient of the “Friend of ROOTS” award for her ongoing dedication and guidance to the class. ROOTS Director Lynn Montoya (far right) looks on. “Dream it to be it” was the theme of the 2009 end-of-year completion ceremony on June 2, hosted by the program, which is a federally funded TRiO Student Support Service Program, established by Congress to help low-income, first-generation students and students with disabilities succeed in college.

This year there were 26 graduating and transferring ROOTS students and several won scholarships to continue their studies at the university level. In the past academic year, 86 percent of its students were in good academic standing; 54 percent received Academic Honors during the school year; 17 percent graduated or transferred to a four-year school; 78 percent enrolled in school in the fall, either at PCC or a four-year school; the students received more than $40,000 in specialized scholarships from PCC; and ROOTS students donated more than 2,000 hours in volunteer time, in their communities.