This content was published: July 26, 2018. Phone numbers, email addresses, and other information may have changed. 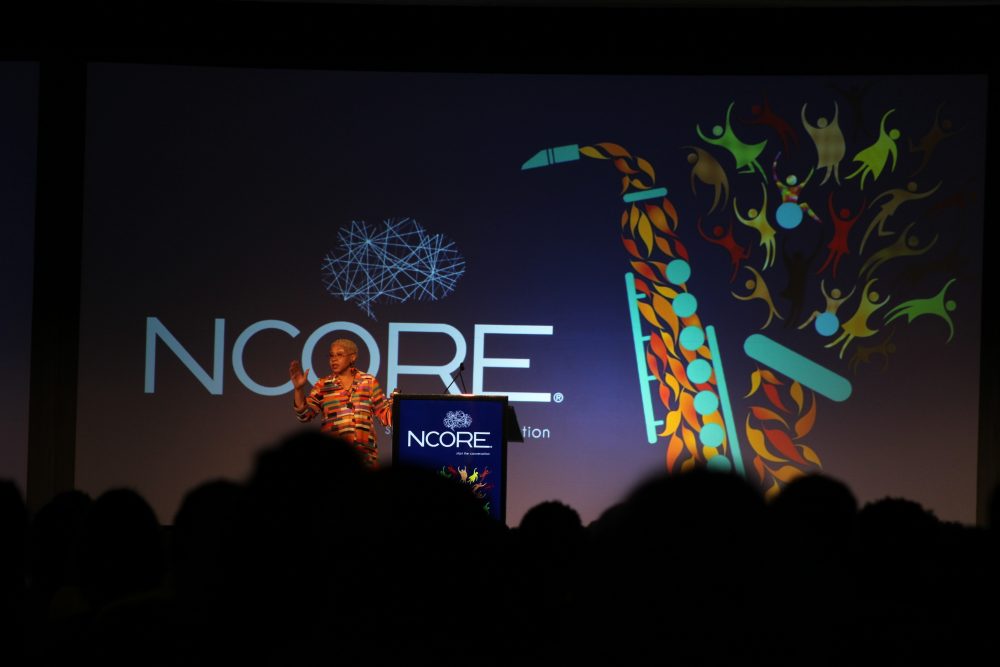 In June a handful of PCC students, staff, and faculty attended the 2018 National Conference on Race and Ethnicity in American Higher Education (NCORE) in New Orleans, Louisiana. Personally speaking, it was an honor to be a first time attendee to this incredibly impactful (and humbling) conference. As both a student focusing on environmental justice while also being a member of the sustainability department here at PCC, it has become ever more abundantly clear that the issues surrounding diversity, equity, and inclusion are deeply connected with those of the sustainability movement. Indeed, the two are inseparable and it is a true injustice to even try and create a sustainable future without incorporating the important and ever increasingly hot button topics surrounding social justice issues and the voices of those most effected and negatively impacted by them in today’s world.

The 5 days attending this conference proved to be personally transformative in more ways than one. I am looking forward to the conference making its way to the Pacific Northwest next year and landing right here in Portland. NCORE 2019 is going to be something this city is certainly in need of right now. In what is presently considered to be one of the whitest and least diverse bigger cities in the country, Portland could use a bit more of let us say, color. NCORE 2018 had over 4,000 attendees and as one of the small percentage of white males in attendance, I cannot speak highly enough of how empowering and encouraging it was to be among such a diverse population at a conference that is working towards a better future for all through higher education.

Interestingly, this is precisely what the AASHE (The Association for the Advancement of Sustainability in Higher Education) conference and WOHESC (Washington Oregon Higher Education Sustainability Conference) are working towards except they are coming specifically from the environmental sustainability angle while NCORE is coming from the social justice and diversity point of view. It’s true though that the intersection of these movements is already underway and I see a great deal of very rewarding (and likely sometimes challenging) collaborations occurring between these two fields. It would be incredible to see a national summit come about between AASHE and NCORE, I believe that would be a really great step in the right direction. Consider that seed planted… 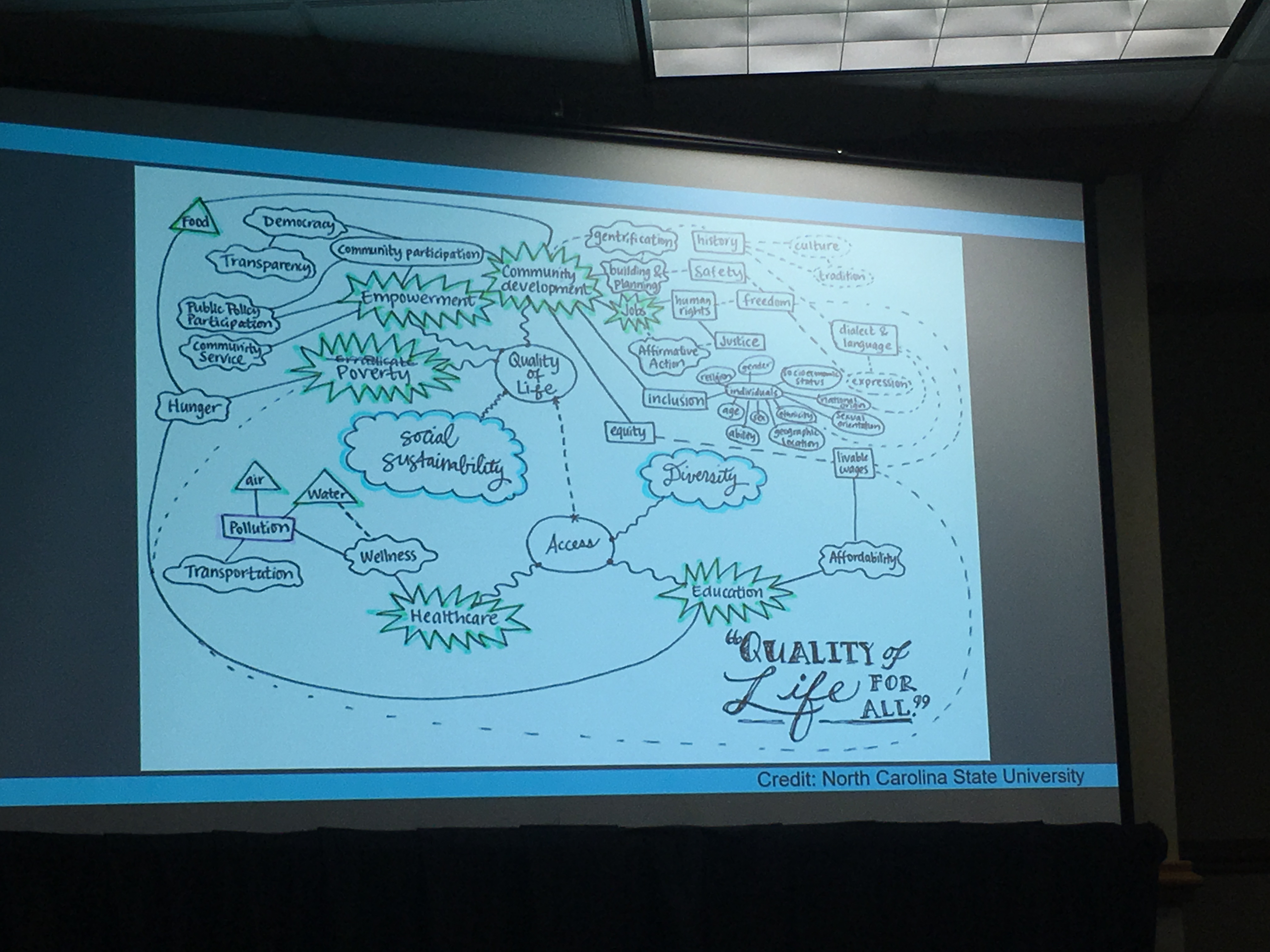 ‘The web between the worlds: sustainability & diversity’

Speaking of the intersections between these worlds, the very last conference workshop I attended was actually based on this idea of collaboration between sustainability departments and the offices of equity and inclusion. It was called “Turbulent Winds: Addressing “Climate” at the intersections of Diversity and Sustainability”. It was presented by three different California State Universities (East Bay, Monterey Bay, & San Marcos) and it was precisely the kind of session that I was looking for to help bring back some good ideas for our school to work on. We here at PCC are doing a great many things when it comes to initiatives, programs, and sustainability focus in our curriculum though I know there is a good deal of room for improvement when it comes to developing our best practices between departments in our social justice and sustainable pursuits. 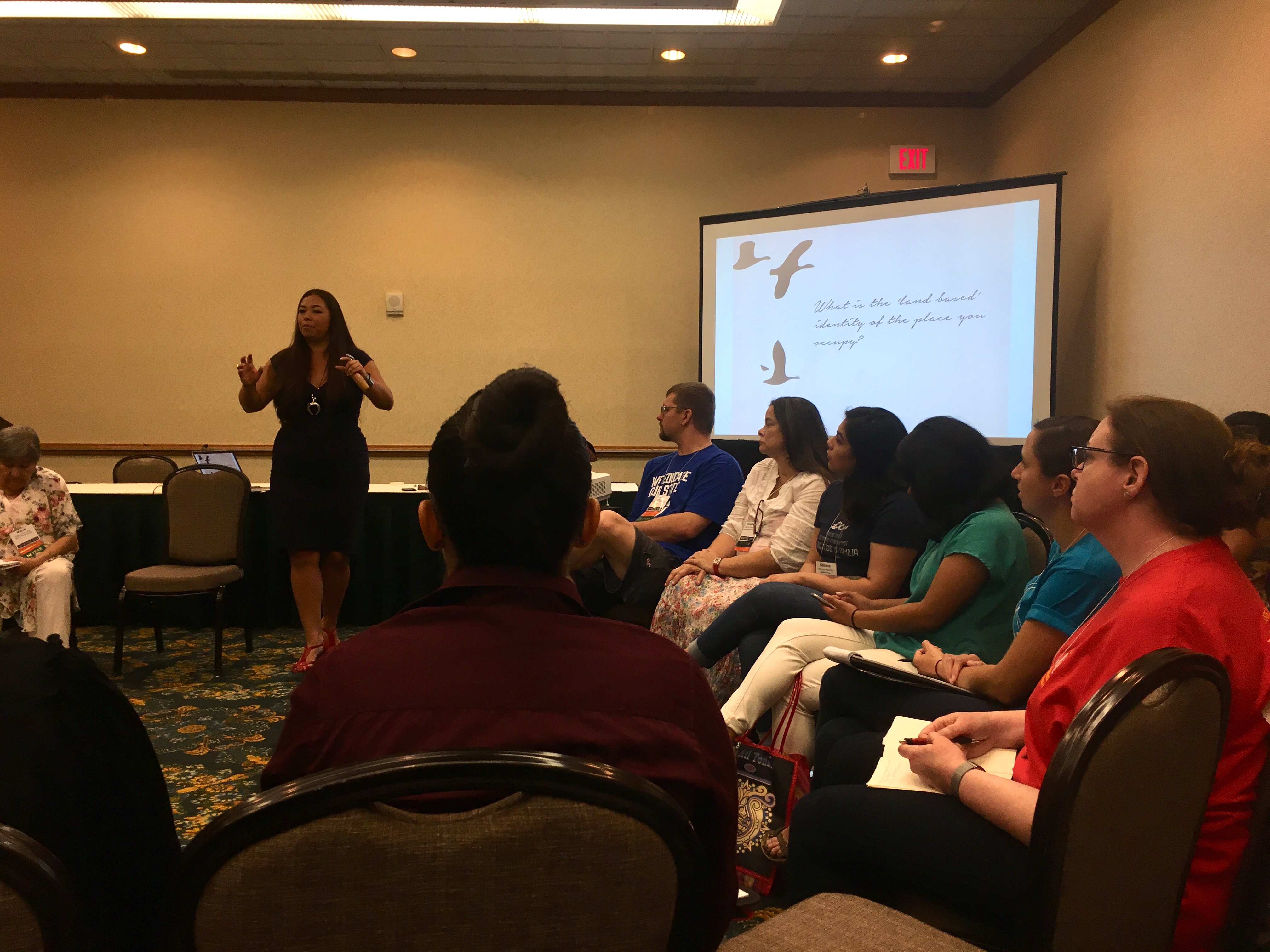 Matika Wilbur “What is the land based identity of the place you occupy?”

One of the other big areas that we at PCC are addressing is land acknowledgments and embracing the past and present stories of the Native Nations who lived here long before USA was even a twinkle in the eye of some colonial European conquerors. This question of land, identity, and occupation was a part of the focus of Matika Wilbur’s workshop session. It was both inspiring and humbling, and her passion and laughter are infectious to be sure. Wilbur is on a mission through Project 562 to document through photography the 562 federally recognized tribal nations and the people and culture that make up each of these groups, it’s a beautiful way to help everyone in America remember that these native people are still here celebrating their rich and diverse cultures and are not just a part of a past history. She has been at it for over a year now and already has collected many great stories (and pictures) to share. This journey that Wilbur is on swings between many realms of story telling and certainly weaves in supporting and encouraging more first nations curricula being taught across all levels of the educational spectrum. 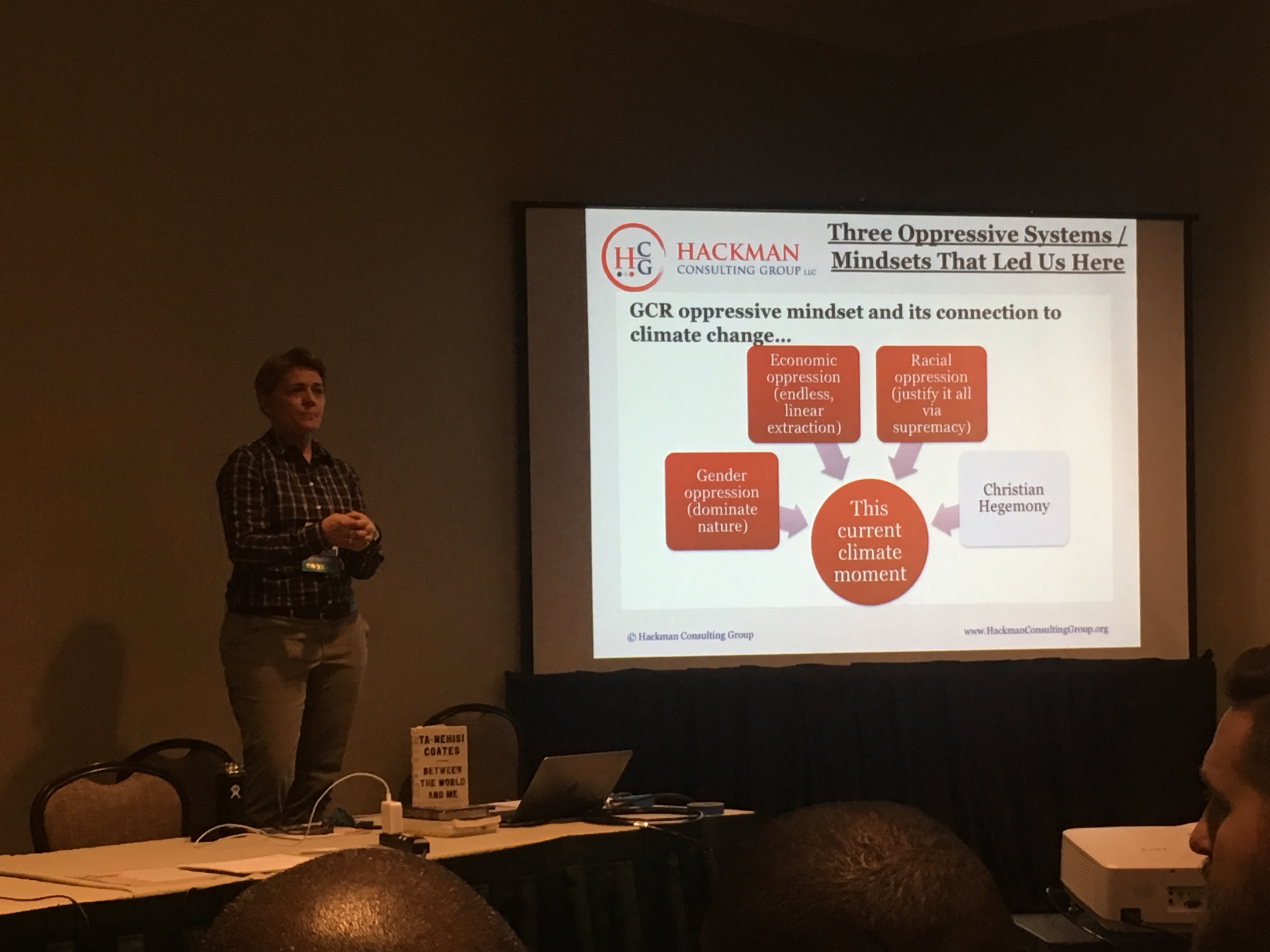 Dr. Heather W. Hackman from Hackman Consulting Group is doing some really incredible work when it comes to bridging together the two worlds of sustainability and social justice. In fact, I was fortunate enough to see her at the 2017 AASHE Conference and was deeply inspired by her sessions and keynote there. She was a personal inspiration for me, as a returning student trying to figure out what to do with my life professionally speaking, she inspired me to work towards becoming more of a public speaker and presenter myself. Needless to say, I was pleased as pie that she was at NCORE. I find Hackman’s brand of presenting to be so engaging and accessible. It’s a mixed bag of nitty-gritty real talk delivered through quirky, fast paced, and raw humor that works especially well given the way she incorporates her own often awkward journey navigating the complex worlds of diversity, equity, and inclusion as a white, and therefore privileged, female presenting person in modern society. It is clear that when it comes to sustainability, she understands there is a lot of healing, reckoning, and shifting of personal perspectives needed before we are really prepared to move forward in any meaningful ways as a truly collaborative and socially just society here in America. I’m glad to see she’ll be attending AASHE 2018 coming up in the fall once again. This kind of crossover work is what we need more and more of today. 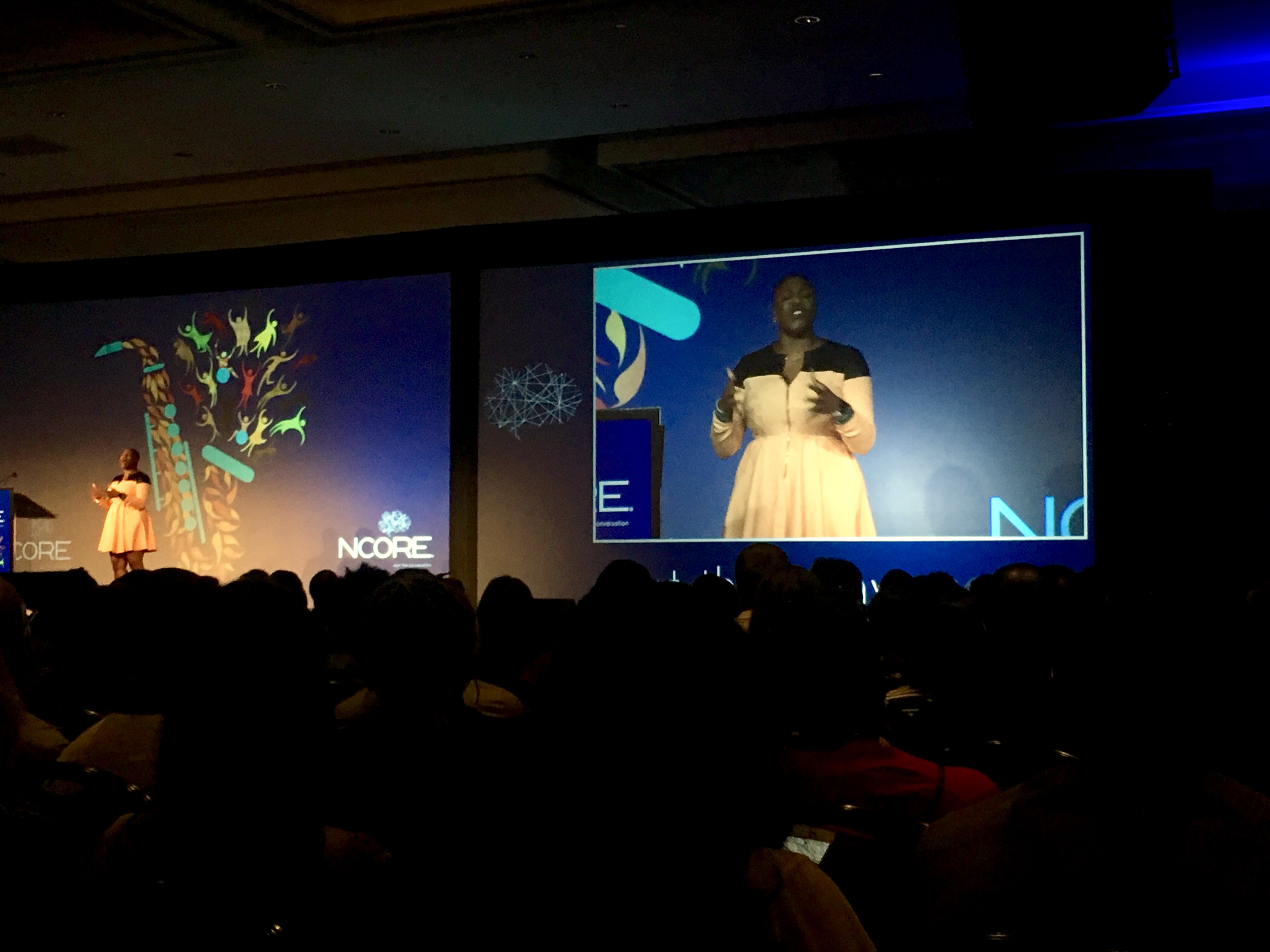 It’s no understatement to say that Symone Sanders keynote got the audience pretty fired up. Symone Sanders is a ‘spokesperson for culture’ and can be seen holding her own on CNN and other cable news programs as well as at College’s and conferences across the nation. Sanders really made her mark on the world when in 2016 she became Bernie Sanders national press secretary for his presidential campaign. Nowadays it appears one of Sanders biggest agendas is bringing an intelligent and very welcome grace back into political commentating and public discourse. Her passion and confidence radiated from the stage and inspired me to become a better listener, speaker, and debater after hearing her talk. 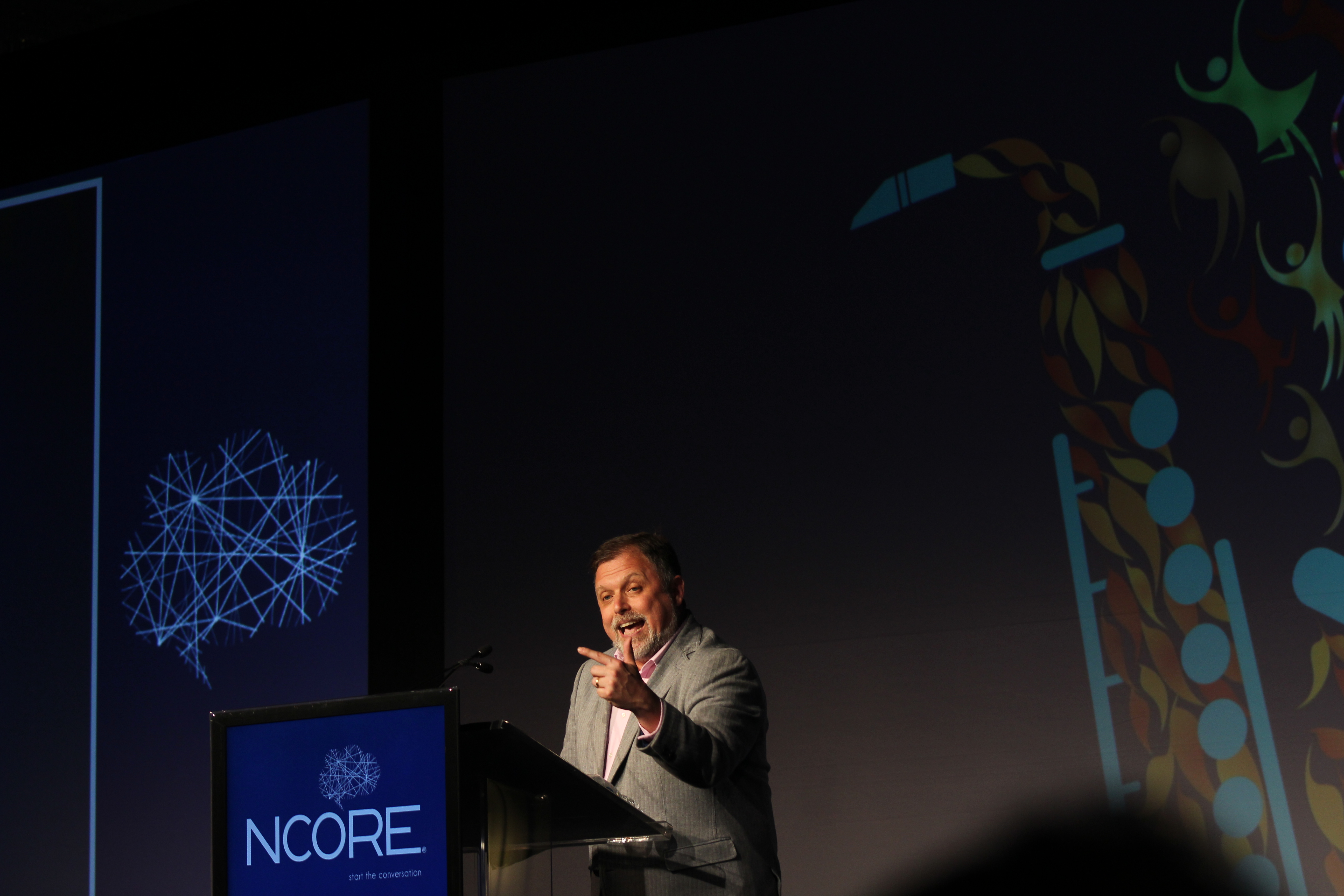 Ah, Tim Wise. What can I say? First and foremost, as a person who knew very little about him before this conference, I can now say that I’m a pretty big fan. Tim Wise is an antiracist essayist, author, and speaker who has been sharing his perspectives and wisdom on social justice for more than 20 years now. He’s recently started a podcast called “Speak Out With Tim Wise – Podcasting for Resistance and Justice in the Age of Trump”, you can imagine from the title what this program is all about and he actually recorded a couple episodes during the conference. I really enjoyed getting the opportunity to sit in on one of these interviews for his program. I actually recorded the audio of Tim’s presentation and will likely make it available on our website soon. I really appreciated his talk for it’s honesty and passion, while he didn’t really directly connect it to sustainability, the fact of the matter is he addressed a lot of issues around white privilege and elements of social justice that are intrinsically connected to the environmental sustainability movement. I strongly encourage you to have a listen to one of his podcast episodes or pick up one of his many books.

Not only was this my first time attending NCORE, it was also my first time visiting New Orleans. It’s somewhere I had always hoped to one day visit. The place is truly unlike any other place I’ve been in the US. The amount of live music (especially jazz) was really cool to experience and I managed to have some good times with fellow students and staff out there while we swam through the near 100% humidity. And while I’m not in the habit of regularly giving out grades in sustainability for a city, this place gets between an F and a C minus (if I’m being nice). Let’s just say it is certainly not the most sustainable of places I’ve ever been. I believe one could make an entire second French Quarter’s out of the Styrofoam used in one day alone out there on Bourbon Street.  In spite of that it really is such a magical place I’m glad to have seen at least once in my life. It’s bizarre having a strong feeling I’ll potentially one day be describing this place to my kids as a mythical, magical, musical, voodoo wonderland that now lives under the Gulf of Mexico. It appears the climate change and sea level rise that is already baked in makes this a likely scenario in a not too distant future. 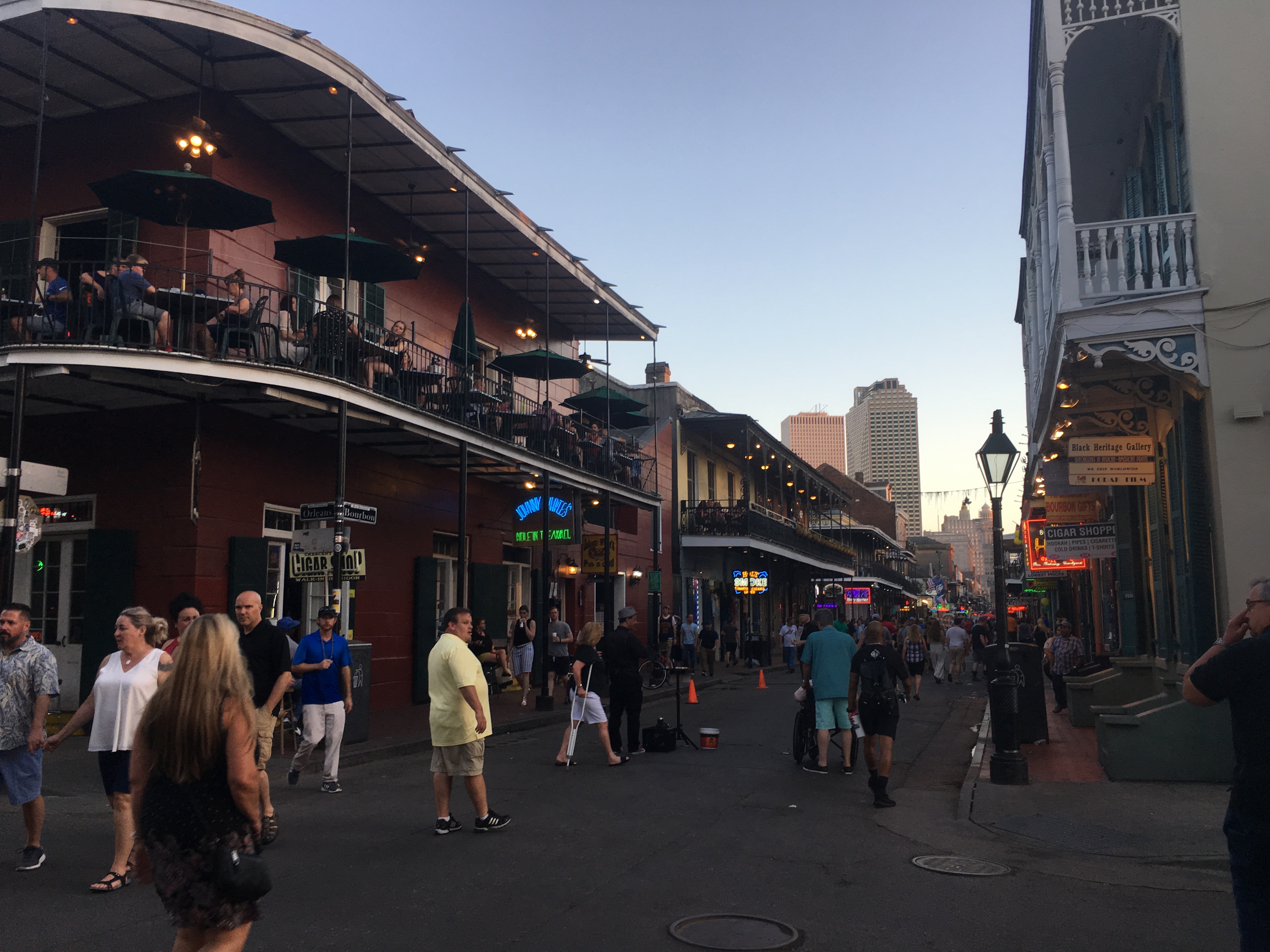 Intersection of Orleans and Bourbon, the calm before the storm 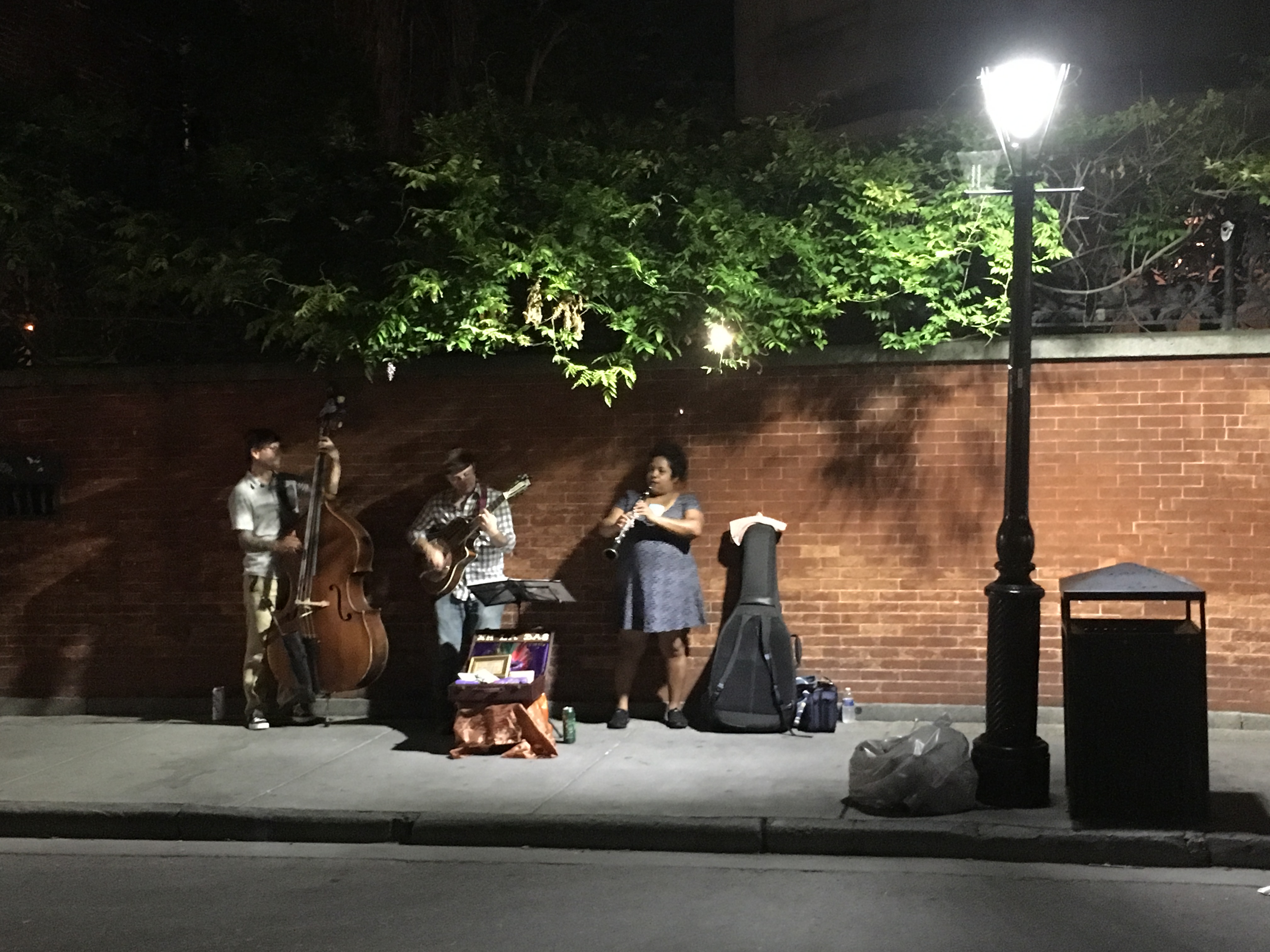 This three piece band had me hooked. I even bought a bottle of the bass players home made hot sauce! 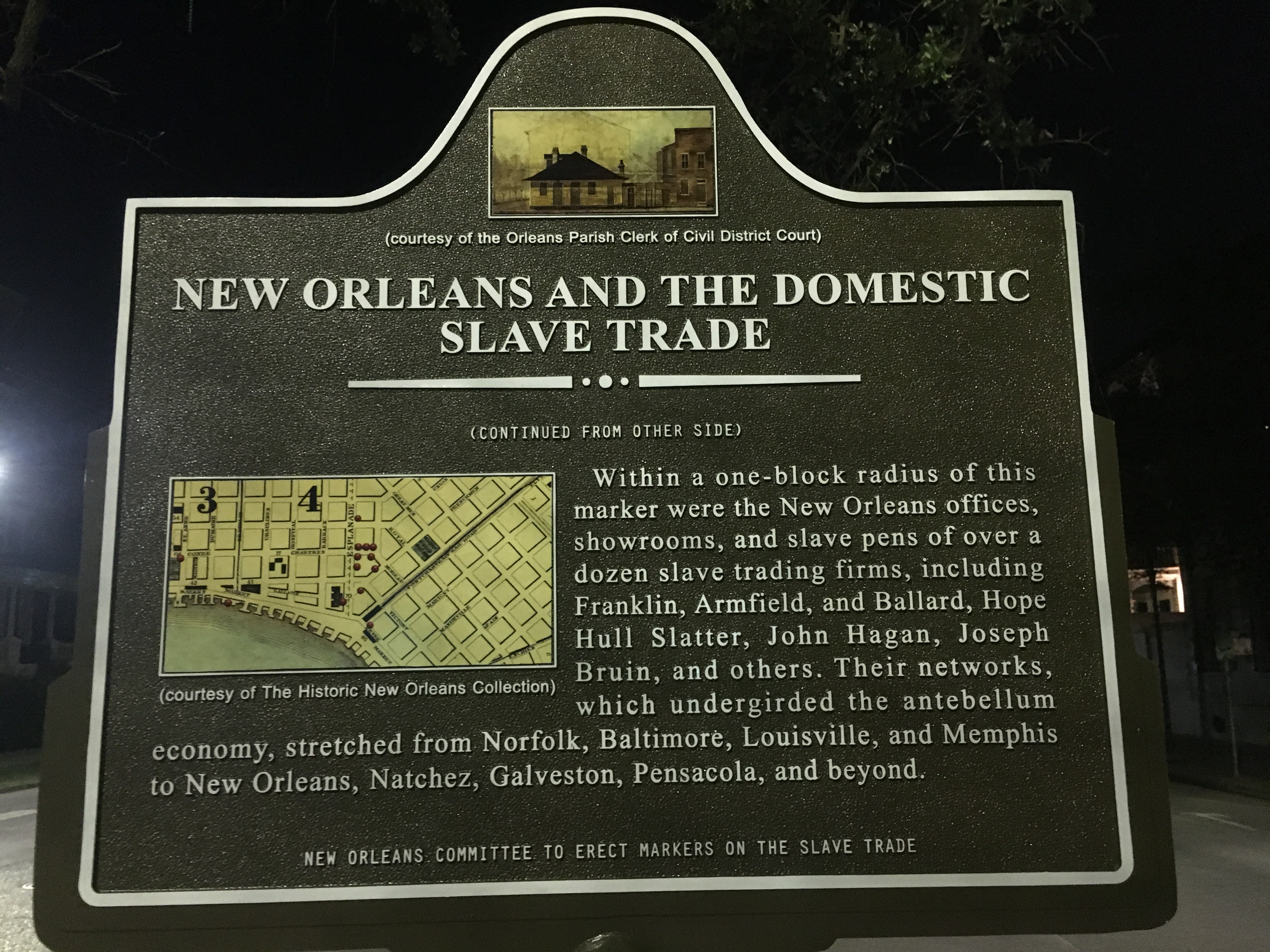 And then there are signs like these on the streets…

In all, NCORE 2018 was a humbling and incredible conference to be a part of. I hardly touched on the vast programming that took place over the 5 days of the conference, my days were packed with so many great sessions and I have a notebook stuffed with notes, I’m still trying to process it all! It was encouraging to see the great work that is being done across the country through higher education surrounding these important issues. I am also really glad to have learned that NCORE is coming to Portland next year. This gives me goals of making sure our sustainability department does more and more inclusive and equitable work between sustainability and social justice moving forward so that we can help continue to bring these two movements closer together in both higher education institutions and across American society as well. It is among the most sustainable and important work we humans can do in these often challenging times.