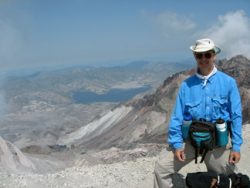 A detailed review of FAA-accredited schools led me to select PCC’s AMT program among several good alternatives. From first-tour to receipt of my licenses; PCC’s AMT faculty excelled in ways too numerous here to list. Indeed, letters of recommendation from the faculty secured my first aviation industry employment with Ameriflight.

Four years on, I continue to profit from PCC’s AMT program. Horizon Air recruited me from Ameriflight initially as an aircraft technician. I advanced next to an avionics technician spending nearly two years maintaining navigation, communications, and electrical systems of Horizon’s fleet. I’ve recently advanced again as an avionics technician with Alaska Airlines maintaining 737-400 and 737 New Generation aircraft in the fleet.

The global transportation industry, flush with employment opportunities, awaits you. To enter this field assuring success; you need only to begin with the remarkable, competent, and dedicated team teaching and mentoring all comers to PCC’s AMT program. I thank them all and wish each of you success at this time of transformation in aviation.

I’m confident that your first, best decision regarding an aviation career is selecting Portland Community College for your AMT training and licensing.

To your continued pursuit of Airworthiness,
David 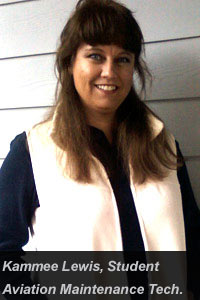 I am in the Aviation Maintenance Technology department at the PCC Rock Creek Campus. The classes are unlike any other college classes that I’ve taken. They’re very fast-paced, a whole lot of information but it’s information that your mind just soaks up and you want to know more.

A lot of the work that we do is the hands-on stuff out in the hangar, where we’re handling aircraft, many different kinds of aircraft and we get to learn and do and make mistakes and learn from our mistakes. To me, that is a very effective way for me to learn what I’m doing.

My first day was actually, we were on a break, we weren’t even in the hangar, we were all outside talking, getting to know each other and a couple of F-15’s flew overhead and as we were all talking we stopped and looked up and waited for them to pass and oohed and ahhed, and then resumed our conversation as if nothing had happened. And if I’d been talking with other people, they would have thought I was off my nut and had no idea what I was doing. But all of us were immediately in-tuned to it and at that point, I knew I’m in the right place.