The PCC AMT program can trace its roots back a long way, all the way back to 1963 evening classes at Benson High School. The classes were not certificated in those days and were offered by the Oregon Division of Continuing Education. There was only one instructor, Wes Nichols, and one aircraft, an F-84.

The classes were picked up by PCC in 1965 which is also when equipment purchasing began in earnest. In 1967 additional classes were added with the intent to create an FAA (Federal Aviation Administration) certificated program for A&P (Airframe and Powerplant) mechanics. Brad Freed was hired and became the program’s first lead instructor, a position he held until 1979. And John Lipney became the program’s first Administrative Department Chair (Division Dean) where he served for nine years. John and Brad developed the program and took it through the FAA certification process. John Lipney was extremely instrumental in initially building the program and was directly responsible for much aircraft and equipment acquisition.

In 1968 the classes were moved to the Multnomah Building (formerly Multnomah College) in downtown Portland. When the faculty and students moved into this already aging facility they had their work cut out for them. The grease and dirt had to be scraped off the floor by hand. The shops in the basement were lit by a few single light bulbs hanging from wires. But they would not be deterred, they reconditioned the building, room by room, into a completely functional training facility. 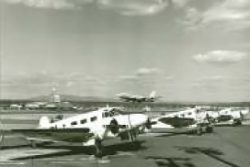 It was in 1969 when the classes received FAA Part 147 certification as an A&P Program. In that same year, the program moved out to the Air Base side of Portland International Airport (PDX), on the south ramp, building 729 (and six other smaller buildings). Building 729 was a warehouse. The other buildings were equally ill-suited for an educational facility, among them were a fire department maintenance building, a small air terminal, a maintenance shop building, and a vehicle motor pool building. So, once again the faculty demonstrated flexibility and determination and adapted to a facility that was not designed for instructional purposes. The facility was however adjacent to the runways of PDX which made acquiring aircraft easier and fostered good relationships with the other airport tenants.

In those “olden golden” days the program was one of the college’s largest “premiere” technical programs and boasted of having three Beechcraft Model 18 (Air Force C-45) aircraft in its inventory which were obtained as government surplus in 1969. These conventional landing gear aircraft had Pratt & Whitney R-985 twin radial engines and could seat five passengers and two crewmen. In the mid-1970s, the program took possession of a Cessna 305A (also called an L-19 “Bird Dog” by the military). The Bird Dog was a government surplus aircraft and formally belonged to the Oregon Army National Guard.

Seven helicopters were added to the aircraft inventory in 1974/5. Three of them were Hiller UH-12 models (OH-23 military designation) which were former U.S. Army and were obtained as government surplus. Four others were Bell 47 (OH-13E military), former U.S. Army. An eighth helicopter was added in 1978, a Bell 47-G2 (OH-13H military) which was obtained from the Oregon State Forestry Service. One of the Hillers, (UH 12B) followed one of the AMT program instructors around, Harry Day, throughout his various aviation careers. The same helicopter was with him when he was in the U.S. Army in 1957, it was also with him when he was in the Army National Guard in 1959, and it has been with him for his 30+ years with PCC. (Talk about strange and interesting facts!) Harry also served as a department chair for twelve years and did much to build the program and increase the aircraft inventory. Subsequent department chairs for the AMT program, who have provided their own investment into the AMT program were Phil Seichen, Steve Phillips and Marshall Pryor. The current program leader is Tom Laxson, himself a graduate of the PCC AMT program following a decade of experience in the commercial aviation maintenance and training.

It was in the fall of 1979 the program was moved to its current location at Rock Creek. However, the hangar wasn’t quite built yet so classes were taught in a variety of places in Buildings 1, 2 & 3 and anywhere else that space was available. The aircraft weighing lesson of the Applied Math course and various other shop classes were conducted in the Red Barn at the Rock Creek Farm. Aircraft Systems and other classes were taught in an old gutted out trailer next to the barn. The Turbine Engines class was taught behind the stage in Building 3. In the summer of 1980, the hangar (Building 6) was finished and classes moved into it. In 1983 the aviation paint booth was completed as part of Building 2. The program grew so large that the Rock Creek aviation facilities couldn’t accommodate all of it anymore. Classes were again being taught in four different buildings and even that wasn’t enough room. In 1990, several courses and supporting aircraft and equipment were temporarily re-located to the Scappoose Airport in Columbia County until a second hangar facility was constructed in 1992 that included proper offices for the instructors, a tool room, three more classrooms and space for a computer lab. 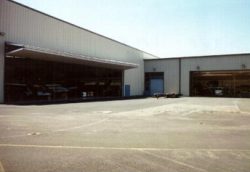 Today, there is only one Beech 18 left, and a variety of newer aircraft have been added. In 1979, a Piper Tomahawk (PA-38) was donated to the program. The aircraft had been involved in a wreck and was restored by students. In 1982 the program obtained a Beechcraft Queen Air Model 65 from the Department of the Interior. The Queen Air was used by the US Geological Survey for mineral surveys in the Rocky Mountains. 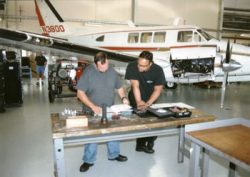 The Queen Air is a twin-engine aircraft with electrically-retractable landing gear. In 1983 a Cessna 150M was purchased on the open market when prices were depressed. This popular high-wing bird is a great example of traditional general aviation aircraft. In the mid-’80s, the program obtained a Piper Cherokee PA-38 (structure only) as a donation from Mike Schrader. In the late ’80s, a Piper Cheyenne PA-31T (structure only) was also donated. The Cheyenne had been involved in a wreck and was beyond economical repair. A Cessna P-337 Skymaster was purchased in 1988. The Skymaster has hydraulically retractable landing gear, a pressurized cabin, and is unique with its twin pusher/puller engines. In 1990 a Turbo – Aero Commander 680T was obtained from a broker in Florida as a (former government) seized aircraft. The Aero Commander has twin turboprop engines, a pressurized cabin, and hydraulically retracted landing gear. 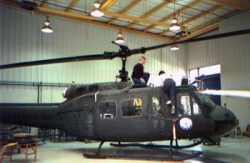 A major gain for the program’s helicopter inventory took place in 1994 when it obtained a “Huey”, Bell UH-1H. This turbine-powered helicopter was obtained from government surplus and was formerly used by the Army National Guard. Every kid that visits the hangar just has to sit in the Huey (a few adults too)! In 1996, the program obtained a Cessna 310Q as a very generous donation by Dr. John G. and Esther Roth. The C-310 is a twin-engine aircraft with electrically retractable landing gear, fuel-injected engines, and a complete avionics package. The Roths later donated a number of other aviation items to the program. In 1997 a McDonnell Douglas/Hughes 500 (OH-6A military) became the latest addition to the helicopter inventory. It came to us through the Oregon State Surplus Property Department and was formerly used by the FBI. It has an Allison 250 turboshaft engine, complete instrumentation, and operating systems.

The AMT Department is always on the lookout for new training aids and especially – new aircraft. If you know of any potential donations, please let us know.