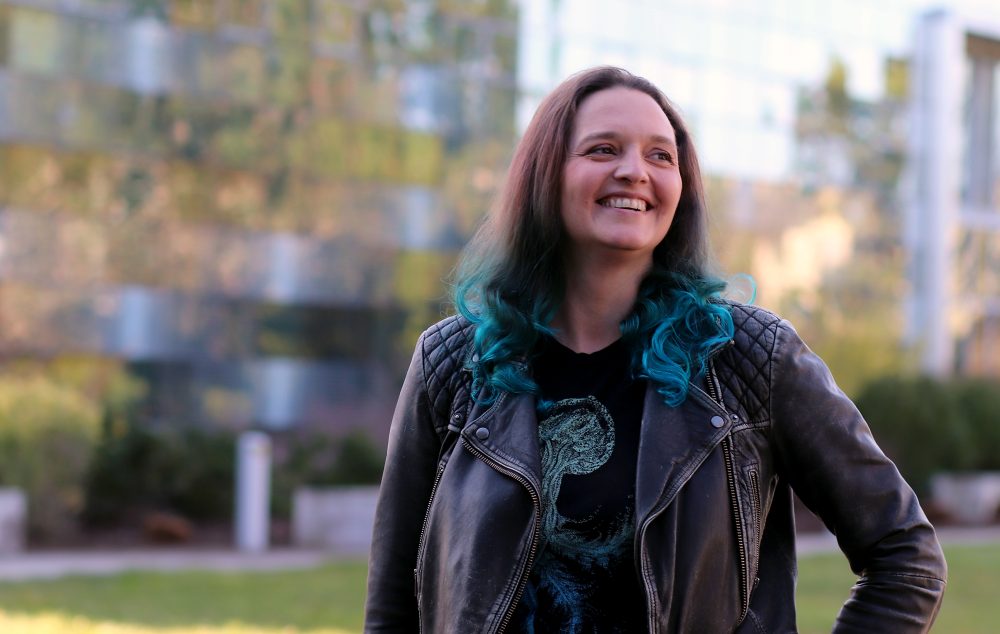 Sienna Cenere is a scientific artist. In her studio in North Portland, her artwork may look like a pointillism drawing, but up close one can see that her marks are all numbers or scientific equations drawn meticulously by hand.

Her pieces, which feature micron pen on watercolor wash, or hand engravings on scratchboard, wood or copper, can take upwards of 100 hours to draw and usually a month to a year of research. The data is pulled from Cenere’s independent research and is selected to tell the scientific story of the subject. For example, she drew a human heart with cardiac equations like stroke volume, cardiac output and ejection fraction.

“I see math as a way of describing and engaging with the world,” she said. “To me, data are not stagnant numbers on the page, but more like notes to a song. They are an active part of our lives and our world. Much of my work is made in an effort to show people that math and science are living parts of our lives and that it is all much more relatable and relevant to us than we may think.” 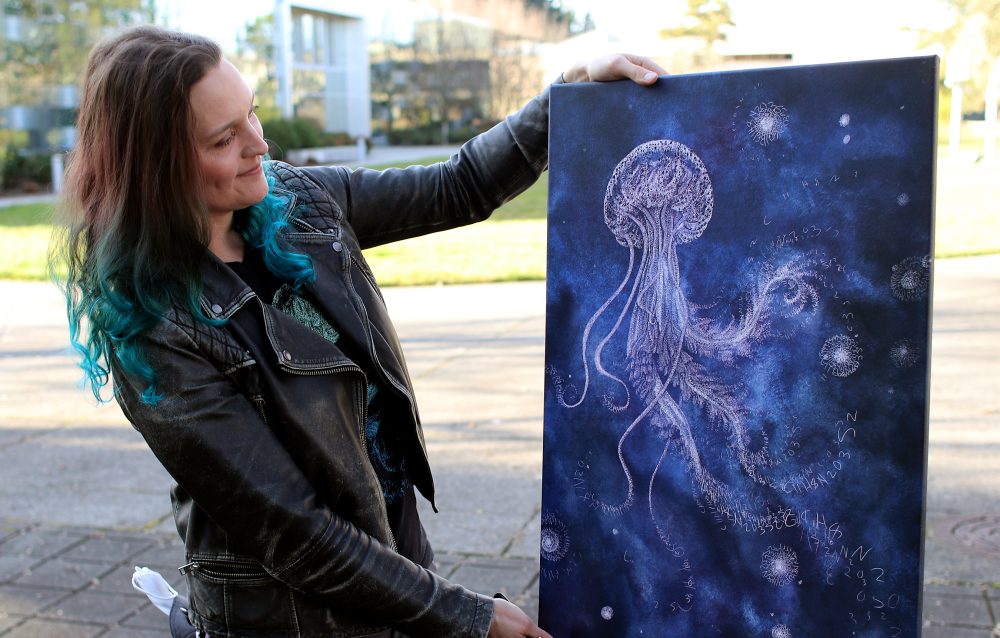 Cenere, who up until recently was self taught in art and science, developed her unique approach out of necessity. She started drawing numbers as a form of meditation after losing her financial stability in the economic downturn of 2007-09.

“I felt overwhelmed with regret and uncertainty,” Cenere said. “To cope with the anxiety, I started drawing precious moments in time with the numbers of clocks and illustrated them like scattered dust. These drawings were meditative to create and soothing to reflect on.”

A few years later, the artist started drawing with scientific data as a way to process and remember scientific concepts she had recently learned and to foster a more positive relationship with math. From there, she began to fall in love with the biological sciences as she shared her innovative artwork with the public, generating interest and intrigue.

“Sienna’s work as a professional artist lets her bring a completely different lens to the study of science,” said Linda Fergusson-Kolmes, who teaches biology. “She has worked with a variety of scientists to learn techniques and to help communicate their scientific results to the public. Sienna has an intense curiosity, a penetratingly analytical mind and a phenomenal drive to push herself to the next level.” 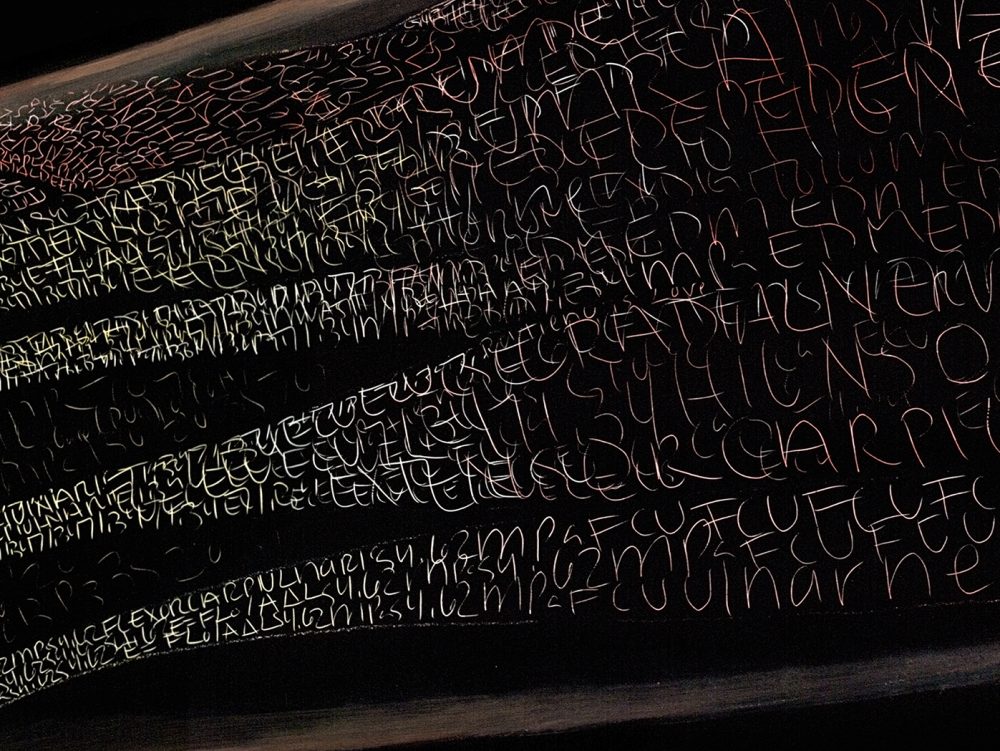 Because her artwork has a strong foundation and interest in math and science, she enrolled at Portland Community College to earn credits toward her bachelor’s degree in biology and psychology. It had been 15 years since she was last in school so the process felt daunting, she said.

Math is at the core of her artwork but for much of her life she thought she was either bad at it or just disliked doing it. And as it turns out, Cenere discovered she loved math once instructors provided support and guidance, breaking down problems and building her confidence in solving equations. 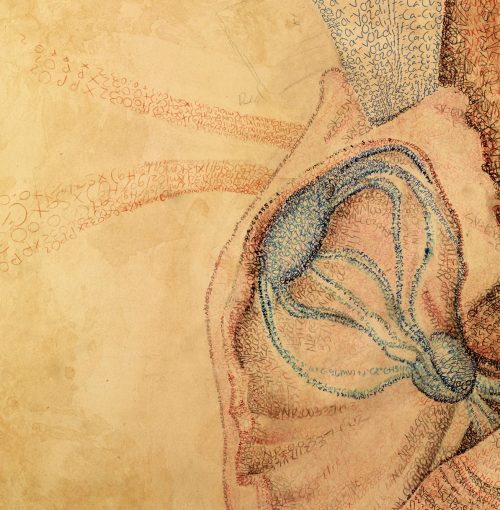 Detail of the human heart.

“Math posed my greatest challenge,” she admits. “I did not do well in math classes in high school and the idea that I was ‘bad at math’ was reinforced in my community and broader culture. Since I have overcome that hurdle, I can tell you that the  best part of math is the satisfaction of a completed problem. There’s nothing quite like it.”

For Cenere, whose strong interest in the brain and biology led to working on important mental health projects with NW Noggin, her support structure has been strong at PCC. Beyond the support she received in her math and biology classes, the Southern California native earned a PCC Foundation scholarship to help defray the cost of her classes. In addition, staff from the Women’s Resource Center helped her navigate college resources.

“As a 38-year-old professional artist studying science as a first-generation college student, I expected to feel like an outsider at PCC, but I never really have,” Cenere said. “There are so many pathways to a degree. The staff at PCC are generally eager to help us, and there are so many resources available at our disposal.”