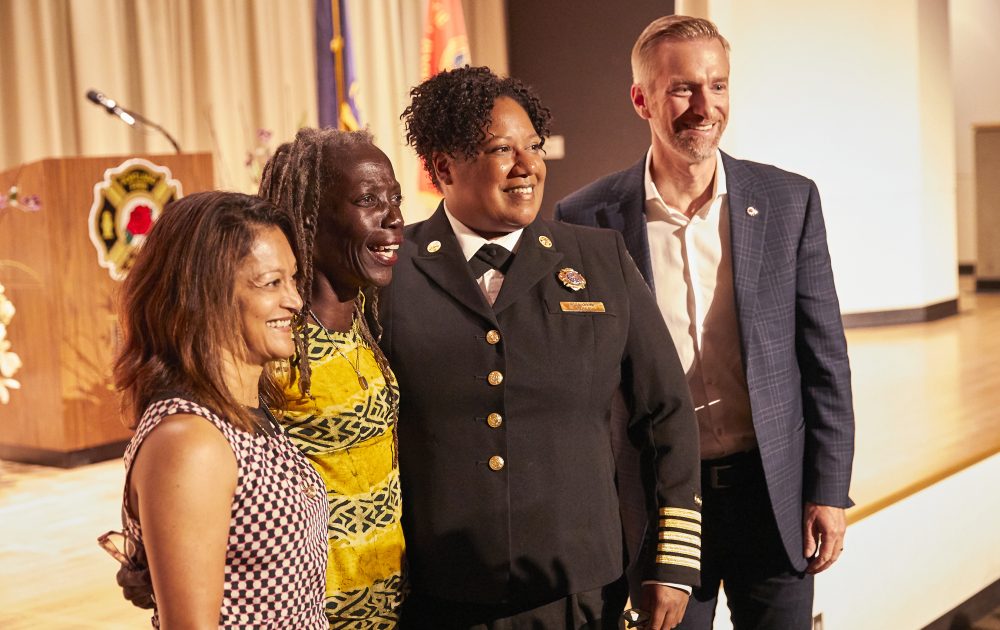 When she was a young student at Portland Community College, Sara Boone had an important revelation. She was studying to be a youth sports coach at the time, hoping to make a difference in her community.

However, Boone realized that she could make a bigger impact elsewhere. Today, as Portland’s first African American fire chief, she is positioned to do just that.

Last summer, she was officially sworn in to her new role as Portland’s Fire Chief during a ceremony in the Moriarty Auditorium at PCC’s Cascade Campus. The North Portland campus is home to the college’s Fire Protection Technology Program, where the firefighters of tomorrow learn their craft. PCC student firefighters joined their professional counterparts and a host of well-wishers to celebrate Boone’s promotion. 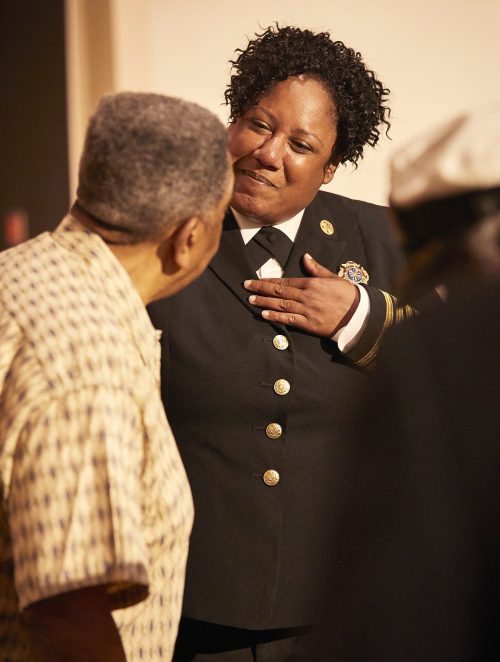 After attending PCC, Boone went on to earn a degree in Education from Boise State University.

“My position is not a position of power, but a platform of support,” Chief Boone said at the ceremony. “It is imperative that Portland Fire & Rescue evolve from a place of reactionary emergency response alone to one where preventative community health is a critical component of our bureau’s overall mission.”

Boone’s elevation to the top position in the Portland Fire Bureau caps off a distinguished 24-year career in which she registered a series of “firsts” for the city. She became Portland’s first African American woman firefighter in 1995, and the city’s first African American battalion chief in 2014. She has also served as the bureau’s safety chief, deputy chief of logistics and division chief of medical services and training.

With her promotion, Portland now has a black woman at the head of its two principal emergency response agencies: Boone at the Fire Bureau and Chief Danielle Outlaw at the Police Bureau.

Boone’s appointment was the doing of City Commissioner JoAnn Hardesty, who oversees the Fire Bureau. It helped to fulfill two of Hardesty’s long-standing priorities: promoting from within and living up to the city’s commitment to uplifting members of traditionally underrepresented communities.

“When I was tasked with hiring the new fire chief, I was absolutely convinced that they already worked for the City of Portland, that they were already part of the Fire Bureau,” Hardesty said. “Sara Boone and I are going to work together to make sure we have the best men and women serving this community.”

After attending PCC, Boone went on to earn a degree in Education from Boise State University. She returned to Portland to pursue a career in education, but a chance encounter with a firefighter from the Portland Fire Bureau changed her career trajectory that has led to the important role she has today.

There are 2 comment for this article. If you see something that doesn't belong, please click the x and report it.

x by Belinda Callahan 4 months ago

After learning of the appointment of Fire Chief Boone I am extremely pleased. It is gratifying to see people receive recognition for their hard work. Sometimes the obvious does need to be stated: every individual should have the same opportunities available and be judged with the same standards. We can all feel good when hardworking and civic minded leaders are recognized. Witnessing Chief Boone achieve her position is a historical event that makes me proud of my home town. I think we are headed in the right direction.

x by Brad Pittendrigh 4 months ago

Congratulations to Portland’s Fire Chief Sara Boone. I think it’s long over due that a woman is In charge of the duties of The Portland Fire Bureau.
I had the honor of coming down from Canada to Atten the Fire Science Program & experienced 1st hand , what a wonderful Program Portland Community College offers to Individuals with aspirations to be a Firefighter.
Congratulations Chief Boone from Canada Firefighters Nation wide are very Proud of you accomplishment.
Brad Pittendrigh🇨🇦🦆

Add to the discussion

A Call to Duty