This content was published: July 16, 2018. Phone numbers, email addresses, and other information may have changed. 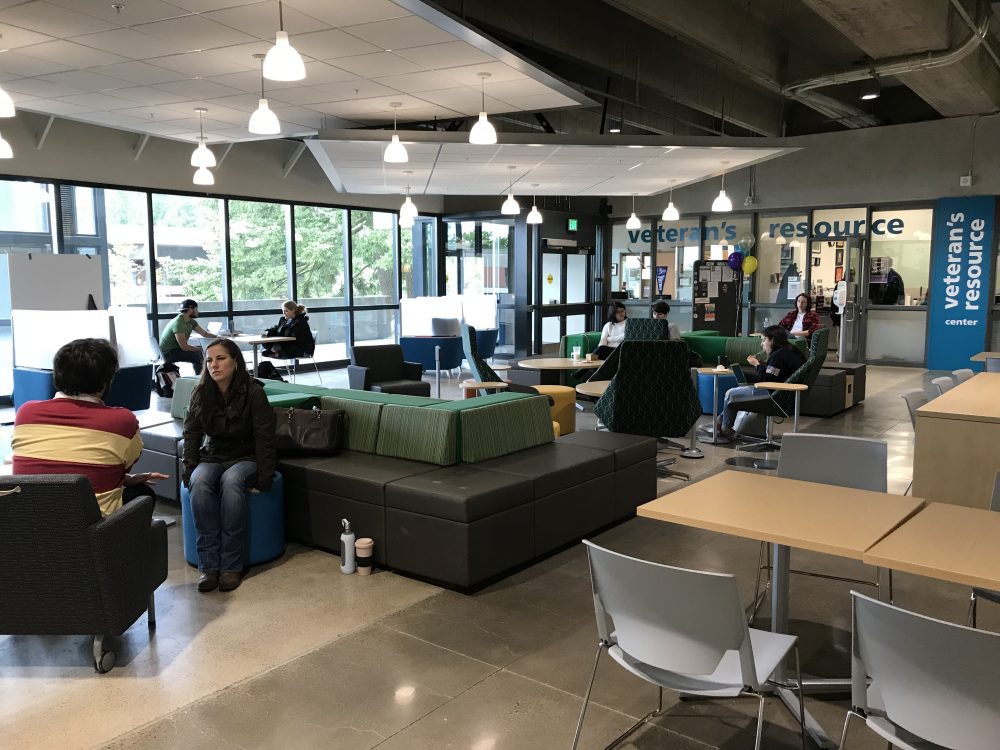 Sylvania students didn’t take long to discover the common area built by the Office of Planning & Capital Construction as part of the bond improvements in the CC Building’s Upper Mall.

The Sylvania Campus student resource centers are more resourceful than ever now that the college has completed the latest phase of the extensive improvements in the College Center building.

For the first time in the campus’ history, the resource centers for student leadership, women, veterans, and multicultural and LGBTQ+ students are located adjacent to one another — and highly visible — in the north end of CC’s Upper Mall. In addition, the new resource centers now share a large, light-filled common area for study and relaxation.

The multi-phase work being done at the CC started in 2010 and represents nearly 75 percent of the $71 million in Sylvania campus modernization funded by the 2008 voter-approved bond measure. 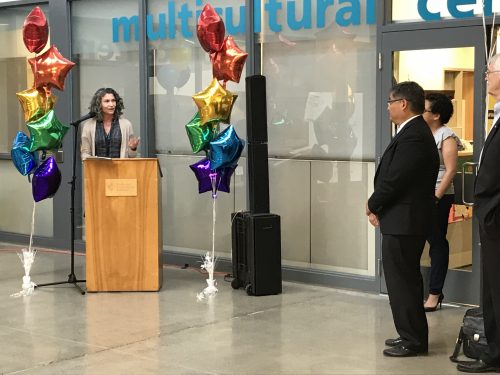 Dean of Student Success Heather Lang speaks at the grand opening of the Sylvania resource centers.

To mark this latest milestone, the college celebrated in mid-May with a “Mall Crawl,” featuring open houses at all of the resource centers, a raffle and remarks from college leaders.

Heather Lang, PCC’s dean of Student Success, said that prior to the bond work, “student resource centers were scattered throughout the building and other parts of campus. Students reported challenges in finding and accessing our services; staff lacked the adequate space for the scope of their programming and for providing confidential support; and space use was often at odds with neighboring programs.”

Now, “in just a couple weeks of being open,” Lang said the new centers already make this CC neighborhood feel like a true “student union … a buzzing hub of activity and collaboration.”

Linda Degman, director of the college’s Office of Planning & Capital Construction, noted that the building was originally constructed in 1968 in the era’s popular “brutalist,” concrete-heavy style of architecture. Not only was the building dark and — to many people — oppressive, the CC needed to upgrade seismic safety, ADA compliance and accessibility. Co-locating vital student services and resource centers was also a priority.

“This project required going deeper than design and construction,” said Degman. “GBD Architects and project manager Gary Sutton took great care to meet with CC building representatives made up of students, staff and faculty, to get feedback and input.”

Also in attendance were President Mark Mitsui, three members of PCC’s board of directors — Michael Sonnleitner, Jim Harper and Valdez Bravo — as well as representatives from GBD Architects and Howard S. Wright Construction. 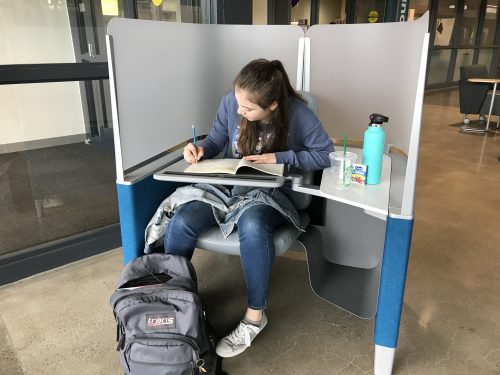 Harper, who has served PCC for more than 40 years, said that while the work in the CC was a long, slow process, “the faculty and students were very patient with all the transition. We wanted to ensure that we did it right. What impresses me now is just how nice the building is, and how proud people are — the students, the faculty, even the board members.”

During the open house, it was clear that the renovations have already had an impact. Staff at the resource centers all described an increase in foot traffic from students, as well as enhanced communication among colleagues.

“We were hidden in the basement before and hard to find,” said Mae Stephenson, coordinator of the Queer Resource Center. And now we’re right front and center, and it’s really awesome. I see the other resources centers every day now, whereas before I had to go out of my way. I can just go and ask a question instead of having to write an email. I think it’s already building a lot of closeness and connection.”

The new common area was also busy, as students enjoyed the modern, colorful seating while they talked or worked. Along the windows, four individual study pods were all occupied. Jody Giffin, PCC’s interiors and space manager, said the pods have an ergonomically designed chair, power for electronic devices, an adjustable work surface, and a three-sided opaque wall that reduces distraction while allowing students to “still feel like part of the group.”

Among the fans of the new pods is Amanda Bluhm, a second-year student studying prerequisites for a career in occupational therapy.

“I absolutely love the study tables,” she said. “They’re so comfortable … and because of the adjustable table, my neck doesn’t hurt so much when I’m looking down at books.”

Degman noted that while the college is wrapping up the remaining 2008 bond work, it’s also ramping up plans for projects associated with the 2017 voter-approved bond. This work includes modernizing Sylvania’s HT Building, constructing a new public safety building for Cascade Campus, and a childcare center at Rock Creek.

“PCC belongs to the community,” said Degman. “We have a responsibility to maintain PCC’s health and longevity so that we’re able to deliver equitable student success, educate our future workforce, and help contribute to a bright future for Oregon.”

x by STEAM student 3 years ago

Can you provide a link to where study pods can be purchased?
Thank you

x by Katherine Miller 3 years ago

Those study pods are known as Brody desks and are made by Steelcase. You can find a link to several retailers on the company’s website: https://www.steelcase.com/products/desks/brody/.