This content was published: July 10, 2017. Phone numbers, email addresses, and other information may have changed. 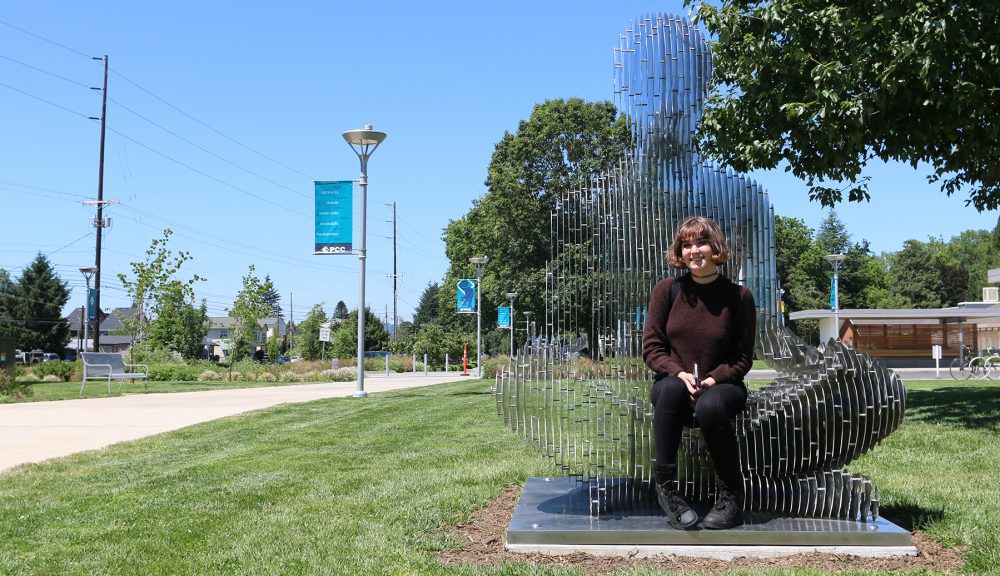 The Southeast Campus celebrated its transition from a center to a comprehensive campus in 2014 with two new buildings and extensive improvements to several others. But the final touches to this transformation were only recently finished, signaling the completion of the work that voters approved with the 2008 bond measure.

The final upgrades include new bus shelters on both sides of the main entrance off of Division Street, which give the campus the distinctive “front door” it lacked before. The shelters use natural wood, concrete and steel in strong horizontal lines that complement the dramatic modern design of the new Library and Student Commons.

Bob Smith, project manager with Scott | Edwards Architecture, said a primary challenge was that the orientation of the new buildings funneled the majority of the vehicular traffic to Division and created a “back of house” feeling to visitors upon arrival. 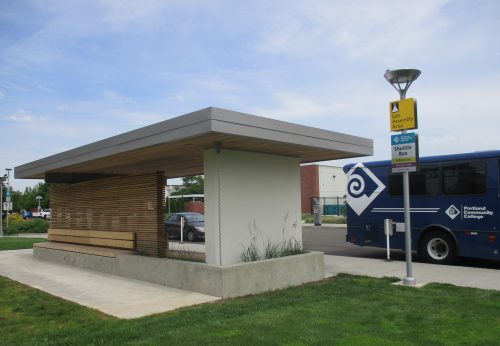 “Trash enclosures, large generators and the rear of several large buildings dominated the visual landscape, and there was no grand sense of entering the campus,” he said. “The solution was to create a series of architectural elements that not only created a sense of arrival but also helped refocus the campus face back out to the community.”

In addition to the new “gateway” bus shelters, Scott | Edwards used a similar design to create an easily identifiable entry and walkways for Community Hall Annex, and an adjacent pedestrian shelter. The annex was remodeled earlier and now houses the campus’ first childcare center, the Community Education Program, bike shop and facilities for campus and community events.

Smith said the latest bond work uses a common architectural language that weaves together older and newer segments of the campus to help create a more unified overall experience.

Another striking addition to the campus is “The Reader,” an eight-foot-tall sculpture that was recently installed on the lawn between Mt. Tabor Hall and the Library. The sculpture depicts a seated figure reading a book and is made of stainless steel slats that “disappear” when viewed straight on, providing a dramatic focal point to the campus quad.

The artist, Julian Voss-Andreae, is a German immigrant who lives in Portland, and as his model he used a PCC student who is Filipino. Because the Southeast Campus serves an area of Portland where historically a high percentage immigrants have settled, the campus’ art committee felt it was important to consider the theme of immigration in the selection of the artist.

Finally, at the southwest end of Mt. Tabor Hall, the bike parking area was greatly expanded to hold 40 new bike rings and 24 bike lockers (the latter can be reserved on a term-by-term basis).

“We have dozens of cyclists riding to campus every day, and the Cycle Center is an extraordinary resource available to anyone who needs it. … The recent expansion to the parking area was priceless,” he said. 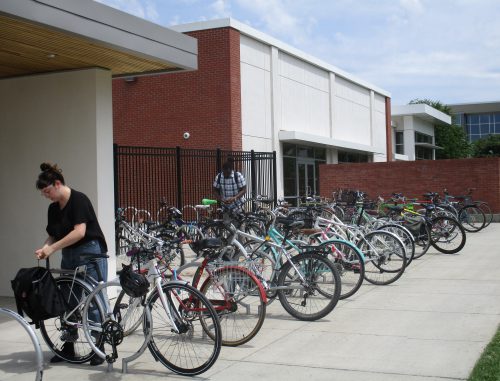 Two new bus shelters, pathways and a large pad for bike racks are the finishing touches on the 2008 bond improvements at the Southeast Campus.

PCC spent more than $49 million at the Southeast Campus, more than doubling its size and expanding class offerings so that students can complete an associate or transfer degree without having to attend another campus.

In addition to the construction of the new buildings and the remodeling work at Administration Hall, Mt. Tabor Hall and Community Hall Annex, parking facilities were expanded and retail space was created for three locally owned businesses.

Campus President Jessica Howard said the end of the bond work is a major milestone for the college’s newest campus.

“The final bond improvements at PCC Southeast have really helped establish the campus’ place in our community,” Howard said. “They have also been critical in our efforts to promote sustainability and ‘green’ transportation. I think the whole campus is thrilled to finally have fulfilled the transformation set out by the bond program and Portland voters.”

x by Tracy Rel 4 years ago

Think the statue is a wonderful piece of art and is in the perfect location.