This content was published: February 10, 2016. Phone numbers, email addresses, and other information may have changed. 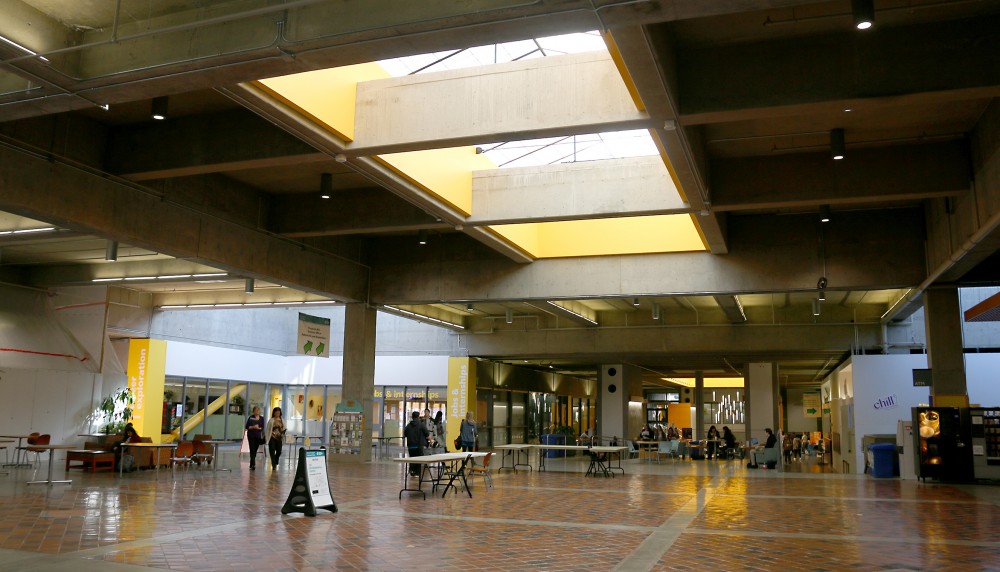 Unseasonably sunny weather arrived just as the Sylvania Campus revealed its latest improvement to the College Center: an expansive new skylight that has brightened the upper mall of the campus hub by flooding it with natural light.

The 18-by-54-foot-long skylight — part of the Phase II improvements funded by the 2008 voter-approved bond measure — was installed between the Information Desk and the East Entry and features the same vibrant yellow walls as the skylight that was added to the lower mall in Phase I.

The center was built in the late 1960s and had often been described as dark and oppressive. But the completion of both skylights has changed that.

“When they talked to the people about the kind of changes they wanted to see made, one of the things that pretty much everybody agreed with was that this space was ugly,” said Jerry Eshleman, an assistant at the Information Desk. “It was cement that was 30 to 40 years old, and it looked chunky and dark. So one of the things they wanted to do specifically was to brighten the space up and make it more inviting. And it is. The skylight has brightened up the space quite a bit.” 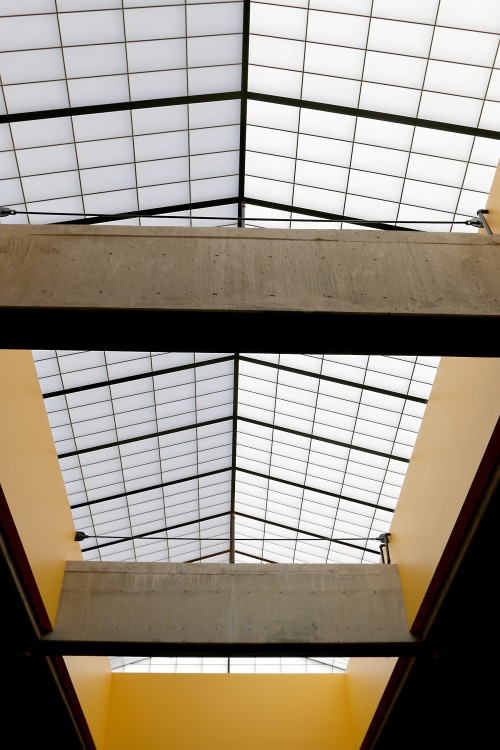 The new skylight is a Kalwall system that uses translucent panels embedded with millions of prismatic glass fibers to refract sunlight and render it diffuse and glare-free.

On the opposite side of the upper mall in Jobs & Internships, office assistant Ruslana Rozhanskaya also praised the improvement.

“We love this skylight,” said Rozhanskaya, “Before they put it in, it was gloomy, dark and gray. But now it’s more happy. And I think that creates a nicer atmosphere in the mall. People want to be here now, and it’s more welcoming.”

The new skylight is a Kalwall system that uses translucent panels embedded with millions of prismatic glass fibers to refract sunlight and render it diffuse and glare-free. The panels also reduce energy costs by controlling solar heat gain and reducing heating and cooling loads.

According to Kairy Park, project engineer with Howard S. Wright, the project was initially expected to be completed before the arrival of winter rains. However, design changes delayed completion, requiring the construction of a temporary wooden structure over the skylight to protect it from wet weather while it was finished.

In preparation for the installation, construction workers had to demolish a portion of the concrete roof. Park said that since this noisy work was done at night, the biggest challenge was sound mitigation for the surrounding neighborhood.

The temporary wooden structure was removed in early February, signaling the completion of Phase II bond work at Sylvania. Overall, the bond program is renovating about 170,000 square feet of classroom, laboratory and office space at the campus. The largest project there is the modernization of nearly 75 percent of the College Center.

During a recent lunch hour, scores of students and visitors — reading on their phones, studying or talking with friends — enjoyed the filtered sunlight that illuminated the upper mall’s many seating areas. Jessica Hughes, a first-year veterinary technician student, commented that the skylight seems to have had its intended effect.

“I think it’s really pretty,” she said. “It was really dark in here before, and it’s really nice to have natural sunlight in here, because before it was all artificial light.”

Phase III of PCC’s bond improvements are now underway and include renovating areas for student government, a multipurpose room and the college’s data and telephone services. Phase IV begins summer 2016 and will include improvements to the various student resource centers, completion of seismic and heating, ventilation and cooling work, and the creation of new student and staff lounges and a staff technology space.

The sky lights look great during daylight hours, but the upper mall is still dark at night under that sky light. Why does it not have lights and the lower mall does?

x by Katherine Miller 4 years ago

Thanks for your message. The project manager at the Sylvania Campus tells me that lights will be installed in CC’s upper mall over spring break.