This content was published: July 17, 2017. Phone numbers, email addresses, and other information may have changed. 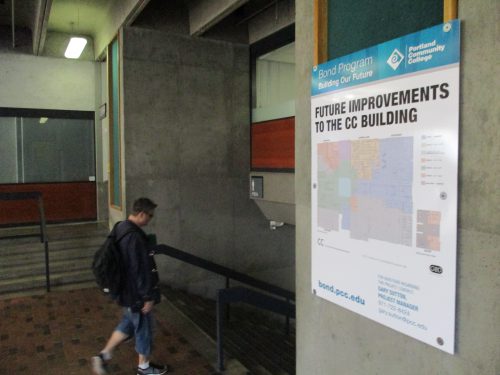 The final phase of bond improvements at the College Center begin July 2017.

This summer, the final push begins to complete the capital improvements to Sylvania Campus’ College Center (CC). Starting July 17, construction crews will demolish significant sections of concrete at the building’s north end, work that is likely to continue for three to four months. The demo work will be started early in the day to help minimize the noise impact for PCC’s neighbors.

This final phase of work at the CC, which is funded by the voter-approved 2008 bond measure, will include building new spaces for four of Sylvania’s resource centers (Multicultural, Women’s, Queer and Veterans). In addition, a student lounge and offices for student government (Associated Students of Portland Community College) will be created.

A temporary partition will be in place through March 2018 in the upper mall on the north side of the information desk. Meanwhile, the north entrance to the CC Building will be closed, as well as the bathrooms at the bottom of the stairs.

Bond-funded improvements in the CC are scheduled to be completed in May 2018.