This content was published: July 25, 2017. Phone numbers, email addresses, and other information may have changed. 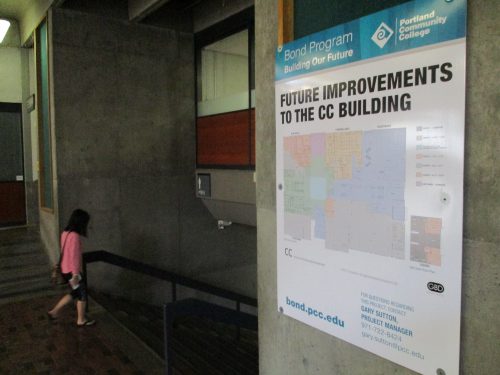 The final phase of bond improvements at the College Center begins July 2017.

The finish line is in sight for the PCC Sylvania’s biggest capital construction project: upgrading the heart and hub of the campus, Amo DeBernadis College Center.

PCC is investing $64.6 million from the 2008 voter-approved bond measure to make improvements at its largest campus. Seventy-five percent of Sylvania’s funds are for the CC building.

The work has been done in several phases to allow faculty, staff and students to move into swing space as needed in order to complete the upgrades. According to project manager Gary Sutton, the careful planning has encouraged efficiency and minimized the need for changes mid-stream, thus helping to reduce overall costs.

“The CC building has been a challenging but also very rewarding project,” he said. “From a construction standpoint, it has been difficult at times to work in an occupied building, performing various activities while still allowing the college to perform daily operations with minimal impacts.”

In the CC, as throughout the campus, the major goals of the bond program have been to enhance the student experience while improving ADA accessibility, seismic safety and environmental aspects of the Sylvania Campus. In the CC, this work included removing stairs, columns and other obstacles, and adding an elevator to the building’s north end as well as extended ramps. The result is that students can now more easily make their way from the south end of the campus to the north end.

Sutton said safety is at the forefront of the bond improvements.

“The safety component is crucial to ensure that the CC meets all necessary codes and compliances,” he said. “This approach has applied to all bond work, as well as projects that haven’t been part of the initial construction plans.” These additional projects, he noted, were made possible in part by the efficiencies achieved with the initial bond work.

The CC’s bond improvements, which have been designed by GBD Architects and constructed by Howard S. Wright, should be completed by May 2018. But for campus President Lisa Avery, the changes already have made a significant impact on Sylvania’s community of students, faculty and staff.

“The CC Building is the heart of the Sylvania Campus, and we wanted it to reflect the services that students need outside of the classroom,” said Avery. “That’s why I am thrilled with the direction of the building and the student-facing services that will be easily accessible to all of our students. We are here to serve our students and I think the new upgrades will make the College Center a better resource for them, while also creating a more welcoming campus environment.”