This content was published: October 30, 2015. Phone numbers, email addresses, and other information may have changed. 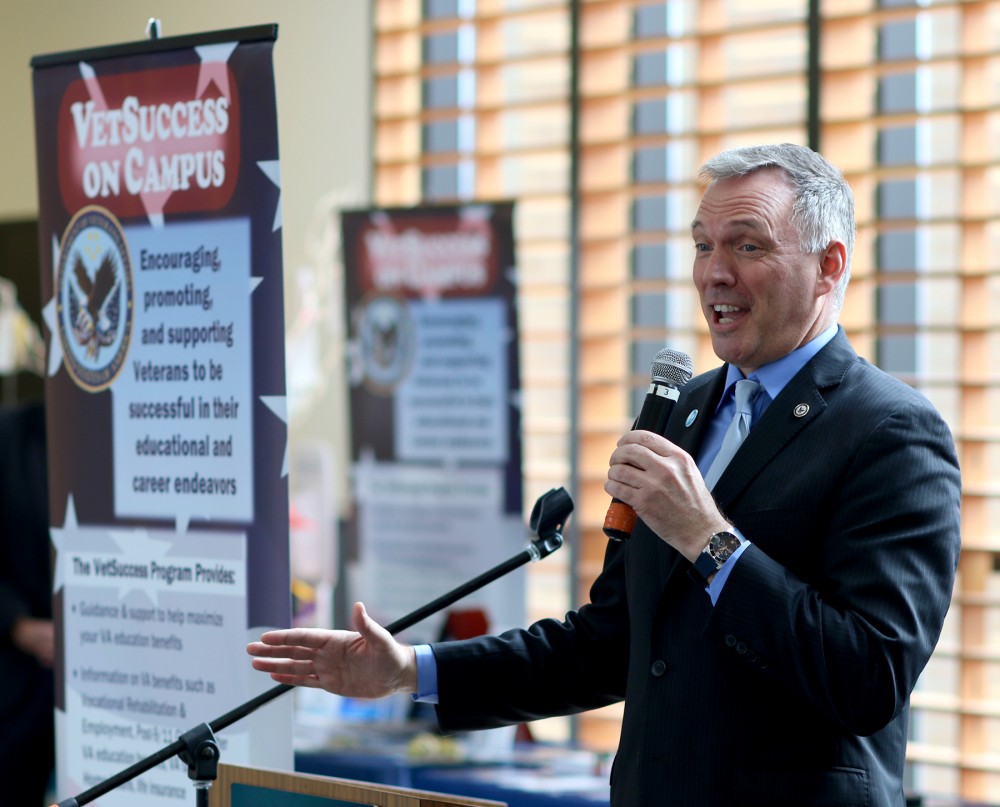 Portland Community College paid tribute to its student veterans on Oct. 29 with an open house at the Cascade Campus for the VA’s VetSuccess on Campus (VSOC) Program. The event honored the service of student veterans and highlighted the many support services PCC has available to current and former members of the armed services.

Cascade Campus President Karin Edwards offered remarks to kick off the proceedings, as did Will Streitberger, director of the U.S. Dept. of Veterans Affairs’ regional office for Oregon and Alaska.

“In honor of all the student veterans with whom I have worked over the years, I arrived 15 minutes early today,” Edwards joked.

Streitberger took the opportunity to officially name Steven Gordon, the VSOC counselor for PCC, as VSOC Counselor of the Year for the entire U.S. Dept. of Veterans’ Affairs.

“VSOC is a great partnership between the VA and PCC to ensure that student veterans and their dependents receive all the benefits and resources available to them,” Gordon said before the open house. “We are often able to connect students with benefits that they don’t know they’re entitled to. It has been a win-win for all involved.”

In 2013, PCC was selected as one of 93 colleges and universities nationwide to participate in the U.S. Department of Veterans Affairs’ VetSuccess on Campus Program. PCC, which has more than 1,800 military vets on its campuses and one of only a handful of community colleges participating, was chosen for this program because of the services it has created, the size of its student veteran population and its proximity to a number of veteran resources located throughout the Portland area.

PCC has full-service centers at the Rock Creek and Sylvania campuses that offer military veterans a safe space for relaxing between classes and socializing with fellow vets. At the Cascade and Southeast campuses there is space for veterans to meet with resource specialists, including connecting with Gordon, the VA’s VSOC representative based at PCC.

The Cascade open house event also featured two unique exhibits: “War Ink,” a surprisingly intimate collection of photographs of service members’ tattoos; as well as the “Remembrance Rug,” a handmade tapestry composed of more than 9,000 symbols, each of which represents a specific person. None of the people memorialized on the Remembrance Rug are included in any existing war monuments or memorials.

To learn more about VSOC, contact Steven Gordon at steven.gordon@pcc.edu or visit https://www.pcc.edu/resources/veterans/.

x by Rodger Asai 7 years ago

In the portion of the story about the Remembrance Rug – the word “None” should be “Many…not.”. As in:

“Many of the people memorialized on the Remembrance Rug are not included in any existing war monuments or memorials.”

There are already various virtual (on-line) memorials for many. Much of the source material for the Rug comes from these. While the rug exists physically and can be held, touched, stroked – it is just one more type of Memorial that includes many that do not happen to meet the criteria of most virtual ones.

It simply endeavors to be inclusive.

x by Steve Gordon 7 years ago

Thank you Rodger Asai for bringing The Remembrance Rug to PCC Cascade Campus for the VetSuccess on Campus (VSOC) Open House, and to Rock Creek Campus on November 9th and Southeast Campus on the 10th and 12th as part of PCC’s Veterans Week Tributes. It’s very powerful and thanks to you has now been seen at all four PCC Campuses!

I’d also like to thank Cascade Multimedia/Dragon Wehr Productions’ Keith Shuman for showing the Voices of Veterans video (vignettes by PCC Vets about their time in the US Military), and Stephanie Cornes of the Rock Creek Veterans Resource Center for bringing War Ink to the Cascade VSOC Open House.