This content was published: September 28, 2015. Phone numbers, email addresses, and other information may have changed. 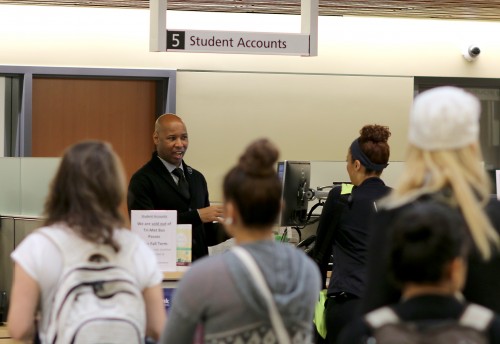 PCC’s Answer Centers, where students can get help from Enrollment Services, Financial Aid and Student Accounts, will be popular during the first few weeks of the new school year.

The 2015-16 year isn’t just any old year, but one that symbolizes a changing landscape for how students pay for college, how they and staff get to the college’s numerous locations, a huge federal investment in some of PCC’s key programs and a rebirth of a beloved sport. That’s on top of the many other great classes, services and campus life that will greet students and staff as the new term and year gets rolling.

“The very best thing about September is that it’s the beginning of a new school year,” said PCC Interim President Sylvia Kelley. “This month is always about fresh starts and endless possibilities. I have been in higher education for more than 25 years and have never known a place where the faculty and staff are so committed to their work and the students they serve.”

Check out the Panthers and programs in the spotlight as the new year begins:

In August, PCC received notice from the Northwest Commission on Colleges and Universities that the college’s accreditation has been reaffirmed on the basis of PCC’s self-study report and site visit by the agency’s accreditation team last spring. The visit was part of PCC’s year seven self-evaluation accreditation report.

“Both during their visit and in their final report, the accreditors emphasized how deeply students recognize and appreciate our commitment to their success,” Kelley added. “We should all be proud of this recognition.”

Kelley said that 2015 was the most successful legislative session ever for PCC and community colleges. It resulted in full funding of the $550 million needed for Oregon’s 17 community colleges for the 2015-17 biennium budget. In addition, the Oregon Promise bill passed into law, which offers free tuition to qualified community-college students starting in fall 2016, adding to the national proposal established by President Barack Obama.

“Whatever the details or even the limitations of these plans, they both do something profound,” Kelley said. “They have jumpstarted a new national conversation about the role of community colleges.”

Even though parking permit sales end Sept. 21 there are plenty of options of getting to any PCC campus or center. For students, PCC is offering Tri-Met bus passes for $190 per term at all PCC campuses while staff can purchase monthly passes at a discount. In addition, bicycles can be rented at the Southeast and Cascade campuses with new bike racks and lockers recently built on all campuses to assist. Not big into bikes? The free PCC Shuttle goes to all PCC campuses, centers and some neighborhoods. Zipcar and Car2Go vehicles are available and park for free on the campuses. Finally, PCC carpoolers get a discount on their parking permits. 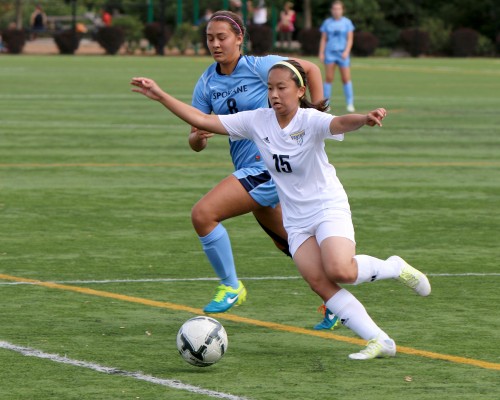 Nichola Wong, an international student from Malaysia, turns the corner on a Spokane CC defender in PCC’s first game on Sept. 1.

PCC has rebooted its intercollegiate men and women’s soccer teams, both competing in the Northwest Athletic Conference this fall. The college announced this past spring that it was bringing back soccer and held a series of tryouts in June. PCC briefly sported intercollegiate teams in the NWAC in the early 1990s and state championship club teams from the late 1960s until the early 1980s.

Portland Community College’s High School Equivalency Program at the Rock Creek Campus and the Cascade Campus TRiO Student Support Services received federal grants totaling more than $3.3 million. HEP was awarded $2.2 million while the TRiO program got $1.1 million in funding, both from the U.S. Department of Education. The grants will help the High School Equivalency Program to continue its work with migrant and seasonal farmworkers as well as members of their immediate family to obtain a general education diploma. The TRiO office will continue to increase the retention, graduation and transfer rates of academically underprepared low-income and first-generation students, and students with disabilities.

x by Rob Wagner 7 years ago

Great way to start the academic year! Also, we just had a bill signing with Governor Brown on our Aspirations to College bill – providing opportunity to expand programs like PCC Future Connect.