This content was published: May 4, 2015. Phone numbers, email addresses, and other information may have changed.

The two second-year Russian language students from the Sylvania Campus in Southwest Portland have been selected as participants of the Critical Language Scholarship Program for summer study in Vladimir, Russia. These are considered the most prestigious language scholarships in the nation for Russian. Only 50 students are selected from across the nation from a pool of about 550-700 applicants. The scholarship program covers almost all expenses including host family lodging, food, plane tickets, textbooks and visa costs. Nine PCC students have earned scholarships from this program since 2010. 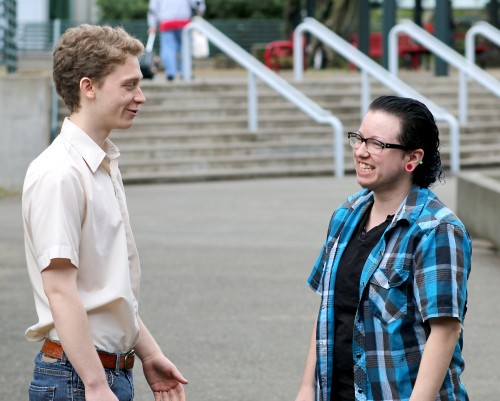 Both Riegel (left) and McQuillan plan to transfer to Portland State University’s Russian Flagship Program in the fall.

“I’m extremely proud of Chase and HadrianKyle winning this highly competitive and prestigious scholarship,” said Kristine Shmakov, the students’ Russian language instructor at PCC. “It represents their academic success and devotion to learning Russian, as well as their steadfast commitment to gaining professional proficiency for their future careers with the language. Only the top Russian students in the nation win this scholarship, and they are certainly part of that elite group.”

A program of the U.S. Department of State, Bureau of Educational and Cultural Affairs, the Critical Language Scholarship Program offers intensive summer language institutes overseas in 13 critical need foreign languages. The Russian program consists of language training with 20 hours per week of classes and a full slate of cultural events, home stays with a family and side trips to St. Petersburg and elsewhere.

“This is an incredible feat, and we’re one of the only Russian programs in the U.S. to have multiple winners in a single year,” Shmakov added. “In fact, we’ve never had just one student win it at any one time.”

Both Riegel and McQuillan plan to transfer to Portland State University’s Russian Flagship Program in the fall.

Riegel, 20, said at a young age he made it a goal to become fluent in at least one language other than English so he chose Russian and his friends steered him to PCC. He will attend classes at Portland State University and wants to work in a field where Russian-speakers are valued.

“I have always been enthralled by Russian culture and the Russian language,” said Riegel. “I would love to have a career in just about any field where I speak or use Russian on a regular basis. So, I am absolutely thrilled to be receiving the scholarship. If it wasn’t for Kristine I most likely would have not applied for this scholarship and my Russian speaking skills would be a fraction of what they are now.”

McQuillan, 26, is also studying Spanish and American Sign Language at PCC and wants to be a multilingual interpreter for a governmental organization. He said he was inspired by Russian and Ukrainian neighbors in the Woodlawn neighborhood and in Southeast Portland where he grew up.

“My interest and love for the language began at a very young age as they taught me to read their language, introduced me to cartoons from Russia, taught me basic words and sentences, and their stories were always interesting,” McQuillan said.“You could say that the love and desire to learn Russian never went away.”

Although PCC does not offer a degree in Russian, the classes are lower division collegiate courses that transfer to a four-year college or university. There are more than 140,000 Russian-speaking immigrants in Oregon and Washington. The U.S. Census indicates that the Pacific Northwest has had the greatest influx of Russian-speaking immigrants anywhere in the nation during the last decade, making Russian the most spoken language outside of English in the region.

x by Elliott 7 years ago

Congratulations…! You are both *amazing* and it’s been terrific being classmates. I hope I get at least a postcard or two :)

x by Alycia 7 years ago

Congratulations to you both! This sounds like a fantastic and exciting opportunity.

x by Maria 7 years ago

Congratulations… Hi, I’m from Russia. Now I’m studying at PCC. If you have any question, please, ask me. I’ll be happy to help.

x by Andrey Novozhilov 7 years ago

Congratulations , This has sparked my interest . I was originally born in Russia myself and was adopted . I am wanting to pick the language back up. Im so thrilled I looked at this