This content was published: March 9, 2015. Phone numbers, email addresses, and other information may have changed.

The Sylvania Campus held its first-ever “Hackathon” from Feb. 27 through March 1. Sponsored by Autodesk, Intel and PCC’s MakerSpace, the “Hackathon” was the brainchild of student Eric Thomas, who joined together teams of like-minded makers to design and build innovative products using some of the newest technology available. Creative student developers and entrepreneurs had access to tools such as 3D printers, laser cutters, Intel microcomputers, Autodesk software, soldering equipment, and even sewing machines. Mentors from the business and education worlds were there to help with ideas and give encouragement. 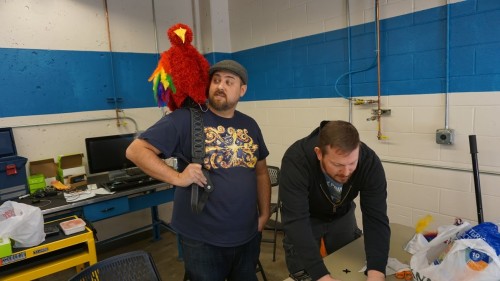 ‘Creepy Pete,’ the electronic parrot, does his creepy thing.

On the final day, teams showcased their accomplishments to professionals from the industry. The winning team was led by Blain Crabtree and Parker Snook, who developed a temperature sensor that can remotely be viewed from a smartphone. The two pitched the product as one that could save lives from heat exhaustion, like a coach checking players’ vitals, or also to help train players that are not pushing themselves enough.

Second place was given for a product called Dragon, a proximity detector for sensing unseen dangers for bicyclists, wheelchairs and other mobility devices. Dragon, which used the Intel Edison board, would typically be placed in the rear of the device to detect stationary or incoming objects.

Third place went to the team that created Ceebo+, a fun detector that would give its user secondary data like astrology and other reading, but has the potential for medical benefits. The team is working to better its product and may start a Kickstarter fund.

Fourth place went to a product called Savery, an multi-functional armband. The crowd favorite, Creepy Pete, took fifth place. “Creepy Pete” is a functional parrot who rides on the shoulders. His eyes, which are motion sensors, detect motion and turn the parrot to face the direction of that motion. All teams took home prizes, including desktop computers, tablets and gift cards. Better still, the students’ work was highlighted in a story on KOIN-TV news on Saturday, Feb 28.

x by Dorinda Gustafson 6 years ago

Congratulations on a successful event! Eric Thomas spent a considerable amount of time and effort to make this all come together. Sounds like it was enjoyed by all!

[…] a long list of happenings in the hackathon world. PCC recently hosted hackathons at Rock Creek and Sylvania campuses, organized by […]

This student is a real hack, Students needed for PCC 'Hackathon'