This content was published: March 11, 2015. Phone numbers, email addresses, and other information may have changed.

PCC student Eric Thomas proving to be an effective hack

His team, named aptly Brain Storm, recently won top prize, or Best of Show, at the Portland hackathon called “Hack to the Future” held at the Portland State University Business Accelerator. The students created “StormSafe,” which is a personal storm-warning device with real-time lightning detection within 40 kilometers and GPS-based weather alerts to keep you safe as you walk, hike, or bike. The students split a cash prize of $1,000 for creating the lightning detector.

Read all about the cool device. 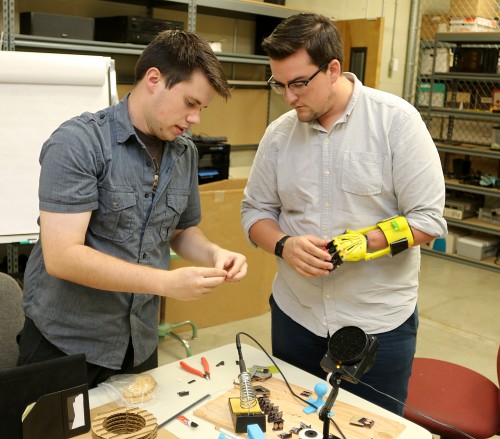 “We sold it as a protective device for industry and the general public,” Thomas said. “With enough of these devices spread out and connected through an online logger, we could triangulate the location of strikes. Users could use the data or warnings to move away from the strikes and get to safety.”

The Portland hackathon was sponsored by the online community Hackster.io, which is traveling across the country with a DeLorean made to look like the one from the film “Back to the Future.” The idea of the event was for students to hack the DeLorean. This hackathon road show will visit 10 cities around the nation. Team Brain Storm’s detector served as sort of a “flux capacitor” for the car. Thomas said the character in the film could use their lightning detector to find the needed energy (lightning bolt) to power the DeLorean.

“Although, if you are Marty McFly stuck in 1955 and you don’t have any plutonium, you are going to have to electrically procure 1.21 gigawatts,” Thomas cautioned. “With this device you could find your local lightning storm, drive into the storm, get struck, and make it ‘back to the future.’”

And not to be outdone, PCC students Nick and CJ Vandendries won the $500 second-place prize from AutoDesk for their project called Anti-Text, which deactivates the texting capabilities on cell phones when driving – another innovation by PCC students to help save lives.

Read about their Anti-Text project.

And this is just the latest news in a long list of happenings in the hackathon world. PCC recently hosted hackathons at Rock Creek and Sylvania campuses, both organized by Thomas.

But what’s in store for his future? Thomas, who is studying mechanical engineering, said he is working with Portland State and Oregon State universities, and the University of Oregon, as well as other colleges to achieve Oregon’s first educational cubesat. Cubesats are 1,000-cubic-centimeter-sized satellites that are typically launched from the International Space Station.

“NASA or another rocket would take it to the station where it would be queried for an ejection (into orbit),” Thomas said. “PCC will be able to get involved and announcements will be made when projects are available.”

x by Linda Browning 6 years ago

x by Andrea Harris 6 years ago

Your future is very bright, Eric. Keep up the good work!

x by Kay Bolke 6 years ago

We are very proud of you, Eric!

x by Josephine 6 years ago

x by Cece Cutsforth 6 years ago

What a great demonstration of PCC’s leadership in innovative solutions. Thank you for all your excellent work!

x by Valerie Clark 6 years ago

I delight in your creative project; it extends to the name Brain Storm and in the way you ran with the Back to the Future theme to locate (and, hypothetically, harness) lightening. You and your peers do PCC proud.