This content was published: April 4, 2013. Phone numbers, email addresses, and other information may have changed.

If the Oregon Legislature didn’t know about Portland Community College before, it does now.

Seven PCC students are working as interns for various state legislators in Salem this session. The internships, established by the college to give interested students experience in government, are helping to broaden their skill sets as well as build awareness of the college with state leaders. The students help the legislators in filing letters and bills, sit in on meetings with lobbyists, answer phone calls and e-mails from constituents, and handle speaking requests. It’s the first time that PCC has sponsored internships at the state Capitol Building. In return, the legislators learn about the students’ academic lives, programs they are in and the issues they face back home.

“I absolutely love this experience because I don’t just learn how the the political arena works; I get to meet with all sorts of interesting people from a wide range of professions,” said 20-year-old Patrick Stupfel, who is an intern for State Rep. Alissa Keny-Guyer. “It is a learning experience that I wouldn’t trade for the world.” 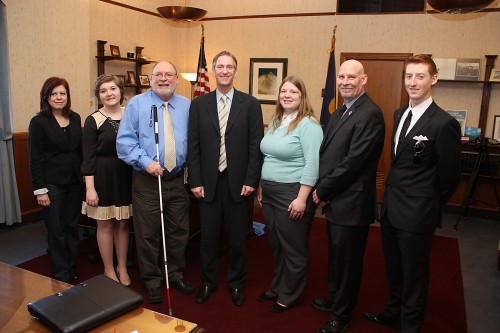 While they share an interest in political science all have backgrounds as diverse as their ages. For example, Stupfel is studying political science, law and business at the Southeast Center and Cascade Campus. He is one of the first students in the Future Connect Scholarship Program and was referred to the internship opportunity by his College Success Coach Jose Esparza.

A high school drop out in 2010 with only five high school credits as a senior, he realized he needed to change his life. Stupfel enrolled in a military high school in Bend, which gave him the high school credits he needed, but also the self confidence and motivation to return to his school district and graduate at the top of his class. He was a member of Portland Public Schools’ Superintendent’s Student Advisory Council, a group that represented students across the district and brought their views directly to PPS Superintendent Carole Smith. The PCC legislative internship was a natural path for Stupfel once he enrolled at PCC.

“I have a strong interest in government, law and public policy, so this internship has provided me with a first-rate experience that would directly relate to those fields,” Stupfel said. “Now that I am interning in the State Legislature, people that have known me for years are so proud and impressed at the personal success I continue to achieve. I will always be looking for the next opportunity to help disengaged students because I know what is is like to be at rock bottom and sometimes all it takes is someone to help pull you up.” 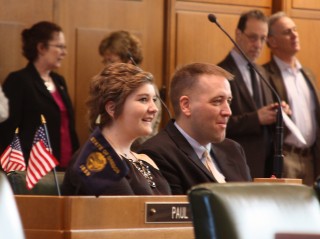 Rob Wagner, PCC’s government relations manager, campaigned for creating the internship program soon after being selected to the position last year. In his past lobbying roles, he said he’d always noticed that the state’s universities had their students in internships at the Capitol Building offices, but found no one from the community colleges. Used to lobbying outside forces on behalf of his organization, Wagner lobbied inside forces at PCC to have the internships funded for two full days a week during the term.

His lobbying worked. The student leadership coordinators at each campus supported the idea and the District Student Council agreed to fund a pilot program on a competitive basis. Based on the success of the first cohort, the Council agreed to fund a second term of the PCC Internship Program. Wagner hopes the internships will be funded for terms coinciding with legislative sessions.

He said the District Student Council put together the selection process, focusing on geographic representation (students for each of the four campuses) as well as age, gender, and a cross-section of political interests. One of the youngest is 16-year-old Grace Morlock, an energetic and enthusiastic intern for Rep. Tobias Read’s office. She is studying business administration in the Early College High School Program at the Rock Creek Campus.

“Just being in Salem and witnessing first hand how the legislative process works is amazing,” said Morlock. “My favorite part of the job is being involved in the atmosphere that the Capitol has to offer. There is never a dull moment working with Rep. Read or walking around the halls of the building. I learned that the legislators truly care and are passionate for the issues they support and defend. All of them are in the Capitol to make Oregon a better state to live in.”

x by Daniel Snegirev 9 years ago

I think it is great that there is a program at Portland Community College for internship associated with Politics. Being able to travel to Salem and possibly have your voice heard is terrific. It is a great accomplishment for an individual and an opportunity for good. There is always a demand for a good representative and or student. It is another great program to add to PCC!

x by Jennifer Boehmer 9 years ago

I completely agree Daniel! It’s really terrific and I applaud these students for engaging in this program…And coming this May 13, PCC will be hosting “PCC Day at the Capitol” which will be an opportunity for all students to come down to Salem and spend the day meeting with our legislators. Watch for information coming soon and how you can participate!

x by Narce 9 years ago

Thank you Rob for having this vision become a reality.

x by Eileen Mihich 9 years ago

Amazing! This is so wonderful and exactly why I have nothing but good things to say about PCC! It gives community college students an opportunity to really get out there and see that their hard work and progress is being contributed to a bigger societal realm. Great to see!

x by Jim Fasulo 9 years ago

Terrific program for students interested in government. This
is a great way for students who are planning
transferring to a university to get practical
and valuable experience in a profession that
will guide their study on to a bachelor’s degree.
Great story and solid work by Rob.