This content was published: September 14, 2009. Phone numbers, email addresses, and other information may have changed.

Photos by James Hill and story by Meryl Lipman. 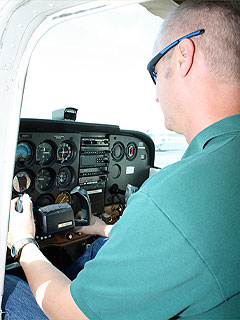 Larry Altree, Portland Community College Aviation Science instructor and the program’s chairperson, is experiencing a take off of another kind – enrollment.

Full-time equivalent enrollment in Aviation Science has more than doubled from this same time last year, skyrocketing by more than 114 percent. Altree said that many of his courses for fall are almost full.

“Interest is up,” Altree said. “With this economy as people encounter downsizing in their own industry they are thinking of investing in a career they can be passionate about rather than a career for the money. There is nothing like a layoff to wake them up that working just for money isn’t the best way to go. This fall, our beginning classes will be at capacity and we already have waiting lists.”

In addition to fixed wing aircraft, PCC partners with Hillsboro Aviation to teach helicopter aviation and graduates often get mid-level jobs flying for tour companies, fire-and-rescue operations, off-shore oil production and the timber industry. Classes are offered at the Rock Creek Campus and Southeast Center. Students can fly out of either Hillsboro Airport or Hillsboro Aviation’s facility at the Troutdale Airport near Gresham.

Altree, a third-generation pilot whose grandfather flew planes in World War I and father for commercial airlines, said Chapter 33 of the new GI Bill has funneled even more students and interest his way. He estimates about three-quarters of the calls he gets are post-9/11 vets asking about the program seeking to capitalize on the bill. 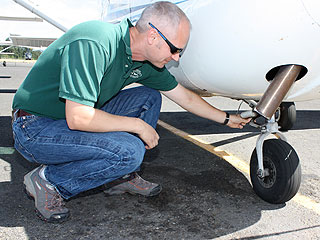 “(The new GI Bill) has had a positive impact on my enrollment; the vets are a huge part of our enrollment surge,” said Altree, the 2009 recipient of the Rock Creek Campus Gordon Galbraith Award for community service. “It covers college costs like tuition and fees; the vets are really excited about that. We offer affordable flight training across the spectrum to those who haven’t flown before and have been put into active service.”

Altree, who lives in St. Johns, sees his charge as turning out all of his graduates, whether vets or not, who are ready to be safe, competent pilots. But he doesn’t just talk the talk; he walks the walk. He hopes to spend his Galbraith award money of $1,500 to buy materials and equipment for the school’s two flight simulators to benefit his students’ learning.

“Judgment, decision making skills, attitude – that’s what will keep my students safe,” he said. “There are so many variables in flying. When an airline pilot takes off he or she has to fly in any conditions that are legal and safe. It takes extraordinary focus and discipline. The amount of responsibility that you are shouldered with is unmatched. People trust their lives and the lives of their families to airline pilots.”

Aviation Science student Kristina Guardino was recently in the news, profiled by The Oregonian.