This content was published: April 27, 2009. Phone numbers, email addresses, and other information may have changed.

It was made in Portland at a production cost of less than $32,000, all of it coming from Greg Kerr who is a Portland Community College computer applications and multimedia instructor. In addition, the film’s marketing materials and premiere were made with the help of 20 students from PCC’s Multimedia program based at the Cascade Campus. 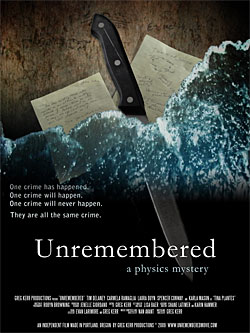 “Unremembered,” will show at Cascade Moriarty Auditorium (705 N. Killingsworth St.) on Wednesday, May 13, as part of the 22nd Art Beat Festival. There will be two free screenings of the film – a sneak preview at 1 p.m., followed by a question-and-answer session with lead actress Karla Mason and Kerr, who produced, wrote and directed the film. Another screening will be at 6:30 p.m.

The full-length motion picture (running time: 2 hours, 22 minutes) is a science fiction mystery. In the film, John Outis, played by Tim Delaney, doesn’t have a past. But his life history is being restored in the present and it’s having a dramatic effect on the people around him. As he begins to remember more, his past threatens to end his future until he receives the aid and guidance of Tina Plantes, a brilliant and unconventional physics professor. As she’s drawn deeper into the bizarre events of John’s life, she discovers a disturbing and far-reaching truth: time is not linear.

“Although I wrote the screenplay five years ago, it feels much more poignant right now,” he said. “I think if you consider the film in that context, about a person who has lost complete control of his life due to circumstances well beyond his control, you’re sure to find parallels with our everyday lives.”

The film contains adult language, violence and adult situations, in addition to complex physics concepts and philosophical ideas not found in most films.

For more on this and other events at Art Beat, visit:
www.artbeat.pcc.edu.