This content was published: May 30, 2013. Phone numbers, email addresses, and other information may have changed. 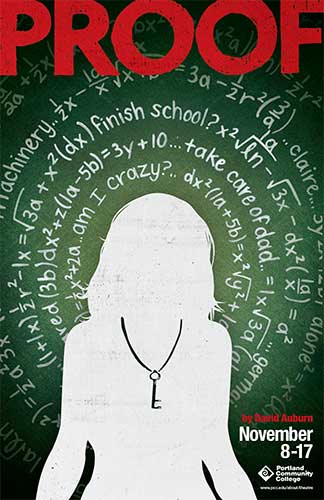 PCC Theatre AUDITIONS for the Fall 2013 production of the Pulitzer Prize winning drama by David Auburn.

Students may audition on either day, please read the play beforehand, one copy available in the PAC Greenroom. Auditions will consist of readings from the script.

Note: Students cast in the TA Fall production “Proof” will be enrolled in TA 180 (A minimum of 1 credit) during the Fall 2013 term. Rehearsals will begin the first week of the Fall term Tues Sept 24, and run weekly on Tuesdays, Wednesdays and Thursdays from 1-3pm and Fridays from 9:30 am-1pm through opening night Friday, Nov 8. (This includes Saturday Nov 2 all day Technical Rehearsal and Evening rehearsals Mon-Thurs Nov 4-7)

Students are also expected to work 10 hours in the costume or scene shop to support the building of the play.