This content was published: April 5, 2019. Phone numbers, email addresses, and other information may have changed.

On Friday, March 8th the Greater Portland Sustainability Education Network (GPSEN) hosted its signature event, The GPSEN Sustainability Symposium: “Building Bridges to Sustainability.” The event was held at Portland Community College’s Cascade Campus. The day was filled with so many valuable moments. Over 160 people attended throughout the day from 8:30 in the morning until just after 6:00 at night. There were many incredible people present at the symposium and the day was filled with valuable wisdom and education. The Symposium coincided with International Women’s Day, and women were celebrated in so many ways over the course of the day. In fact, women made up a large majority of speakers and presenters for this year’s Symposium. 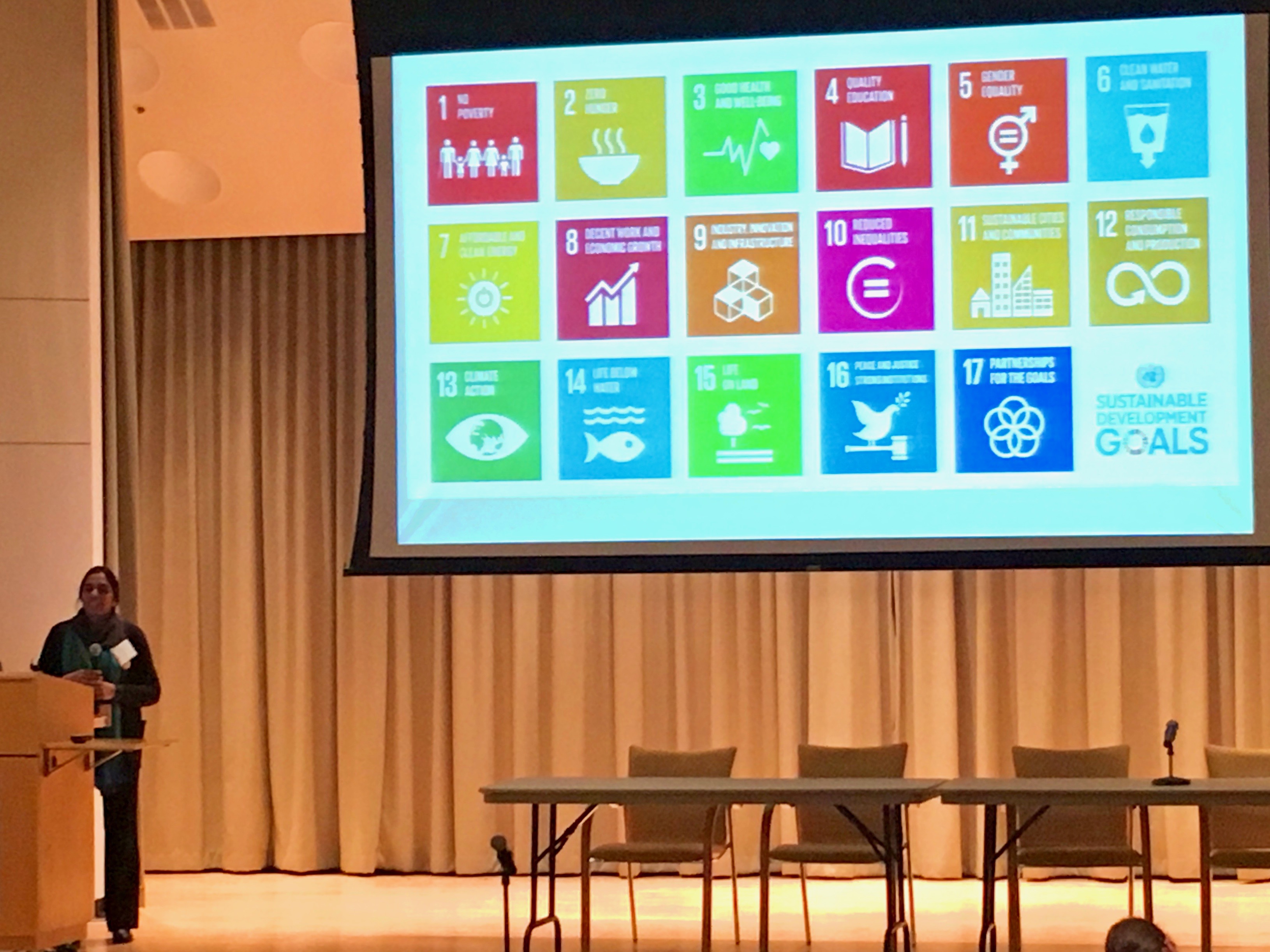 The day began with a Student Summit that had 45 students from 6 local Universities. The Student Summit was facilitated by three presenters: Haley Morris, a student at PSU and GPSEN fellow who is the lead contact for the College Network of GPSEN, as well as Serena Dressel, a graduate of PSU who is secretary on the Board of GPSEN, and myself, a student at PCC and a part of the Sustainability Department as the Communications Coordinator. Among the attendees were returning College Network members, and after this Symposium and Summit, we are pleased to now have the largest group of College Network members in GPSEN’s history!

Our opening keynote for the Symposium was Judy Bluehorse Skelton who is an assistant professor at PSU in the Indigenous Studies Program. Judy was also the recipient of this year’s GPSEN Academic Sustainability Award. Skelton’s keynote was entitled: “Reclaiming the Urban Forest for Food, Medicine & Ceremony: An Overview of Indigenous Cultural Collaborative Projects in the Portland Metro Area.” Skelton’s speech was beautiful, heartfelt, honest and valuable as she was able to address so many important issues and dynamics that are integral to the environmental movement. Perhaps the most poignant moment in her speech was when she reminded us that what today is called “sustainability” was once simply called “7 generations,” which is essentially a cultural practice centered on being mindful of the consequences our actions have on the land for future generations. She also pointed out that in native culture, places were not named after people. Skelton showed a picture of a gorge, which we call the “Columbia River,” and explained that the idea of assigning human names to land negates the autonomy of the land itself. Skelton suggested that we shift our perception of land away from that which we can own or conquer, and instead view it as something we are a part of and must honor accordingly. 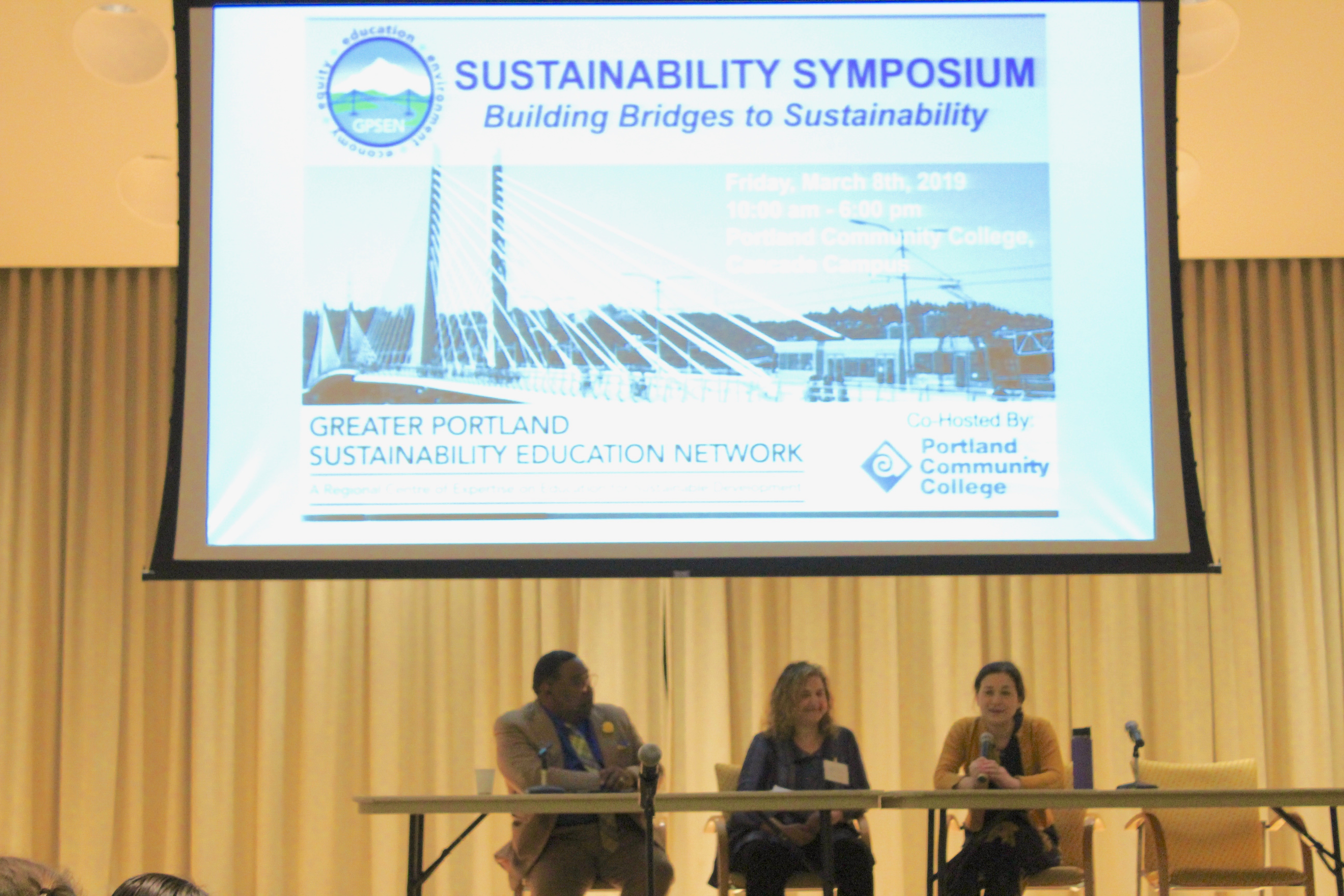 Judy Bluehorse Skelton’s keynote was followed by a panel talk with organizers from the Portland Clean Energy Initiative, which was facilitated by Jenny Lee of the Coalition of Communities of Color. Other individuals sitting on the panel were Reverand E.D. Mondaine, president of the NAACP Oregon chapter and Adriana Voss of 350PDX. This panel was inspiring as it provided insight on how to run a campaign in a coalition style that is non-hierarchical. Most importantly, the panel was conducted through the lense of racial justice. It was eye-opening to piece together a model for dynamic leadership that isn’t tainted by capitalism and white supremacy. Such a model, is of course, the only way to affect change, especially when it comes to environmental issues.

The next segment of the symposium was comprised of several presentations. The first of which was entitled “Promoting Equity, Economic Opportunity, and Social Justice for Marginalized Communities.” followed by a presentation called: “Eco-School Network: Shaping a Culture of Sustainability in Elementary Schools.” Both of these presentations provided great insight into how one must be mindful of all people as we develop strategies for sustainability.

The afternoon had two sets of breakout sessions, which covered over 15 topics ranging from Campus Beekeeping to the fight against single use plastics. The breakout sessions were a great way to focus on sustainability efforts tailored to student’s specific interests. When the breakout sessions drew to a close, Suvari Chaturvedi brought it all together with her closing keynote presentation: “Sustainability and Women’s Empowerment”. Suvari is a UN Adviser/Consultant in international development, gender equality, and women’s empowerment and her talk was focused on much of the great work she has been involved with across the world to further these issues.

In all, the day was a great success and GPSEN’s signature event, the Sustainability Symposium was well attended and brought great information and direction to sustainability efforts in the greater Portland area.