Habitats and Species of the RCESC

The Rock Creek Environmental Center contains several different types of habitat – each supporting a diverse community of plants, animals and fungi. The map below shows the general location of the habitat types. The RCESC is located on the edge of the Urban Growth Boundary (UGB), shown as a red line on this image. Within the UGB, residential housing developments are being built along the eastern border of the RCESC, making the habitat provided on the PCC campus even more critical for native plants and wildlife. 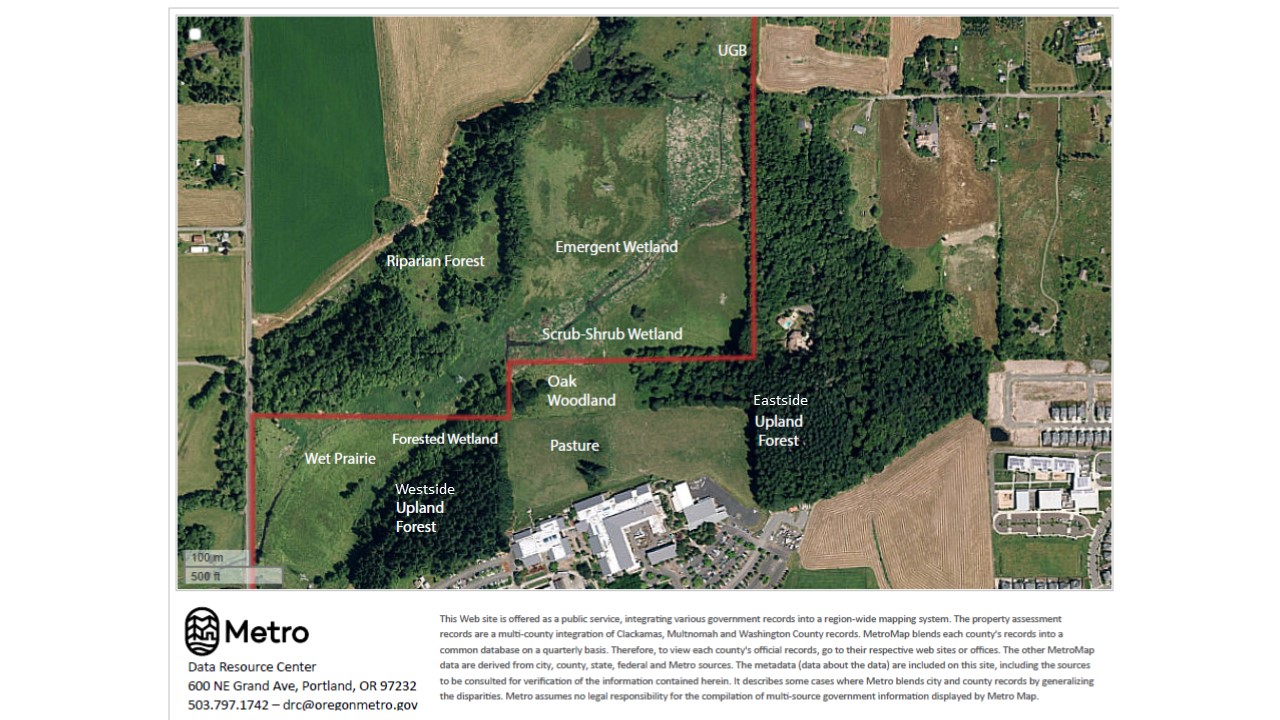 Upland Forest
The westside and eastside upland forests have a closed canopy forest dominated by Pseudotsuga menziesii (Douglas-fir), the most common conifer and Acer macrophyllum (bigleaf maple) the most common deciduous tree. The area was logged in the 1920’s, the current tree cover is second growth.

Wet Prairie
The wet prairie at RCESC is dominated by grasses and inter-mixed rushes and sedges, as well as native flowers, such as Camas. The area is adjacent to ash forested and emergent wetlands.

Ash Forested Wetland
This bottomland forest is dominated by Oregon ash, beaked hazelnut, red alder and Scouler’s willow as well as several species of shrubs (e.g. cascara, Douglas hawthorn, Pacific ninebark). The area has saturated soil for much of the spring and into the summer.

Emergent Wetland
The emergent marsh receives water from Rock Creek during high flows and from adjacent springs. This area is undergoing active restoration, focused on reducing the invasive reed canarygrass, and encouraging native rushes and sedges. Native amphibians lay their eggs in the emergent wetland in the winter and early spring.

Scrub-Shrub Wetland
This wetland community consists of native wetland-adapted shrubs such as willows, red osier dogwood, Pacific ninebark, twinberry and others planted as part of our restoration efforts.

Oak Woodland
Oregon white oak (Quercus garryana) trees provide habitat to dozens of species of birds and mammals. This habitat is being actively restored to reduce competition between oaks and existing ash trees, and encourage regeneration of young oak trees.

Riparian Forest
A channel associated with Rock Creek flows on the northwest side of the property. The channel is lined by riparian forest , with trees adapted to growing in water-saturated soil. The stream is utilized by various waterfowl, and several species of fish.