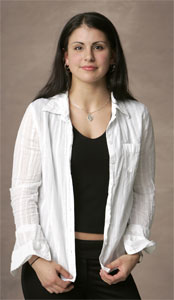 Graduate Kathryn Fricia has fire fighting in her blood. The 19-year-old transplant from Tillamook is the daughter of the town’s retired fire marshal of 34 years.

Fricia began doing volunteer fire fighting in her hometown when she was 16, like the rest of the five kids in their family. But she wanted to take it a step further. Fricia decided to follow in her father’s footsteps professionally and moved to Portland to enter the Fire Protection Technology (then called Fire Science) and EMT/ Paramedic programs at PCC. She lived at home during her first year of college to save money and take general ed courses at Tillamook Bay Community College before transferring to PCC.

Fricia applied for and received two scholarships from the Foundation – the Albert E. Jones Memorial and Women in Fire Science.

She worked part-time in retail and went to PCC full time. “As a working college student, we all know that work, classes, and studying are difficult things to combine,” Fricia said. “With the help of these scholarships awarded to me, a large burden has been lifted off my shoulders.”

“Every bit along the way helps tremendously,” she added.

The Hillsboro resident volunteered on Saturdays at the Belmont Station Fire Museum, giving tours, dispensing fire prevention information, and sharing a bit of the station’s history. Her volunteer work was coordinated through the PCC Student Firefighters Association.