Story and Photos By PCC Communications.

As students return to in-person learning this fall, they are getting to watch a historic Portland Community College structure change before their eyes.

The 100,000-square-foot renovation of the Health Technology (HT) Building at the Sylvania Campus in Southwest Portland is the largest project from the 2017 bond. Built in the late 1960s, the HT Building was in need of a facelift to meet technology, learning and support needs of the college’s students.

“The project is really coming together,” said Gary Sutton, the senior project manager for the Office of Planning & Capital Construction. “With staffing onsite at its peak, there are many activities happening all at the same time.” 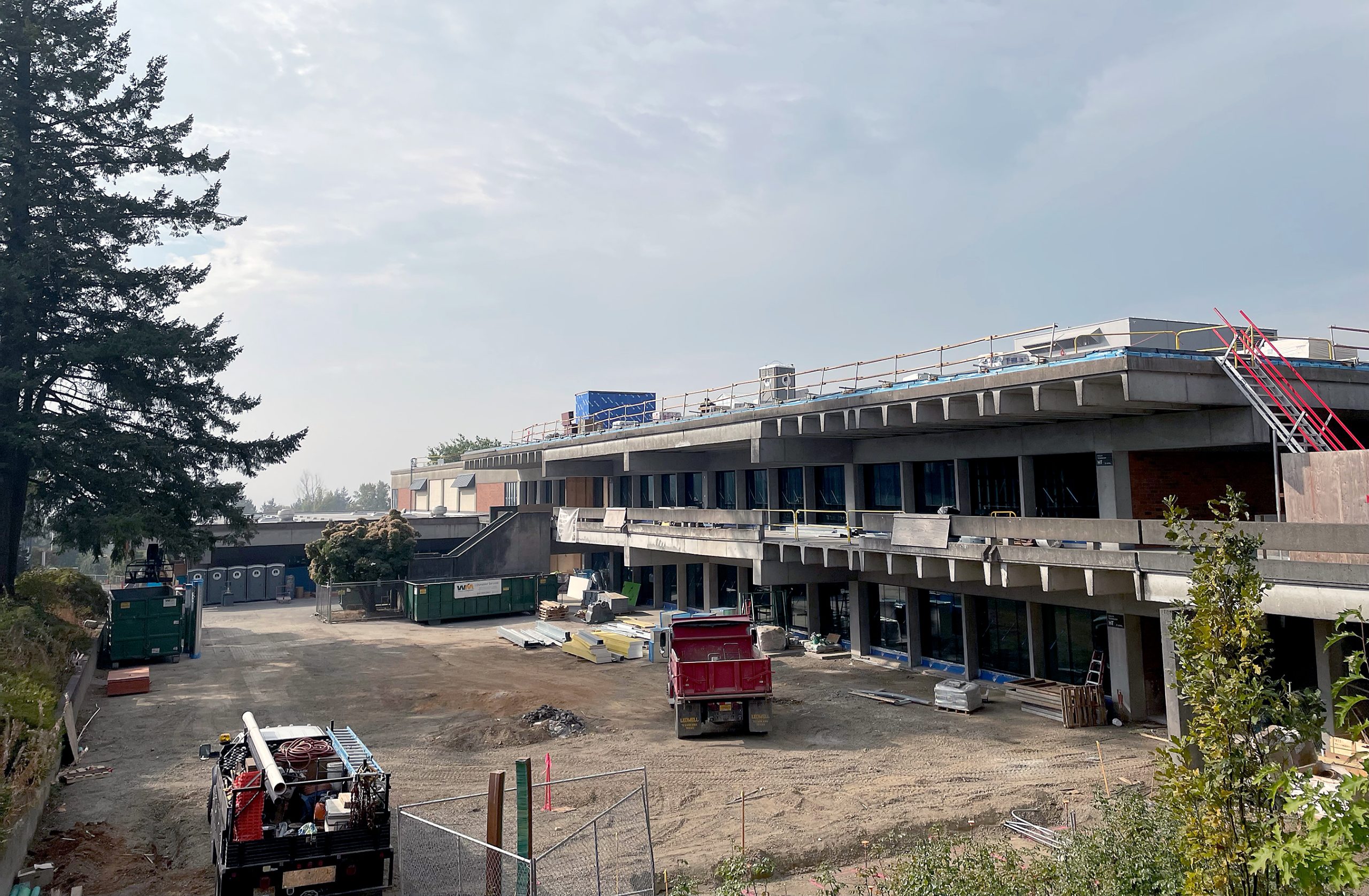 Portland Community College will have a $450 million bond measure on the Nov. 8 election ballot. If voters pass the proposed bond, funds would go directly to projects that will improve access to higher education. If passed, it is estimated the measure would maintain current tax rates for local homeowners. If it doesn’t, the proposed services would not be provided and the tax rate would decline.

Sutton said that there has been a lot of visible progress on the building in the past few months. The contractor has completed all of the demolition, seismic and structural work, including the majority of the mechanical, electrical and plumbing rough-in. The new air handler was installed on the roof late last month.

In addition, the exterior glazing is nearly complete around the building perimeter with the new skylight being installed and roofing scheduled to be finished later next month.

He said the building is essentially “dried in,” which means the contractor can begin the interior finishes. That work includes the wall framing, sheetrock and ceiling systems. The scope of this job will continue through the end of the year, with the contractor beginning on the first floor and working their way up to the third floor.

The renovation project has included a build-out of many programs, including architecture, interior design, nursing, medical imaging and radiography, physical education and exercise science.

Until 2021, the biology labs used to be nested in the HT building, but have moved to renovated space in Sylvania’s Science Technology (ST) Building. The biology suite built on the second floor of ST was completed last year and provides the program with six brand new science laboratories: two general biology labs, two anatomy and physiology labs, one microbiology lab, and one flexible lab. Each of these labs features state-of-the-art work stations for students to train and hone their skills.

“By moving some of the existing programs out of the building into more suitable spaces on campus, we’re able to free up space within the HT Building, creating new and vibrant student collaboration spaces while also providing the remaining programs more space to grow,” Sutton said.

PCC has already replaced the older HT medical imaging lab with a brand functional space. Gayle Wright, radiology instructor, said the 7,500-square-foot facility is an upgrade from its previous cramped space on the third floor of the structure. The new open layout in the centralized suite provides students the space they need to learn and practice their skills, while also allowing for future expansion of the program. 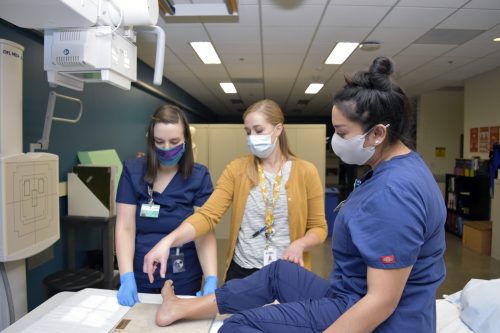 “The upgrades in the lab are just monumental,” Wright said. “We have four stations instead of the previous three, the footprint is about quadrupled, and the equipment is all brand new.”

In addition to ST, the Automotive Metals (AM) Building and its systems received several deferred maintenance improvements to the mechanical and exhaust systems as well as replacement of the electrical gear and the remodeling of some existing classrooms to accommodate physical education classes during the HT renovation. Once HT is completed, this space will be fitted out as a large new classroom for the engineering department.

As part of all of this work, the campus will receive site improvements to enhance campus safety, accessibility, transit and connectivity. Plus, campus sustainability will be improved with increased landscaping and stormwater retention, and additional trees will extend the tree canopy, which can help cool temperatures in parking areas.

The planning for the renovation has involved extensive stakeholder engagement with the building’s current tenants and college community.

For more details on work at the Sylvania Campus, visit www.pcc.edu/bond/current-projects/sylvania/.